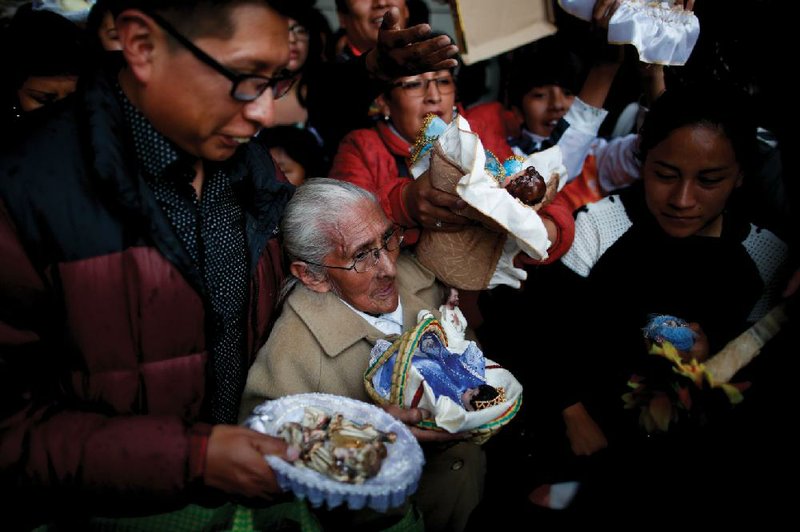 People wait their turn to have their baby Jesus dolls blessed by a priest as they leave the Three Kings Day Mass at San Francisco Church in La Paz, Bolivia. Outside the church, many parishioners went to indigenous guides to get additional blessings that come from the country’s belief in the Pachamama, or mother earth deity.

LA PAZ, Bolivia — Hoisting a large leather Bible above her head, Bolivia’s new interim president delivered an emphatic message hours after Evo Morales fled under pressure, the end of a nearly 14-year presidency that celebrated the country’s indigenous religious beliefs as never before.

“The Bible has returned to the palace,” bellowed Jeanine Añez as she walked into the presidential palace where Morales had jettisoned the Bible from official government ceremonies and replaced it with acts honoring the Andean earth deity called the Pachamama. The conservative evangelical senator, from a region where people often scoff at Pachamama beliefs, raised the Bible above her head and flashed a smile.

While Bolivians are deeply divided on Morales’ legacy, his replacement, a lawyer and opposition leader who wants to make the Bible front and center in public life, is reigniting deep-rooted class and racial divisions at a time of great uncertainty in the Andean nation, where 6 in 10 identify as descendants of native peoples.

“It’s the same as 500 years ago when the Spanish came and the first thing they showed the indigenous people was the Bible,” said Jose Saravia, a civil engineer and married father of three children from La Paz. “It seems to me like the same thing is happening again.”

Like many in Bolivia, Sara-via is a practicing Catholic who weaves in Pachamama beliefs passed down from his parents and grandparents. About 8 in 10 in Bolivia are Catholic, according to the most recent estimates.

Saravia and his family were among droves of people who came carrying their immaculately dressed baby Jesus dolls to fill a large Catholic church in La Paz to take part in Three Kings Day Masses on Jan. 6. As they slowly left the 18th-century church, a Catholic priest splashed their relics with holy water.

Just feet away from the church in a bustling plaza, parishioners stopped to have their baby Jesus dolls blessed by indigenous elders in an act Bolivians believe shows respect for Pachamama and brings blessings in return.

A symbiotic relationship has emerged over time. It allows Catholics and Pachamama believers to maintain both systems, said Mariano Condori Flores, one of the indigenous guides doing the blessings.

Flores said the same relationship doesn’t exist with evangelicals, who tend to take a hard line against mixing beliefs and account for about 7% of the population, more than double their size in 1970, according to self-reported membership figures compiled by the World Christian Database.

For many upper-class conservatives in the capital of La Paz, and in outlying provinces where people grew tired of Morales’ campaign to increase visibility and prominence of the indigenous religious beliefs, Añez’s reintroduction of the Bible is being celebrated.

“It was a demonstration of grand respect for Bolivian people. We are believers in God,” said Karina Ortiz Justiniano, a psychologist and mother from the province of Beni, where Añez resides. “The government of Evo Morales was way too aggressive, especially for those of us here in the eastern region that don’t believe in the Pachamama.”

Sentiments like that provoke a strong reaction from Bolivians who embrace their Incan heritage. They fear that the discrimination they felt under previous presidents of European descent will return to this often-overlooked South American country of 11 million people situated between Peru, Chile, Brazil and Argentina.

FEAR FOR THE FUTURE

Morales raised the self-esteem of Bolivians of indigenous roots, allowing them to look the upper class, lighter-skinned Bolivians eye-to-eye, said David Mendoza Salazar, a Bolivian sociologist with expertise in indigenous culture. In Añez, many see a lighter-skinned, upperclass evangelical they don’t feel they can trust, and fear for the future.

“In the memory of the citizenry, the exploitation of the Spaniards is internalized,” said Salazar, from his home on one of the steep hills in La Paz, a city of about 900,000 people that sits at 12,000 feet elevation.

Morales fled Bolivia in November after losing the support of the military and police amid widespread protests over a disputed election.

Añez announced last week that she will run for a full term in the May 3 presidential election, despite saying previously she would only serve in the interim to bring stability to the country. Critics say she represents the Bolivian archetype that flourished before Morales became the nation’s first indigenous president in 2006. Indeed, one of the leading presidential candidates for the redo election in May, Luis Fernando Camacho, has built his campaign on the idea of restoring the prominence of Catholicism. Another candidate, Chi Hyun Chung, an evangelical minister, described Pachamama beliefs as paganism and diabolic in an interview last year.

Morales commonly spoke against what he considered discrimination that dated to the Spanish conquest in 1520, describing his presidency as the “decolonization” of Bolivia.

Spanish conquistadors crushed strong resistance and enslaved hundreds of thousands of Aymara and Quechua Indians to work a huge silver mine as they settled the highland capital of La Paz. Until a revolution in 1952, indigenous people couldn’t even walk on the plaza in front of the presidential palace Morales occupied, let alone vote.

During a 2015 a trip to Bolivia, Pope Francis apologized for crimes of the Roman Catholic Church against indigenous people during the conquest of the Americas.

Morales revamped the Bolivian constitution in 2009 to formalize religious liberty protections and make the country a secular state, stripping special recognition previously given to the Catholic Church. None of the presidential candidates for the May election have unveiled their policy plans or talked about rolling back Morales’ changes to the constitution making the country religiously neutral.

Añez declined to be interviewed by The Associated Press but told a Bolivian newspaper in December that she will respect indigenous beliefs. But she said if Christians like her had to endure the Bible being taken out of the presidential palace and respect that some people didn’t believe in God, now others should respect her devotion to God.

The weaving of Catholicism and Pachamama can be found, among other places, on the shores of Lake Titicaca in the small town of Copacabana. Bolivian families come to hike up a mountain overlooking the lake along a rocky trail dotted with large crosses.

At the top, they buy miniature replicas of houses and cars and place them in tiny plots of land next to a rock wall at the edge of the cliff overlooking the majestic lake. Indigenous spiritual guides toss coca leaves and pour beer in a ceremony similar to that on Three Kings Day to show gratitude to mother earth.

Below the mountain in the town outside a large and elaborate Catholic church, people line up cars to get blessings from Catholic priests who splash holy water on the cars and say a prayer with the family.

Marcela Chachaqui, of Oruro, Bolivia, has come once a year since she was 9 years old and now carries out the tradition with her husband and three children. They hiked the mountain the first day of the trip and had their car blessed by the priest the next morning. She’s worried about a diminished emphasis on her country’s unique fusion of beliefs in the post-Morales era in Bolivia.

“You have to always believe in the Pachamama,” Chachaqui said. 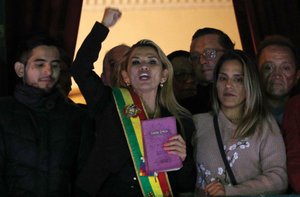 Photo by AP/Juan Karita
In this file photo, the Senate’s second vice president and opposition politician Jeanine Añez, (center), wearing the presidential sash and carrying a Bible, addresses the crowd from the balcony of Bolivia’s Quemado palace after she declared herself interim president of the country in La Paz.