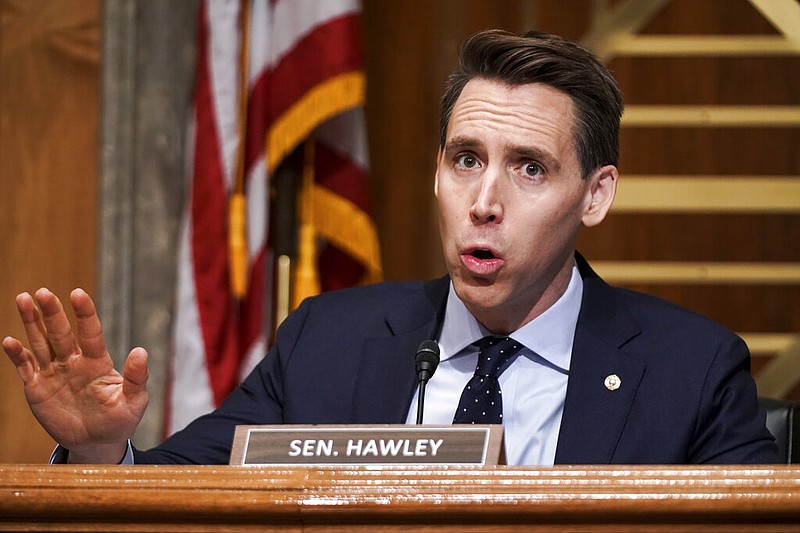 FILE - In this Dec. 16, 2020 file photo, Sen. Josh Hawley, R-Mo., asks questions during a Senate Homeland Security & Governmental Affairs Committee hearing to discuss election security and the 2020 election process on Capitol Hill in Washington. Walmart apologized on Wednesday, Dec. 30, for a tweet that called Hawley a sore loser for contesting the U.S. presidential election. The tweet from Walmart was in response to Hawley’s tweet announcing his plans to raise objections next week when Congress meets to affirm President-elect Joe Biden’s victory in the election. (Greg Nash/Pool via AP, File)

The now deleted tweet, "Go ahead. Get your 2 hour debate. #soreloser," was mistakenly sent by a member of Walmart's social media team who meant to publish it on their personal account, the company said.

The tweet was a response to Hawley's announcement that he plans to raise objections next week when Congress meets to affirm Biden's victory. The objections won't alter the election results, but it could delay the certification of Biden's win.

"We have removed the post and have no intention of commenting on the subject of certifying the electoral college," Walmart said in a prepared statement. "We apologize to Senator Hawley for this error and any confusion about our position."

President Donald Trump has, without evidence, said there was widespread fraud in the election and has pushed Republican Senators to back him up. But the Electoral College has already cemented Biden's 306-232 victory and numerous court challenges have been thrown out or rejected.

Still, Hawley responded to Walmart with his own tweets Wednesday, asking the company if it would "apologize for using slave labor," and for the "pathetic wages you pay your workers as you drive mom and pop stores out of business."

Walmart and other major retailers like Target and Amazon pay well above the federally mandated minimum wage.