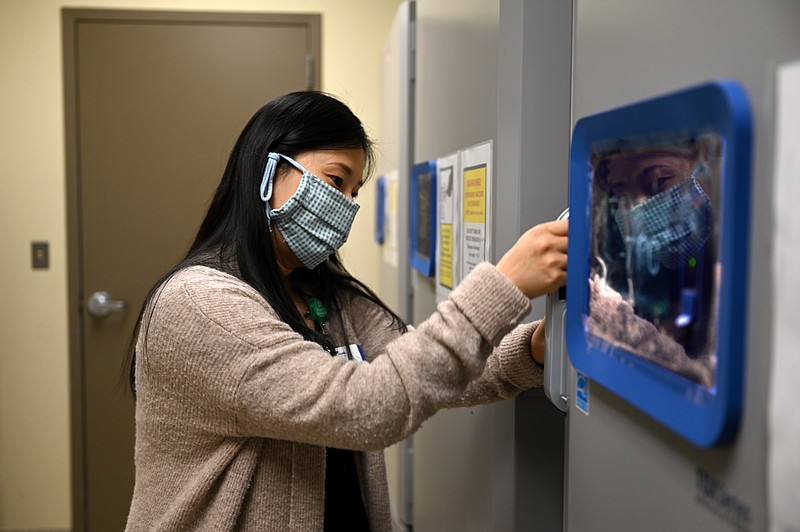 FILE -- In this file photo, Hyejin Son, Director of Pharmacy at Baptist Health, opens one of the three new refrigerators that will be used to store doses of the coronavirus vaccine on Friday, Dec. 11, 2020. (Arkansas Democrat-Gazette/Stephen Swofford)

FAYETTEVILLE -- Hospitals in Northwest Arkansas are continuing to vaccinate their staffs against covid-19. Long-term care facilities such as nursing homes are next.

The first shipments of the Pfizer vaccine arrived at hospitals in the region about two weeks ago.

Mercy Health System had given more than 1,400 vaccinations as of Tuesday morning and is continuing to give its first round, according to Jennifer Cook, spokeswoman. Mercy received two shipments of the Pfizer vaccine that were expected to be 975 doses each.

However, Mercy and other hospitals in the region have said many of the vials of the vaccine contained six doses instead of the five as expected, meaning they've been able to vaccinate more staff sooner.

Northwest Health, which has five hospitals in the region, has given more than 1,100 doses of its first batch of 1,650 doses and plans to finish distributing those within the next few days, according to Aimee Morrell, spokeswoman.

"We have already received second batches of vaccine at several of our hospitals and will proceed with distributing these as well," Morrell said.

All of the hospitals plan to vaccinate their entire staffs, but are taking a tiered approach beginning with staff in direct contact with covid-19 patients and then staff treating any patients. Mercy and Northwest Health have already begun vaccinating other frontline workers, such as emergency medical technicians, who come in contact with patients, but are not employed by the hospitals.

Once Washington Regional has enough to vaccinate all of its employees and medical staff as directed by the Arkansas Department of Health, it plans to offer vaccines to other front line workers, according to a statement from the center.

The Pfizer vaccine requires a second dose 21 days after the first.

"We anticipate receiving weekly shipments sufficient to ensure second doses for all who have received an initial dose and to expand availability for additional individuals to be vaccinated for the first time," according to Hardin.

Mercy expects to receive its first shipment for the second dose this week, according to Cook.

Apple Creek Health and Rehab in Centerton and Bradford House Nursing and Rehab in Bentonville began vaccinations Tuesday, according to the Arkansas Health Care Association. The number of how many vaccinations done at each facility wasn't available Tuesday evening. Both of the facilities used Springdale-based Premier Pharmacy Care to administer the vaccines, according to Mayci Blankeship, spokeswoman at the association.

The state had received 25,100 doses of the Moderna vaccine for residents and staff at long-term care facilities as of Monday, said Dr. Jennifer Dillaha of the Health Department. The amount won't cover all residents and staff in the state, but Dillaha added Walgreens and CVS pharmacies will receive additional vaccines to distribute.

The 25,100 doses were shipped directly to local pharmacies, Dillaha said. Long-term care facilities had the choice of going through the state or Walgreens or CVS, which are both distributing vaccines as part of a federal program.

Long-term care facilities generally partner with pharmacies to administer flu shots, so many of them chose to get the covid-19 vaccines from pharmacies they already work with, she said.

Gov. Asa Hutchinson said Tuesday during his weekly news briefing the state received 31,700 doses of the Moderna vaccine and about 1,680 of those had been administered. Hutchinson said he wasn't satisfied with the pace of vaccine distribution to long-term care facilities and asked large pharmacies to help get residents and staff in the facilities vaccinated as soon as possible.

Neither representatives from the Health Department nor the Arkansas Pharmacists Association were able to verify how many of the vaccines already distributed were at Northwest Arkansas long-term care facilities as of Tuesday.

John Vinson, pharmacist and chief executive officer at Arkansas Pharmacists Association, said local and Arkansas-based pharmacies, many of which just received their first shipments, are working to get the vaccines to staff and residents as quickly as possible.

He said the logistics of getting vaccines to people in long-term care facilities has been somewhat complicated because many residents need guardians to sign consent forms before they can receive the vaccine.

Long-term care facilities are encouraging, but not requiring, staff to get vaccinated, Dillaha said. The case was similar with hospitals and the Pfizer vaccine.

The Moderna vaccines require patients to receive a second dose 28 days after the first. Vinson said he projects all long-term care facility staff and residents will have received their first doses by mid-January and second doses by mid-February.

Hospitals in Benton and Washington counties had a combined total of 108 covid-19 patients as of Monday.