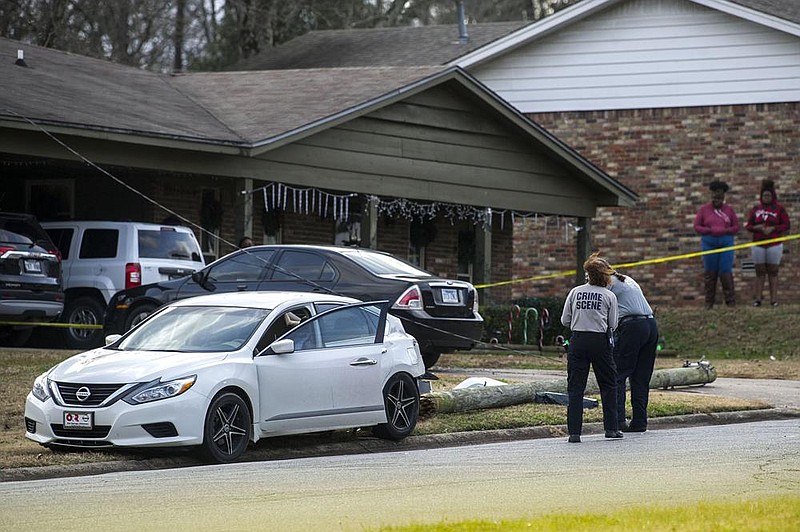 Officers investigate the scene of a homicide in the 8400 block of Labette Drive in Little Rock on Sunday. The homicide was one of four in a 24-hour period in Little Rock.

After a weekend in which four homicides were reported in a 24-hour period, Little Rock's police chief said the city is seeing the same kind of uptick in killings that the rest of the country is experiencing.

"We are right there with what we call national standards. We've seen a 42% increase in violent crimes in the nation," Chief Keith Humphrey said at a news conference called Monday in the wake of the weekend homicides. "That doesn't make it any better for the city of Little Rock. However, we realize this has been a rough year for everyone."

Compared with January-June 2019, the first six months of 2020 saw a 14.8% increase in the number of murders and nonnegligent manslaughter offenses, while aggravated assaults were up 4.6%, according to an FBI report released in September.

In Little Rock, 55 people have been killed this year. Forty-three people were killed in 2019.

In the weekend homicides, the victim and suspect appear to have known each other in each incident, Humphrey said.

Police arrested a man Saturday afternoon in the killing of his wife at 2723 Longcoy St. They were directed to the house by Quincy Harris and found Kimeisha Harris dead on the living room floor from a gunshot wound. Children were present.

"Our hearts go out to the family and friends of the victims ... There's never a good time for anyone to lose their life, but the fact this occurred during the holidays, it just adds to the tragedy," Humphrey said. "There are little boys whose mother fell victim to homicide during the Christmas holidays. That affects all of us here today, personally and professionally. We're going to continue to make sure these individuals are going to be identified and arrested."

[Video not showing up above? Click here to watch » https://www.youtube.com/watch?v=p8shHkl-fsU]

Homicide detectives and crime scene search unit specialists began investigating. A gun was found in the home, according to a news release.

The killing was the result of a domestic violence incident, Humphrey said. After interviews and analysis were conducted, Quincy Harris was arrested on charges of first-degree murder and possession of a firearm by certain persons. He is a convicted felon, according to the arrest report.

He was being held at the Pulaski County jail Monday with no bond set.

Officers also discovered a woman hiding in the shower. She was not injured and was questioned by investigators, police spokesman Mark Edwards said, but could not comment further.

On Geyer Springs Road, officers found Michael Oliver, 47, dead in an apartment after responding to a 6 a.m. call regarding a man who was passed out in a pool of blood, Humphrey said.

Police are working to develop a suspect. Again, Humphrey said it appears the victim knew his killer.

"Now that doesn't justify or make it any better. But we want citizens to know we don't have anyone walking around that's targeting anyone," he said. "I want to repeat that the victims and suspects knew each other in some manner."

On Sunday, police responded to a car accident call just after 1 p.m. in the 8400 block of Labette Drive.

They found Zachary Ester, 24, shot in the driver's seat of a car. Aid was given, but Ester was pronounced dead at the scene, Humphrey said.

All investigations are ongoing, Humphrey said.

While Humphrey did not elaborate on possible motives for each of the killings, he said, "We have a conflict resolution problem here in our city, made obvious by what's going on this past weekend. We need to figure out a way to ensure people find a way to agree to disagree in not such a violent way."

"Our officers are working extremely hard," Humphrey said. "We know we're going to be able to identify these individuals, but we need the community's help. If you know anything -- we started this in 2019 -- 'See something, say something.'"

The pandemic may play a role in these and other violent crimes this year, he said.

The department will work on methods to address the conflict resolution issues he says lead to violent crimes and spread the word about the resources available, he said.

Humphrey also said at the news conference he is looking to establish an antiviolence task force of educators, nonprofit leaders, civil rights leaders and ministers to "see how we can come up with a better game plan of reducing our crime."

"See something, say something" also extends to any incidents of domestic violence someone may be aware of, he said.

"We continue to urge anyone who knows any type of situation where someone is in a relationship or someone is being threatened or feels they are in danger -- we continue to ask our citizens to reach out, to call 911," he said.

Humphrey referred to the Major Crimes Division's Victim Services Unit, which is responsible for providing information and referral services to victims of violent crimes. Grant funding last year allowed the unit to add five more advocates to the unit, bringing its staff to eight. There is also a related volunteer program.

Humphrey also brought up the department's impact unit that focuses on violent crimes.

"We are hitting those areas that we know, that the data shows, that we have a probability of violent crime occurring," Humphrey said.

However, crimes like this weekend's happen "behind closed doors" and authorities don't know something is amiss unless it's reported, he said.