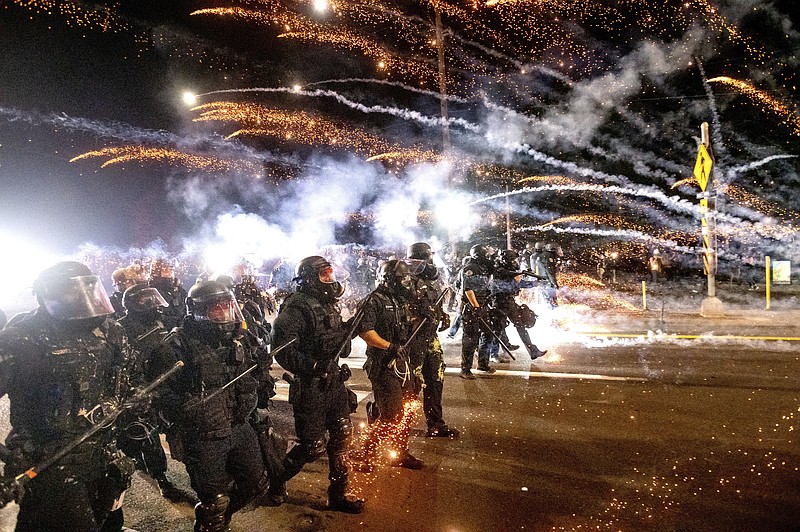 Police use chemical irritants and crowd control munitions to disperse protesters during a demonstration in Portland, Ore., Saturday, Sept. 5. Hundreds of people gathered for rallies and marches against police violence and racial injustice in Portland in often violent nightly demonstrations after George Floyd was killed May 25. (AP Photo/Noah Berger, File)

When the coronavirus pushed people out of the world and into homebound isolation, the small screen's role grew bigger than ever.

Television and its mobile iterations bore witness to a tumultuous year of presidential politics, the pandemic and racial reckoning, including the agonizing scene of a man begging police for his life that galvanized Black Lives Matter protests.

TV hosted a growing number of entertainment choices, as old-guard Netflix and Hulu were joined by new streaming services — ready to receive movies intended for blockbuster status but deprived by shuttered theaters.

Most crucially, the medium substituted for the connection that was stripped from nearly all but essential workers as offices, stadiums and other gathering spots were left deserted. In their place, came TV accounts of the emotional toll paid by those in health care; of economic despair; and the affection for a game show host. And, for diversion, a sexy thriller and a celebrity confession.

Here are some of 2020's defining moments.

◼️ George Floyd. It was more than a moment. For nearly eight minutes, Minneapolis police officer Derek Chauvin knelt on the neck of George Floyd, ignoring pleas for mercy until Floyd's life slipped away. Brave observer Darnella Frazier, then 17, held up a phone camera so a sickening and infuriating video record of Floyd's death was preserved. The images led to worldwide protests, for the first time engaging many people who considered the issue of police misconduct mostly abstract. 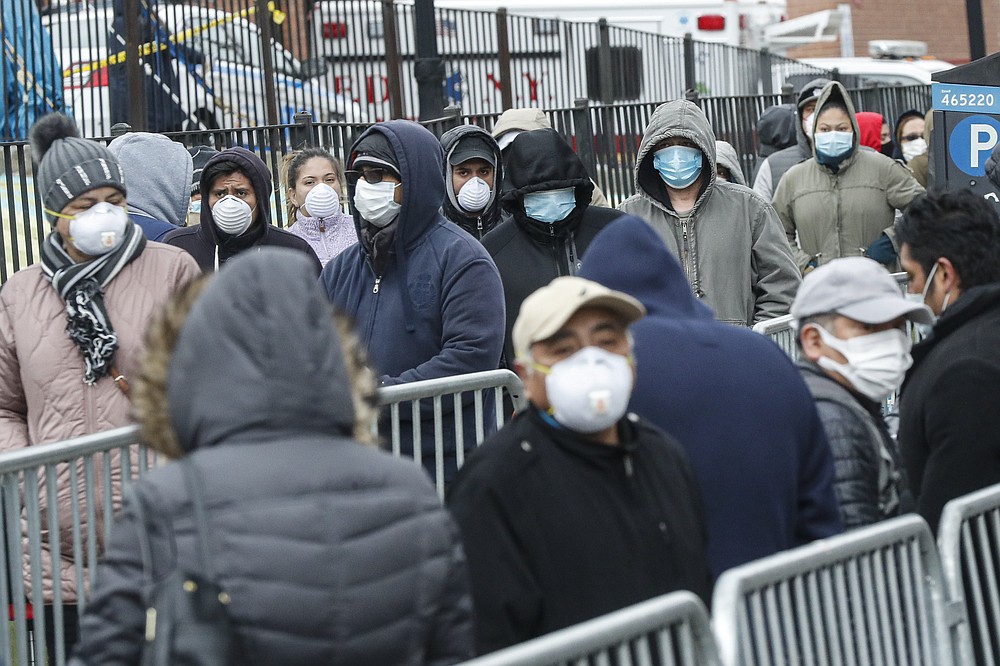 ◼️ Hospital Overload. Weary nurses and doctors treating coronavirus-stricken patients poured out their frustration as hospitals were overwhelmed by the surging disease and the staggering number of lives that couldn't be saved. "I'm broken. My colleagues are broken," a tearful Joey Traywick, an ICU nurse in Billings, Mont., told NBC News. "People say it's not that big a deal, and I want to take them by the collar and say, 'You don't know what you're talking about.'"

◼️ Presidential Debates. "Let me finish," Democrat Joe Biden said, trying to answer a question early in his first debate with Republican President Donald Trump. We're still waiting. Trump's tactic of constantly interrupting his opponent made the debate an unwatchable mess for 73 million viewers, and polls showed it backfired on him. Moderator Chris Wallace had little chance. This raised the stakes for later candidate forums, where NBC's Savannah Guthrie and Kristen Welker bolstered their reputations with sharp, in-control performances.

◼️ Lining Up. Soup lines were an indelible part of the early 20th century's Great Depression. That extreme need was recalled by images of Americans lined up — in cars, to guard against the pandemic — for the food they couldn't afford to buy in a virus-crashed economy. The startling images were matched by drone shots of jammed roadways leading to drive-through coronavirus testing. A more hopeful image for what's ahead: conveyer-belt lines of vials to be filled with covid-19 vaccine. 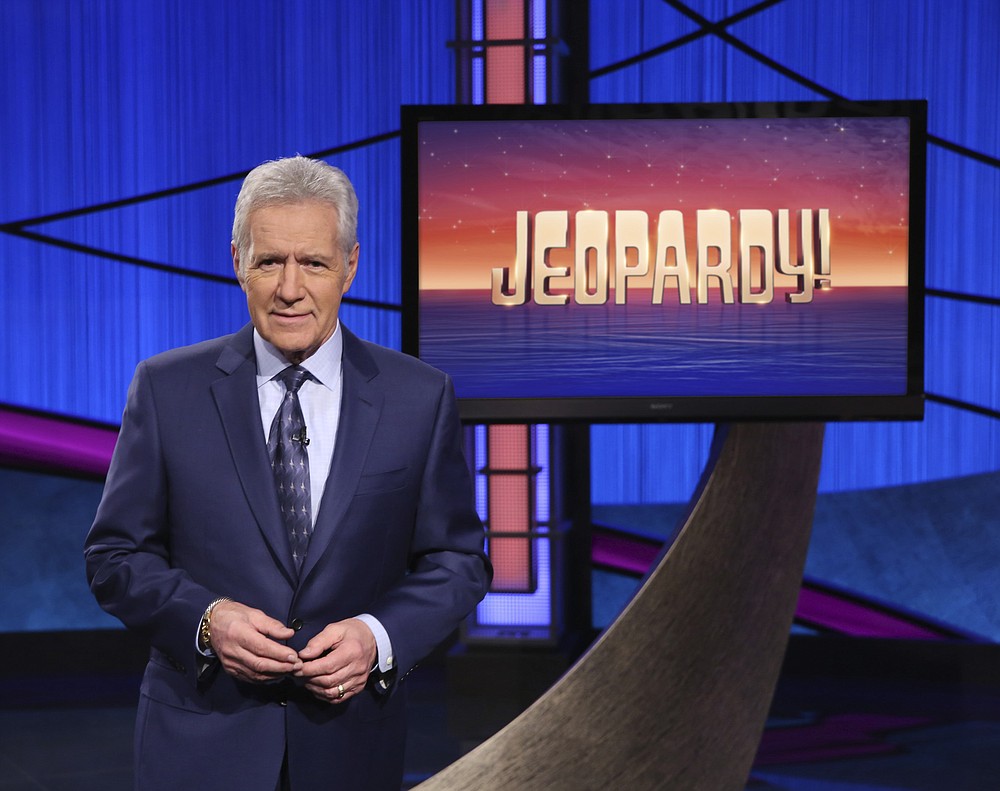 Alex Trebek, host of the game show “Jeopardy!”, made no secret of the fight with pancreatic cancer that claimed his life on Nov. 8. If there was any good to come of it, he inspired others and learned how much he was appreciated and loved. (Jeopardy! via AP)

◼️ Alex Trebek. The "Jeopardy!" host made no secret of the fight with pancreatic cancer that claimed his life Nov. 8. He inspired others and learned how much he was appreciated and loved. January's "Greatest of All Time" tournament was a fitting tribute to his skill. We're cheating here — since it was televised late in 2019 — but no one who saw Trebek choke up in reaction to contestant Dhruv Gaur's "We love you, Alex" message will ever forget the moment.

◼️ "Hamilton." When Broadway king Lin-Manuel Miranda and his hit musical about founding father Alexander Hamilton debuted on the new Disney + streaming service before its intended 2021 theater release, it demonstrated how critical streaming platforms are to the fortunes of their parent companies. NBCUniversal's Peacock and WarnerMedia's HBO Max also joined the battle this year for a piece of TV's future.

◼️ Kornacki and King. Between Election Day and the morning, four days later, when most news organizations declared Joe Biden the president-elect, NBC News' Steve Kornacki and CNN's John King were babysitters and human calculators for a nation on edge. They stood before video screens crunching numbers as votes trickled in, soothing or creating anxiety. These tireless men were indispensable.

◼️ Academy Awards. February's Oscars provided the usual spectacle of celebrities striking red-carpet poses and exchanging air kisses en route to a packed theater. It was the last hurrah before the pandemic banished other awards shows to virtual incarnations, some as glamorous as a Zoom meeting. If we'd known the movie awards were a final chance for a communal night of unfettered stargazing, would only a record-low 23.6 million of us have tuned in?

◼️ "The Undoing." The climax of "The Undoing" on HBO was a classic TV event, a murder mystery that built viewership and interest until the killer's identity was revealed on Nov. 30. But it's a reflection of how television is consumed in 2020 that, even now, we won't say who the murderer was for fear of angering readers. Millions of viewers will see the story resolved on their own time, creating countless individual moments rather than a communal one.

◼️ The Smiths. Jada Pinkett Smith was ready to address social-media speculation about her former ties to musician August Alsina, and Will Smith was listening. So were viewers of Pinkett Smith's Facebook Watch series "Red Table Talk," becoming witnesses to an intimate exchange at a time of social and emotional distancing. The actors were conciliatory toward each other about what occurred during a marital separation, but Will Smith couldn't resist revising his wife's description. "An entanglement? A relationship," he said.