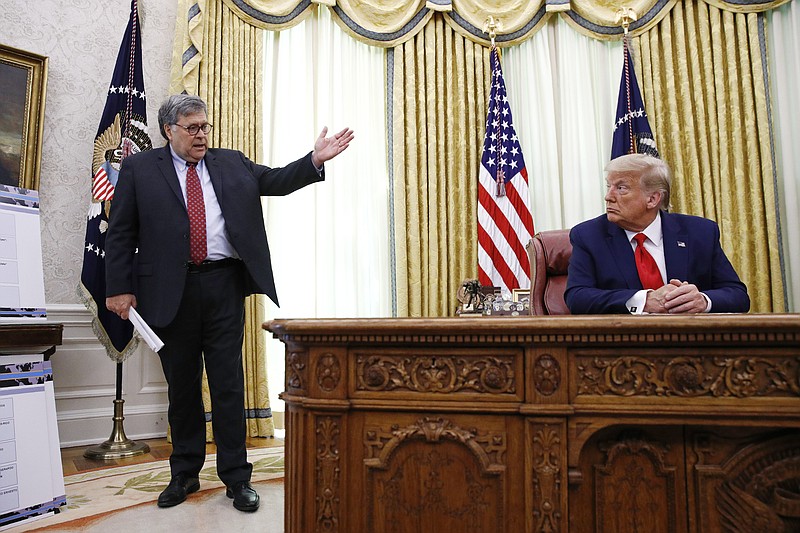 FILE - In this July 15, 2020, file photoAttorney General William Barr, left, speaks with President Donald Trump during a a law enforcement briefing on the MS-13 gang in the Oval Office of the White House in Washington. (AP Photo/Patrick Semansky, File)

WASHINGTON -- Attorney General William Barr used his final public appearance to undercut President Donald Trump on multiple fronts Monday, saying he saw no reason to appoint a special counsel to look into the president's claims about the 2020 election or to name one for the tax investigation of President-elect Joe Biden's son.

During the news conference, Barr also reinforced the belief of federal officials that Russia -- not China, as Trump suggested -- was behind the hacking of U.S. government agencies.

Barr made the comments at a news conference to announce additional criminal charges in the bombing of Pan Am Flight 103, which killed 190 Americans, an issue he had worked on in his previous stint as attorney general in the early 1990s. He chose the announcement, in a case very personal and important to him, for his last public appearance, then took questions.

Barr said that while he was "sure there was fraud in this election," he had not seen evidence that it was so "systemic or broad-based" that it would change the result. He asserted he saw "no basis right now for seizing machines by the federal government," and he would not name a special counsel to explore the allegations of Trump and his allies.

[Video not showing up above? Click here to watch » https://www.youtube.com/watch?v=Eny2QBlB2NQ]

"If I thought a special counsel at this stage was the right tool and was appropriate, I would name one, but I haven't, and I'm not going to," Barr said.

Similarly, Barr said he would not name a special counsel to investigate Hunter Biden, the president-elect's son, who revealed earlier this month that he was under investigation for possible tax crimes. Barr said the investigation was "being handled responsibly and professionally" by regular Justice Department prosecutors, and he hoped that would continue in the next administration.

"To this point, I have not seen a reason to appoint a special counsel, and I have no plan to do so before I leave," Barr said.

Barr had been in lockstep with the president during much of his tenure as Trump's attorney general. But Trump, as he has done with many others in his inner circle, started criticizing Barr publicly. He was particularly angry that Barr didn't announce the existence of a two-year-old investigation of Hunter Biden.

And shortly before he announced his resignation, Barr said he had seen no evidence of widespread voting fraud, despite Trump's claims to the contrary. Trump has continued to push claims even after the Electoral College made Biden's victory formal Dec. 14.

A special counsel would make it more difficult for the incoming attorney general and president to close investigations begun under Trump.

Barr's statements Monday may make it easier for the acting attorney general who takes over, Jeffrey Rosen, to resist pressure from the White House to make such appointments.

In his 2019 confirmation hearing for deputy attorney general, Rosen said he was willing to rebuff political pressure from the White House if necessary. He told legislators that criminal investigations should "proceed on the facts and the law," and prosecutions should be "free of improper political influences."

"If the appropriate answer is to say no to somebody, then I will say no," he said at the time.

Trump and his allies have filed roughly 50 lawsuits challenging election results and nearly all have been dismissed or dropped. He's also lost twice at the U.S. Supreme Court.

With no further tenable legal recourse, Trump has been reaching out to allies for options as he refuses to accept his loss.

Among those allies is attorney Rudy Giuliani, who during a meeting Friday pushed Trump to seize voting machines in his hunt for evidence of fraud. The Homeland Security Department made clear, however, that it had no authority to do so. It is also unclear what that would accomplish.

For his part, Barr said he saw no reason to seize them. Earlier this month, Barr also said the Justice Department and Homeland Security had looked into the claims "that machines were programmed essentially to skew the election results" and ultimately concluded that "so far, we haven't seen anything to substantiate that."

Trump has consulted on special counsels with White House chief of staff Mark Meadows, White House counsel Pat Cipollone and outside allies, according to several administration officials and Republicans close to the White House who spoke on condition of anonymity because they weren't authorized to discuss the matter publicly.

Trump was interested both in a counsel to investigate Hunter Biden's tax dealings and a second to look into election fraud. He even floated the idea of naming attorney Sidney Powell as the counsel -- though Powell was booted from Trump's legal team after she made a series of increasingly wild conspiratorial claims about the election.

Barr also said Monday the hack of U.S. government agencies "certainly appears to be the Russians."

In implicating the Russians, Barr was siding with the widely held belief within the U.S. government and the cybersecurity community that Russian hackers were responsible for breaches at multiple government agencies, including the Treasury and Commerce departments.

Hours after Secretary of State Mike Pompeo said Russia was "pretty clearly" behind the hacks, Trump sought to undercut that message and play down the severity of the attack.

He tweeted that the "Cyber Hack is far greater in the Fake News Media than in actuality." He also said China could be responsible even though no credible evidence has emerged to suggest anyone other than Russia might be to blame.

China's government Monday criticized Trump's suggestion that Chinese hackers might be behind a cyberespionage campaign.

The foreign ministry said China opposes cyberspying and has cracked down on cybercrime.

"The United States has politicized the issue of cybersecurity without conclusive evidence and continuously spread false information and thrown mud at China in an attempt to tarnish China's image," said a ministry spokesman, Wang Wenbin.

"We hope the United States will take a more responsible attitude on cybersecurity," Wang said.

Barr's comments came on the 32nd anniversary of the Pan Am explosion over Lockerbie, Scotland, that killed 259 people in the air and 11 on the ground.

The Justice Department announced its case against the accused bombmaker, Abu Agela Masud Kheir Al-Marimi, who admitted to Libyan officials several years ago that he had built the bomb and worked with two other defendants to carry out the attack, Barr said.

Calling the news conference to announce the charges underscored Barr's attachment to that case.

He had announced an earlier set of charges against two other Libyan intelligence officials in his capacity as acting attorney general nearly 30 years ago, vowing that the investigation would continue.

Information for this article was contributed by Michael Balsamo, Eric Tucker and staff members of The Associated Press; and by Matt Zapotosky of The Washington Post. 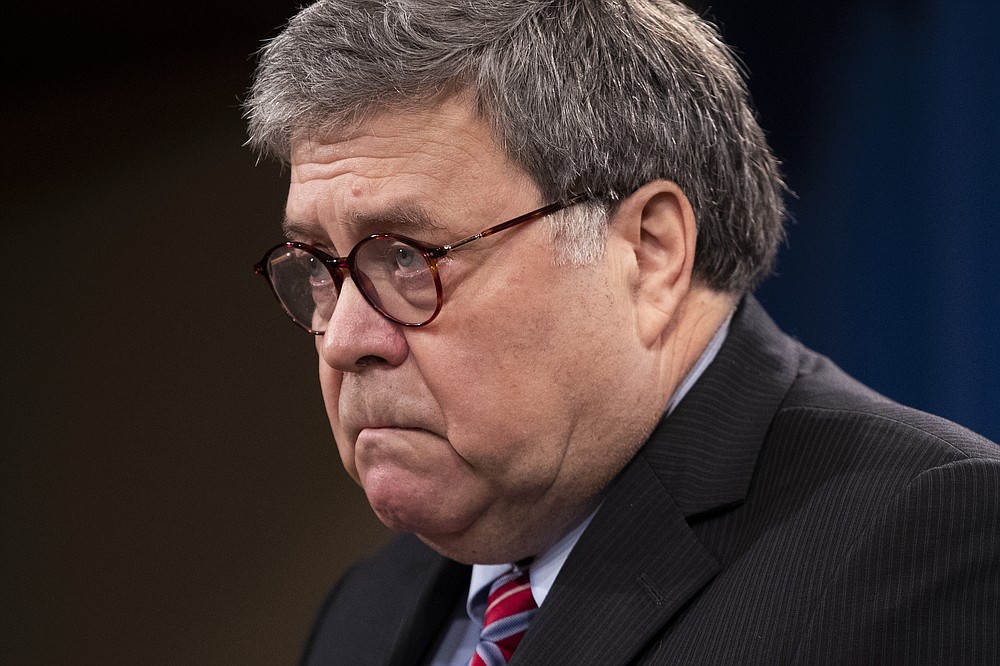 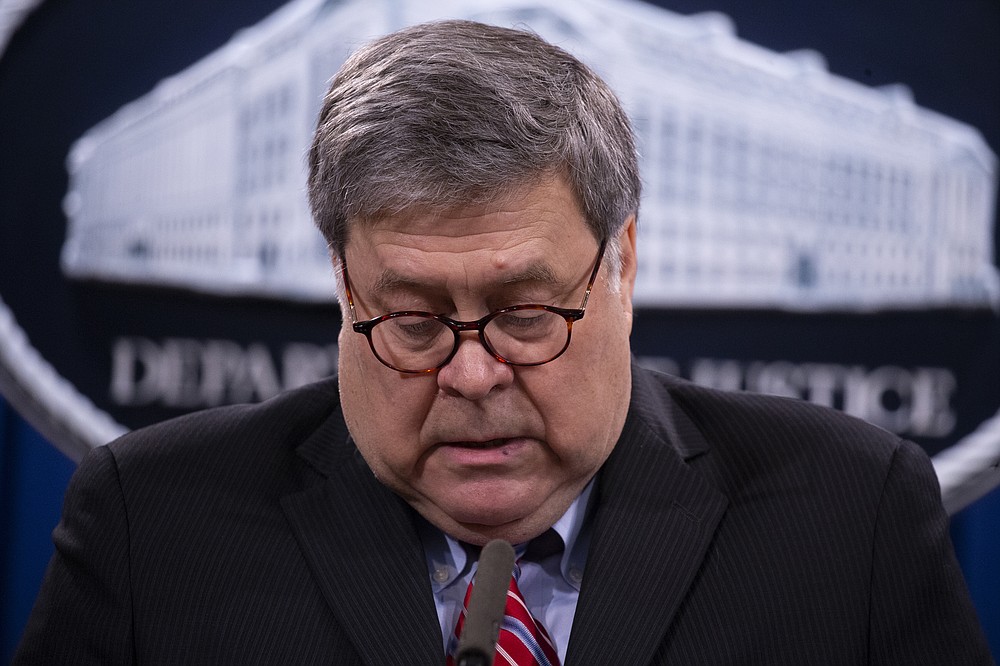