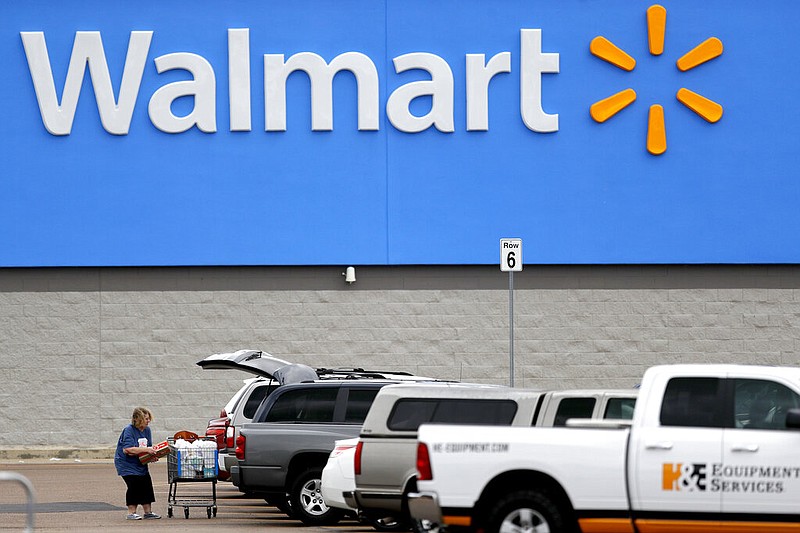 FILE - In this March 31, 2020 file photo, a woman pulls groceries from a cart to her vehicle outside of a Walmart store in Pearl, Miss. Walmart is teaming with the General Motors' Cruise autonomous vehicle unit to test automated package delivery in Arizona. (AP Photo/Julio Cortez, File)

WASHINGTON — The Justice Department sued Walmart on Tuesday, accusing it of fueling the nation’s opioid crisis by pressuring its pharmacies to fill even potentially suspicious prescriptions for the powerful painkillers.

The civil complaint filed Tuesday points to the role Walmart’s pharmacies may have played in the crisis by filling opioid prescriptions and by unlawfully distributing controlled substances to the pharmacies during the height of the opioid crisis. Walmart operates more than 5,000 pharmacies in its stores around the country.

Federal law required Walmart to spot suspicious orders for controlled substances and report those to the Drug Enforcement Administration, but prosecutors charge the company didn’t do that.

“Walmart knew that its distribution centers were using an inadequate system for detecting and reporting suspicious orders,” said Jason Dunn, the U.S. attorney in Colorado. “As a result of this inadequate system, for years Walmart reported virtually no suspicious orders at all. In other words, Walmart’s pharmacies ordered opioids in a way that went essentially unmonitored and unregulated.”

The 160-page suit alleges that Walmart made it difficult for its pharmacists to follow the rules, putting “enormous pressure" on them to fill a high volume of prescriptions as fast as possible, while at the same time denying them the authority to categorically refuse to fill prescriptions issued by prescribers the pharmacists knew were continually issuing invalid invalid prescriptions.

Walmart fought back in an emailed statement to The Associated Press, saying that the Justice Department’s investigation is “tainted by historical ethics violations." It said the “lawsuit invents a legal theory that unlawfully forces pharmacists to come between patients and their doctors, and is riddled with factual inaccuracies and cherry-picked documents taken out of context."

AP reported the news of the lawsuit ahead of the Justice Department's public announcement, citing a person who could not discuss the matter publicly before the announced move. The person spoke to the AP on condition of anonymity.

Walmart filed its own preemptive suit against the Justice Department, Attorney General William Barr and the Drug Enforcement Administration nearly two months ago.

In its lawsuit, Walmart said the Justice Department’s investigation — launched in 2016 — had identified hundreds of doctors who wrote problematic prescriptions that Walmart’s pharmacists should not have filled. But the lawsuit charged that nearly 70% of the doctors still have active registrations with the DEA.

“Blaming pharmacists for not second-guessing the very doctors the Drug Enforcement Administration (DEA) approved to prescribe opioids is a transparent attempt to shift blame from DEA’s well-documented failures in keeping bad doctors from prescribing opioids in the first place,” the company said in its statement.

Walmart’s lawsuit alleged the government was blaming it for the lack of regulatory and enforcement policies to stem the crisis. The company is asking a federal judge to declare that the government's suit has no basis to seek civil damages. That suit remains ongoing.

The initial investigation was the subject of a ProPublica story published in March. ProPublica reported that Joe Brown, then U.S. attorney for the Eastern District of Texas office, spent years pursuing a criminal case against Walmart for its opioid prescription practices, only to have it stymied after the retail giant’s lawyers appealed to senior officials in the Justice Department.

Two months later, Brown resigned. He didn’t give a reason for his departure except to say he would be “pursuing opportunities in the private and public sectors." Brown went into private practice in the Dallas area.