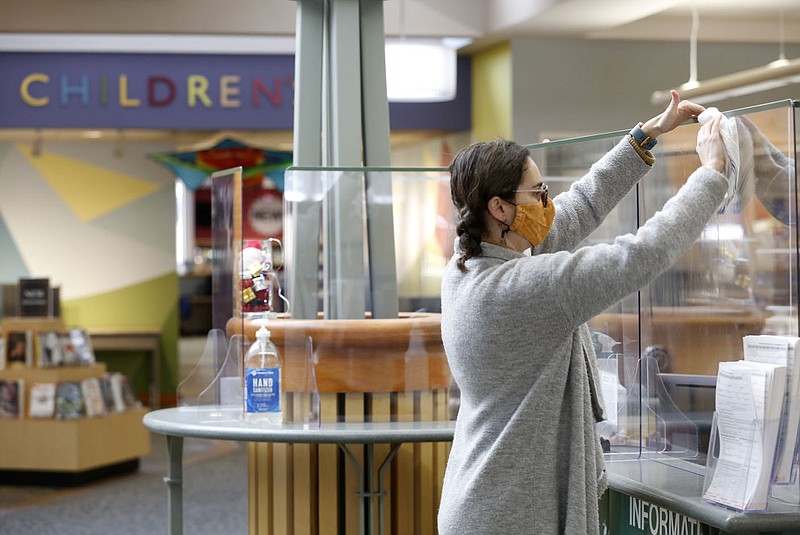 Olivia Harrington, an information assistant at the Springdale Public Library, cleans possible contact areas Wednesday at the library. The library continues curbside pick-up and allows patrons to enter to use some available services and check out materials by appointment only. Check out nwaonline.com/201217Daily/ and nwadg.com/photos for a photo gallery. (NWA Democrat-Gazette/David Gottschalk)

SPRINGDALE -- The Public Library Board backs its director in a dispute with Springdale City Council member Amelia Williams, who has threatened to cut the library budget if more services aren't offered.

The City Council is set to vote Tuesday on the city's 2021 budget, and Williams' demands are likely to be discussed.

"I would like to see the library open at 60% capacity," Williams told the library board last week during its monthly meeting. She said she applied the state capacity rules for restaurants during the covid-19 pandemic to the library.

The library board, in conjunction with the city, oversees the operation of the library, which is in Murphy Park, in the city's center.

The library closed to the public in March. Mayor Doug Sprouse closed all city offices when the first case of covid-19 reached Washington County.

Sprouse said he depends on his department heads to determine when covid-19 conditions will allow for safe openings based on guidelines from the state Department of Health and U.S. Centers for Disease Control and Prevention.

The library is open by appointment for browsing, technology and other services, said Anne Gresham, the library's assistant director. The library offers curbside pickup of books and items copied with the library's technology, she said. Books and audio books always are available to check out through the online catalog. And staff members are re-creating children's story times online and putting together craft kits for children to take home, Gresham said.

Marcia Ransom, library director, said seven family groups -- or roughly 50 people -- are allowed in the library during 45-minute appointments. The staff sanitizes every object in every place visitors went before the next appointments begin, she said

The library counts 61,000 card holders, but members of any of the eight libraries in the Washington County Library System are allowed access to Springdale's resources, Gresham explained.

Williams suggested the library's 2021 city allotment should reflect only the operating costs of the fourth quarter of 2020. The city would take the fourth quarter expenditures and multiply that times four to determine the total 2021 budget.

Williams has also discussed removing 10 open positions that have remained unfilled because of the pandemic. The library employs 19 full-time and seven part-time employees when fully staffed, Gresham said.

Sprouse said the unfilled positions account for the library's roughly $225,000 savings this year. The positions remain in the 2021 budget because the staff will be needed when the library opens fully, he said.

"And we don't know when that's going to happen," he said.

Williams said she would rather see Ransom ask for the money when the jobs need to be filled.

Williams said she thinks the library needs to be fully open to provide resources to families living in poverty.

"I see the schools open, and I think the library should be open," the former teacher said.

The school district and the library have worked together to allow free access to thousands of online resources for students, Ransom said.

But the district does limit home use for elementary students, she said.

Lezley Brinegar, the librarian at Turnbow Elementary, said students tell her they have to wait until their parents come home from work to use their devices.

"I think it's tremendous that the schools are open," Ransom said. "I also think there's tremendous strain on the school staff. I have the utmost respect for them.

"I think, if we'd shut down some other places, we would be more successful at keeping the schools open," she concluded.

Ransom said the board has kept the library access limited to keep library employees and patrons safe.

The Arkansas Department of Health reported Friday 15,559 confirmed cases of covid-19 and 174 deaths in Washington County.

The library closed to appointments for 14 days in November as most of the reference and information staff members were quarantined because of positive covid tests among the staff, Gresham said. Curbside and online resources remained available.

Paula Wilson, president of the library board, noted the discrepancy in numbers reflected in the two-week closing of appointments and Thanksgiving Day when the library was not open.

"Everybody wants to have the library open, but under these circumstances, with covid-19, we can't," Gene Anderson, a member of the library board, said Wednesday. "It's a difficult decision because this is not what a library is supposed to do."

Genevieve Lyons, an English teacher at Springdale High School, has been pleased with the library's limited services. She requested children's books with cultural versions of the Cinderella story for her students. She had the books within 24 hours.

"And the pickup times are great," she said. "It's just like any other online shop."

Lyons said she gets "sucked into" the library building and will spend hours browsing the bookshelves to feed her own reading habit. The online browsing draws her in, too, and she always has at least one of the library's audio books on her tablet.

Lyons said she supports the library's decisions to keep its building closed.

"Every day, Washington County is one of the top three counties in the number of cases. We need to follow the guidelines they've put out for individuals and businesses," she said.

Ransom pointed to Gov. Asa Hutchinson who last week urged Arkansans to stay home instead of traveling to be with family. At the same news conference, he announced the death toll from the virus had reached 3,000 in the state.

Wilson supported Ransom's decision. She said she works for Arvest Bank, which keeps only one lobby in the city open.

"I feel strongly we need to protect the staff and the patrons," she said. "That's what we do where I work, and I feel comfortable that we have minimal exposure."

Leasa (cq) Wood, circulation clerk at the Springdale Public Library, prepares library materials Wednesday for curbside pick-up at the library. The library continues curbside pick-up and allows patrons to enter to use some available services and check out materials by appointment only. Check out nwaonline.com/201217Daily/ and nwadg.com/photos for a photo gallery. (NWA Democrat-Gazette/David Gottschalk) 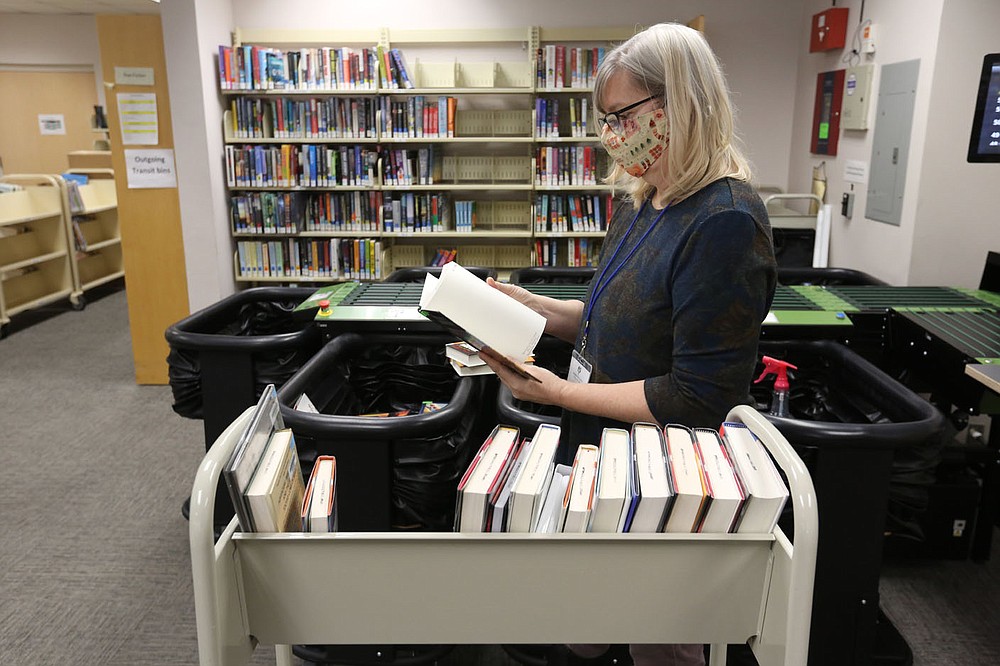 Liz Molesso, circulation clerk at the Springdale Public Library, checks returned materials Wednesday at the library. The library continues curbside pick-up and allows patrons to enter to use some available services and check out materials by appointment only. Check out nwaonline.com/201217Daily/ and nwadg.com/photos for a photo gallery. (NWA Democrat-Gazette/David Gottschalk)
More News

To see a copy of the library’s report, visit: nwaonline.com/librarystats1215/