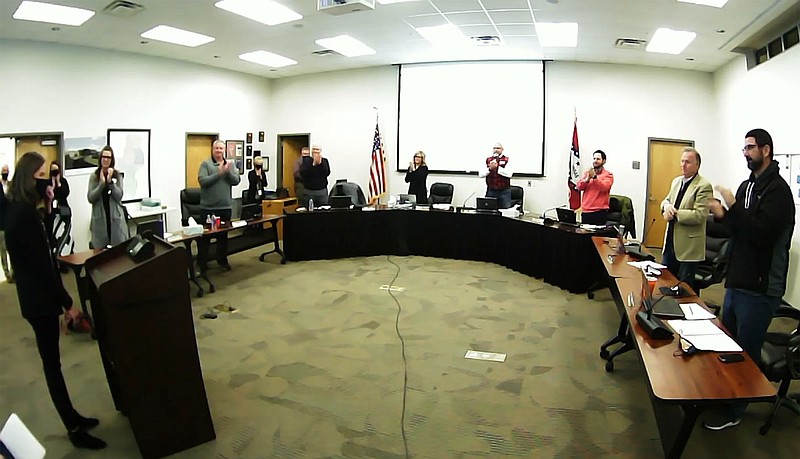 BENTONVILLE -- The School Board, in a series of votes Tuesday, approved pay raises for certain workers that will increase the School District's costs by nearly $500,000 per year.

The biggest impact will come from the board's decision to amend the contract with SSC Service Solutions, which provides custodial services for each of the district's 25 schools.

When the district originally contracted with SSC in 2008, starting pay for its employees was about $3 above minimum wage. The state's minimum wage has increased since then, however, and on Jan. 1 it will increase again to $11 per hour, completely eliminating all difference between what SSC employees make and the minimum wage.

That shrinking difference has made it harder to attract and keep people in those custodial positions, Deputy Superintendent Janet Schwanhausser said.

"And the work ethic that we expect, we're not seeing," she added.

The board accepted Schwanhausser's proposal to increase the lowest rate paid by SSC to $11.50 per hour and increase current employee pay proportionately. That will raise the annual contract cost with SSC from $5.3 million to $5.6 million.

The district solicits bids on its custodial services once every five years. The last time the district bid out the services was in 2018. SSC not only submitted the lowest bid for the contract, but also was the only company that met several requirements the district had in mind, Schwanhausser said.

Also on Tuesday, the board approved pay increases for substitute teachers, largely because an evaluation of the current rates showed the district would not meet the minimum-wage requirement as of Jan. 1.

Pay for long-term substitutes with a bachelor's degree also will increase from $85 to $90 per day. Bentonville defines "long-term" as 10 consecutive days, Sharp said.

The maximum impact of the pay increase for substitutes will be about $200,000 per year, but that's assuming all substitute positions are filled by licensed staff members, which won't be the case, Sharp said.

The Rogers School Board approved the same incentive structure for substitute teachers last month. Schools across the state and nation have seen their substitute pool shrink dramatically this year, largely because of the covid-19 pandemic, Sharp said.

Joe Quinn, a board member, said the pay increases the board approved Tuesday reflect a very competitive job market that continually puts pressure on the district's budget.

The district last sought and received approval for a millage increase in 2017. That increase went toward the costs of building additional schools.

Bentonville's budget for this school year is approximately $190 million.

The state’s minimum wage as of 2018 was $8.50 per hour; Arkansas voters approved increases to take effect Jan. 1 of each year for three years: