A Peek Into The Deep: New aquarium brings sea creatures to Branson 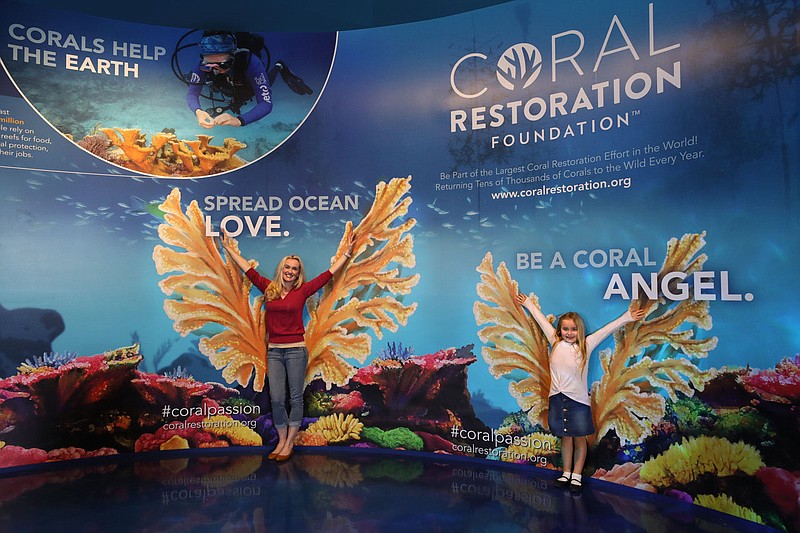 “Unfortunately, nearly all of the corals in the Florida Reef Tract have disappeared in our lifetime,” Bitter says. “I hope that our aquarium will inspire guests to learn more about coral and help the Coral Restoration Foundation restore that area.” (Courtesy Photo)

Steve Bitter sounds a lot like a proud papa -- but he's got more "children" to care for than he can count. Bitter is the director of husbandry at Branson's brand-new Aquarium at the Boardwalk, and he's responsible for more than 7,500 sea creatures, along with 16 aquarists and life support specialists.

It's a passion that was born when Bitter was just a kid himself.

"I grew up in the Arizona desert and visited the California coast when I was about 7 or 8," he remembers. "This started a lifelong fascination with the world underwater."

A job in a pet store's fish department -- "I had a ball watching them, caring for them and talking about them with customers" -- eventually led Bitter to the Marine Aquarium Conference at the National Aquarium in Baltimore. "I was overwhelmed to learn that caring for fish in aquariums was a real profession in an amazing industry," he marvels. "Over the last 15 years, I moved to Tampa and worked at The Florida Aquarium as a senior biologist, then went home to Tempe, Ariz., and worked as the curator at Sea Life. From there, I became part of Sea Life's global development team and opened seven aquariums in the U.S., China, Japan, Malaysia and the United Kingdom.

"Last year, I was fortunate enough to get the opportunity to come and work on this beautiful aquarium project," he says. "My wife, Heidi, and I moved to Branson, and we love the community. It's been a joy to work with Kuvera Partners on building the aquarium, and now that we're open, I'm especially excited that I get to work with the really fantastic husbandry team that we have at this facility."

Being in on the ground floor meant Bitter guided a "complex process" to choose the animals the aquarium would house.

"We began working on it during the early aquarium design process because we wanted to pair 'star species' with themed environments," he explains. "For example, we planned for lobsters, crabs and eels to live in habitats that are part of a shipwreck zone, and we included rays and sharks in the large coral reef touch pool. Many revisions and additions were made along the way, considering the guest experience; the relationships and dynamics among the species; ethical sourcing; and our ability to house them at the highest standards for their entire lives."

Perhaps the biggest challenge was the largest exhibit, the Grand Aquarium, "designed to showcase the diversity and splendor of the tropical oceans."

"With this in mind, we wanted to have as many animal species as possible, but we had to make sure they could all live together in harmony for their entire lives," he relates. "Tropical reef fish often have much more complex social lives than we give them credit for, and they also have dynamics with other species that we had to account for. So, it was a challenge to select fish that wouldn't push each other around for territory, compete for food, or try to eat one another.

"Because I've been fortunate in my career to work closely with so many remarkable species, I was able to use my knowledge of each fish's habits and behaviors to choose animals that fit into the aquatic community we wanted to build," he continues. "In the end, we were able to create this habitat with over 2,000 individuals from nearly 100 species all living together. The Grand Aquarium houses everything from sharks and rays to small damselfish and wrasses. So far, I've been really pleased at how well the animals have settled in together, and I'm looking forward to seeing them continue to thrive."

Bitter explains that some of the animals needed new homes -- among them the blacktip reef sharks, who were born at other aquariums that had run out of room -- and some were sourced in the wild, but "we spent countless hours researching the origin of every single animal to make sure they came to us from sustainable and transparent sources and were handled very carefully along the way." He also got to share one of his own conservation goals in the Observation Station exhibit.

"Since really getting serious about aquariums, I've been in love with corals, and I'm especially delighted by the relationship of corals with other animals," he enthuses. The seven individual windows along one wall in the Observation Station "are meant to be special views into the coral reef ecosystem where guests can see how tiny invertebrates depend on corals. Corals perform what I think is the most important work in the ocean, and I was lucky enough to do some coral reef fieldwork with Coral Restoration Foundation during my time in Florida. Unfortunately, nearly all of the corals in the Florida Reef Tract have disappeared in our lifetime. I hope that our aquarium will inspire guests to learn more about coral and help the Coral Restoration Foundation restore that area."

Visitors to the aquarium can also meet some of the animals up close, and Bitter has worked diligently to make the experience a good one for everyone involved.

"We have two touch experiences, one with rays and sharks, and another with cold water invertebrates like sea anemones and sea stars," he says. "We get the rays and sharks used to light touching in the course of normal care and during feeding times. So, they don't get especially bothered by the touching in the touch pool, as long as guests follow the guidelines we provide. We ask that our guests use a two-finger touch on specific zones of the animals. This not only keeps the guests safe, but also keeps the stimulus consistent for the animals so they don't get startled or perturbed. We think this allows for a really terrific guest experience, as it allows the guests to feel shark skin (rough) and ray skin (smooth and slippery) and to appreciate the unique aspects of each.

"At first glance, the invertebrates are less reactive, but the touch experience is still quite exciting," he adds. "The sea stars are echinoderms, and they have a unique texture unlike anything else. Anemones actually have a light stinging cell on each tentacle -- not dangerous though! -- so they stick to the fingers of anyone who touches them."

One thing Bitter doesn't have to worry about is his sea creatures contracting the coronavirus. It is limited to mammals, "and here at the aquarium we only have coldblooded animals, so the animals in our care are not susceptible to covid-19."

"However," he adds, "we are very conscious of guest safety, and we are taking numerous steps to protect their health, including timed entry, mandatory face coverings, social distancing and constant cleaning. One area we focus on in the animal care department is the operation of the touch exhibits, since there is human-to-animal contact there. Fortunately, our best information is that saltwater is a disinfectant for covid-19, so any worry about the animals spreading the virus between guests doesn't seem to be an actual risk." 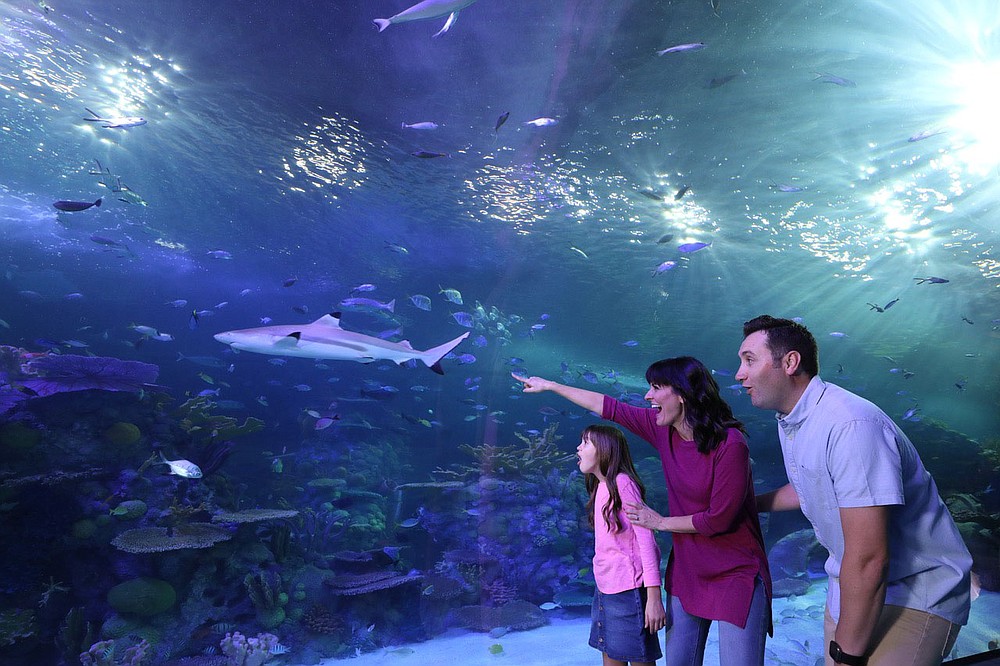 The Grand Aquarium houses everything from sharks and rays to small damselfish and wrasses, Bitter says. (Courtesy Photo) 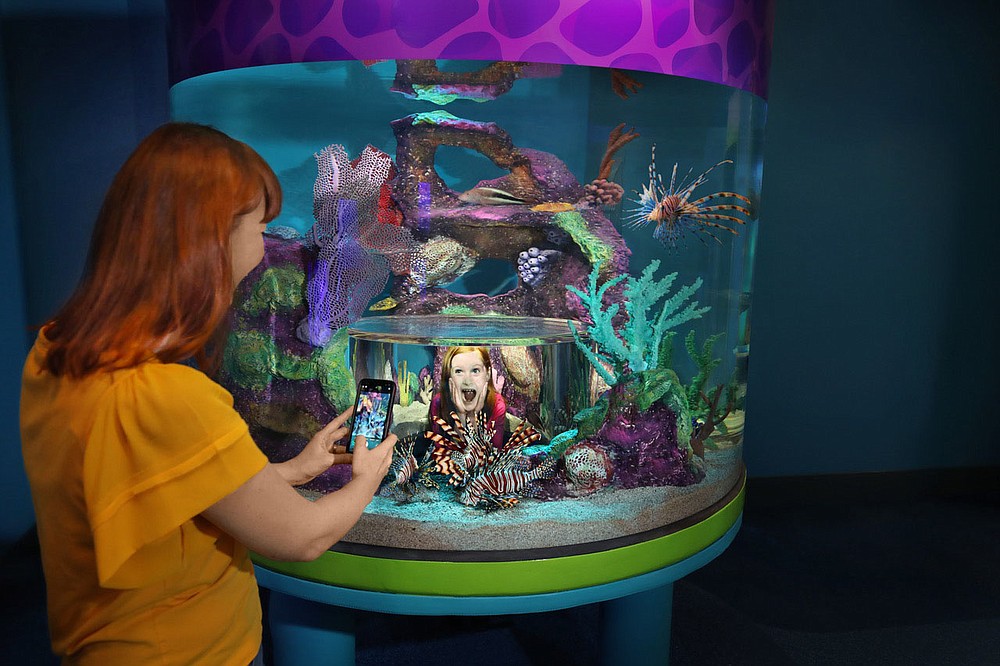 Visitors to Branson’s brand-new Aquarium at the Boardwalk can get into the exhibits in a variety of ways. (Courtesy Photo) 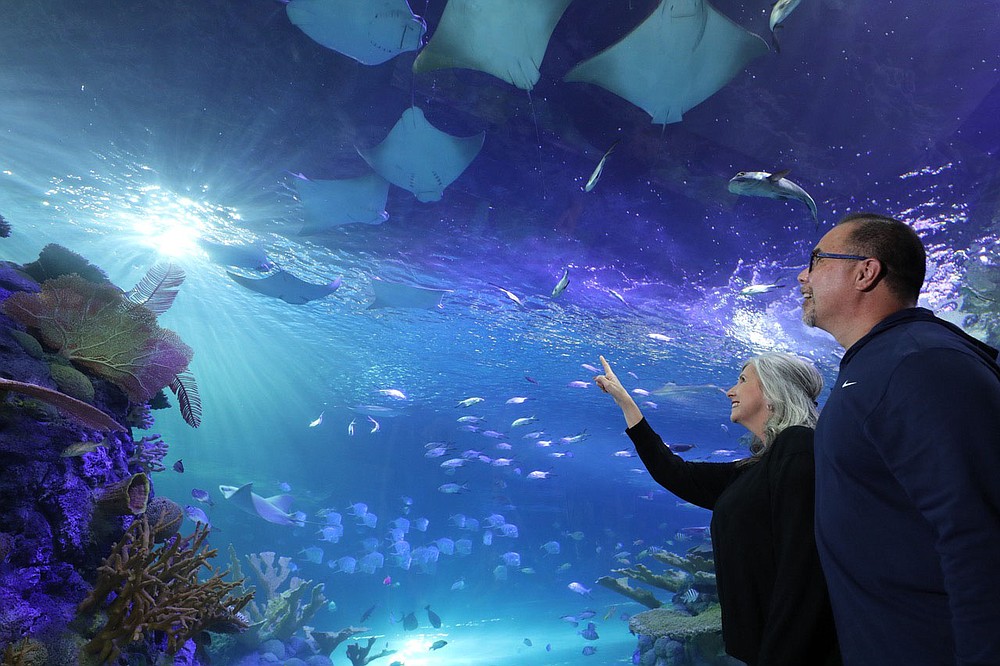 Bitter says some of the animals needed new homes, and some were sourced in the wild, but “we spent countless hours researching the origin of every single animal to make sure they came to us from sustainable and transparent sources and were handled very carefully along the way.” (Courtesy Photo) 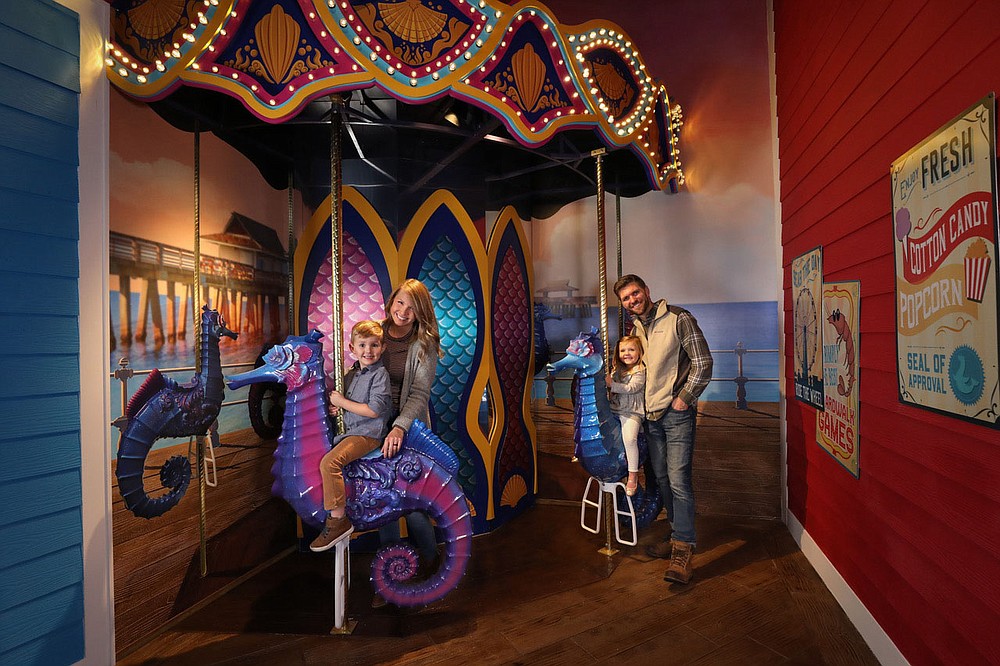 Branson’s brand-new Aquarium at the Boardwalk is intended for kids of all ages. (Courtesy Photo) 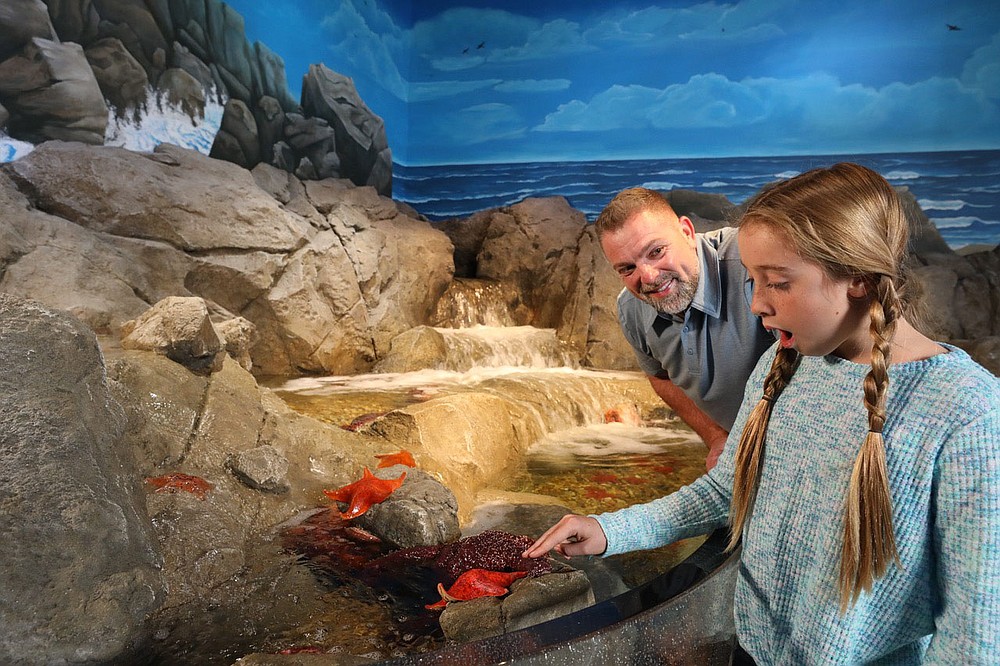 Branson’s brand-new Aquarium at the Boardwalk offers two touch experiences, one with rays and sharks, and another with cold water invertebrates like sea anemones and sea stars. (Courtesy Photo) 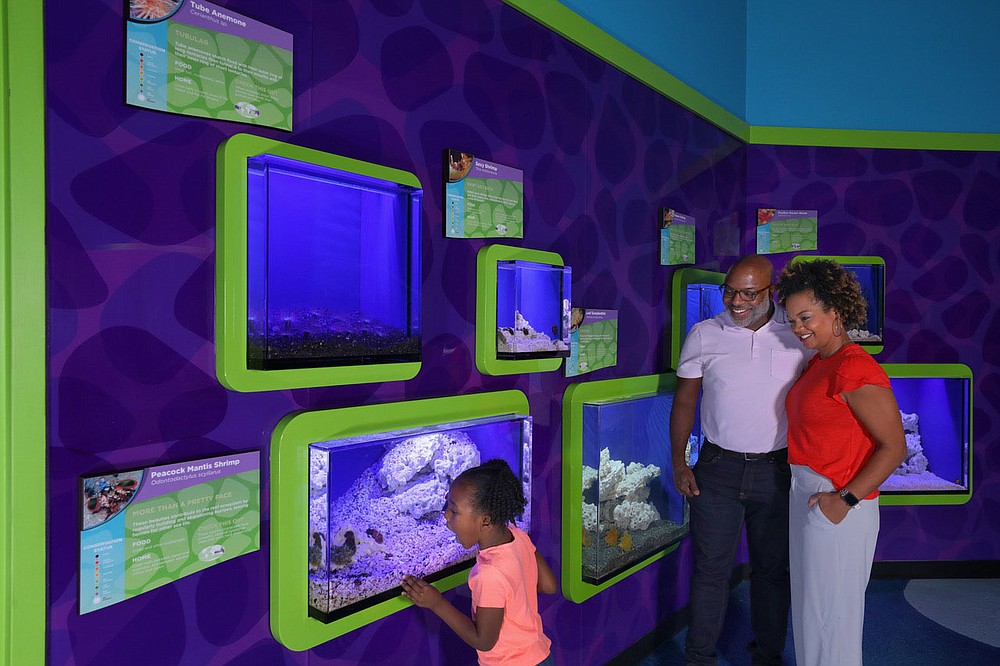 The seven individual windows along one wall in the Observation Station “are meant to be special views into the coral reef ecosystem where guests can see how tiny invertebrates depend on corals,” says Steve Bitter. “Corals perform what I think is the most important work in the ocean.” (Courtesy Photo)
More News

Aquarium at the Boardwalk

WHEN — Hours vary by day; please check the website for the most up-to-date schedule