Lotsa flavor: Latkes are more than a traditional Jewish dish 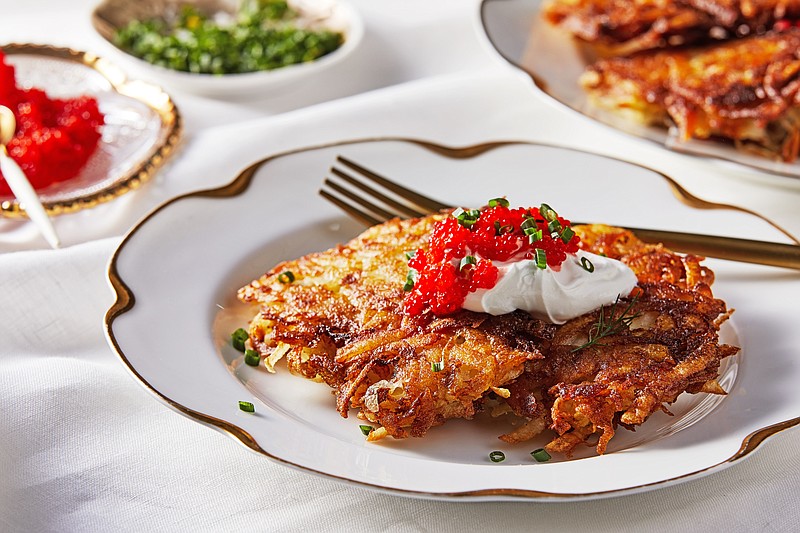 I love latkes so much I named my dog after them.

That's not the punchline to a joke. When we got our Labrador retriever puppy in November 2019, we took one look at her pale yellow coat and named her Latke. And last Hanukkah, we even tried photographing Latke with latkes, but being true to her Labrador self, she ate them before we could snap a single frame.

So, latkes are something I've obsessed over since I was a kid, begging my mom to make them for me year-round. As an adult, I've made all kinds: with potatoes and with other vegetables, coarsely shredded and finely grated, fried and baked, with all manner of seasonings, spins and techniques.

But for me, nothing beats a crispy, lacy classic potato latke with few ingredients.

Latkes are akin to a good pair of jeans: quotidian and humble enough for weeknight dinners, festive and elevated for a dress-up occasion. Making them reminds of the Before Times when I threw latke parties — basically an excuse to eat as many potato pancakes as stomachs would allow, with or without various accoutrements, from simple sour cream and applesauce to decadent caviar. (And, obviously, bubbles to go with it all.)

This year, rather than making mountains of latkes, I'll scale down for our family of three, but I still plan to throw a latke party. Finding joy and merriment where one can is one of 2020's great lessons.

Most classic potato latke fans fall into two camps: those who like dense, finely grated ones shaped like hockey

pucks and those who want coarsely shredded ones with lacy, crispy frilly bits and a bit of a disheveled look about them. I stand firmly in that latter camp.

To me a great latke is a decidedly crispy one, the kind that almost shatters against your teeth with a satisfying crunch. In the center, there's a bit of softer potato as well. Like a great cookie, a great latke needs both — the crispy and the chewy — to be heavenly.

My latke recipe is simple and not unlike many out there: potatoes, a little onion, eggs and flour. I season the mixture with a generous helping of salt (don't be afraid to use a generous hand here — the potatoes can handle it) and a bit of ground black pepper. Then I add my "secret" ingredient, which is potato starch. More starch and less liquid equals a crispier (and thus tastier) latke.

The idea to add extra starch occurred to me one day while patting dry chicken wings, which I was about to coat in cornstarch and then fry until crispy. What if, I thought, I did the same with latkes? Get rid of excess moisture and increase the starch content for crispiness beyond compare.

I never looked back.

While the recipe is elementary and pantry-friendly, it's important to start with the right kind of potato. Russets, packed with starch and relatively low in moisture, are ideal.

Once they're shredded, it is important to drain the potatoes of as much water as possible — more liquid means a mushier latke. I like to wrap my grated potatoes in a cheesecloth bundle and then twist, twist, twist and squeeze, squeeze, squeeze. I drain that excess liquid into a bowl, which I let sit for a bit while I mix in the other ingredients. Once the starch in the drained liquid settles on the bottom, I carefully pour off the liquid and scrape the thick, chalklike layer of starch into the potato mixture. To answer the siren-call of promised crunch, I add an additional tablespoon of potato starch (though cornstarch will do in a pinch) to the mixture.

This Hanukkah, we will skip the decadent accoutrements, as they feel wrong against the backdrop of such a difficult year. We'll forgo the caviar and the bubbles, and instead keep it simple, with plenty of sour cream and applesauce.

And as we light the menorah candles, we will wish for more light and joy in the forthcoming year, looking forward to the time when we can see our loved ones and hug one another.

Position a rack in the middle of the oven and heat to 200 degrees. Place a wire rack inside a large, rimmed baking sheet.

Using a food processor fitted with coarse grating attachment, or the large holes of a box grater, grate the potatoes. Transfer to a large piece of folded cheesecloth set in a medium bowl. Twist into a bundle and gently but firmly squeeze out excess liquid into the bowl. (You may need to do this in batches.)

Empty the potatoes into a large bowl. Let the liquid sit undisturbed while you prepare the latke mixture.

Place a large, heavy skillet, preferably cast-iron, over medium heat and warm while you mix the latke mixture.

Add enough oil to come ¼ inch up the sides of the skillet and gently swirl the oil around — when the oil gently ripples across the surface, it is hot enough for frying.

Working in batches, spoon between ¼ and 1/3 cup potato mixture per latke into the skillet; you should be able to fit 4 to 5 latkes at a time. Fry the latkes until golden brown on the bottom, 2 to 3 minutes per side, then, using a thin metal spatula, gently flip the latkes. (Your first batch might take up to 4 minutes per side, but as the pan gets hotter, the subsequent batches will go faster. When you see the frilly ends of the latke turn golden brown, it's time to flip.)

Transfer the latkes to the prepared baking sheet; place the sheet in the oven to keep the latkes warm. Repeat with the remaining potato mixture, adding more oil as needed; you may need to adjust the heat with subsequent batches if the latkes start to brown too quickly. As the potato mixture sits, liquid may pool at the bottom of the bowl; be sure to scoop the mixture, draining away any water before adding to the skillet.

Transfer the latkes to a large platter and serve warm, with your choice of accompaniments, such as applesauce, sour cream, lox, salmon roe and/or dill and chives, if desired.