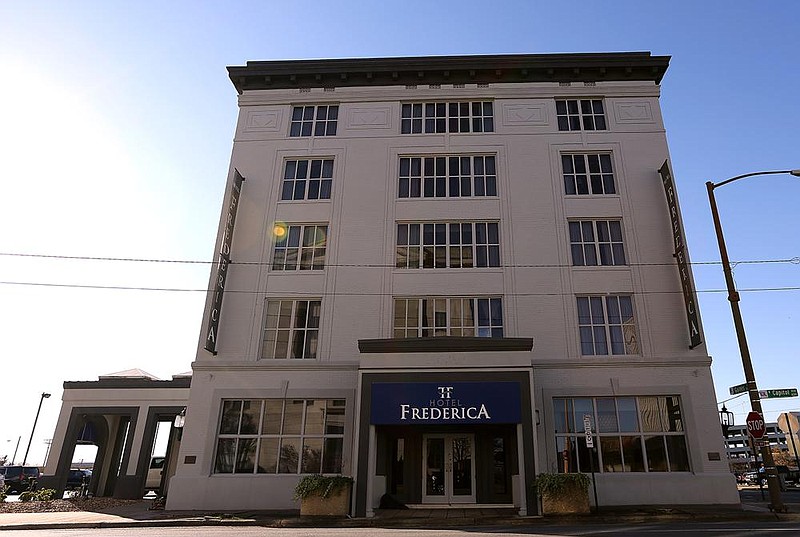 The winning bidder for the shuttered Hotel Frederica in downtown Little Rock said it intends to reopen the troubled historic property as soon as next summer, perhaps under a new name.

Before that happens, extensive damage from vandalism must be repaired and a design review undertaken to determine what hotel brand might best fit the 82-room property at 625 W. Capitol Ave., according to Parth Patel, president for development at VIPA Hospitality Management.

VIPA Hospitality Management owns six hotels in Hot Springs, including the Home2 Suites by Hilton on Lake Hamilton that opened two years ago. The company got its start in the business with hotels in the Chicago area.

A limited liability company called Hotel Le Rock and affiliated with VIPA paid $1.68 million for the 82-room hotel at auction in late September.

"It's a beautiful historic hotel with a wonderful location in downtown Little Rock," Patel said Tuesday.

For now, VIPA has installed more fencing and solar-powered flood lights while it waits for Entergy to restore power to the six-story property. The vandalism stopped, according to court documents, after the receiver this summer hired a security service to check on the property three times a day at a cost of about $1,100 a week.

The previous owner, SHG Management of Sherwood, lost possession of the hotel last fall, after a $4.8 million foreclosure lawsuit filed in October by ReadyCap Lending LLC of New Providence, N.J.

SHG borrowed $4.6 million in 2016 from Ready-Cap -- a loan backed by the Small Business Administration -- to buy the hotel for $2.85 million. SHG principals also said they spent $2 million in transforming the 82-room hotel into a "boutique" property. The $4.8 million foreclosure lawsuit includes penalties and interest.

The state Department of Finance and Administration closed the hotel last September for nonpayment of about $60,000 in sales taxes. SHG also owed more than $52,000 in property taxes and real estate taxes in Pulaski County and more than $12,000 to the Little Rock Advertising and Promotion Commission, according to court filings.

Under the terms of the auction, the sale had to close with 30 days, but Parth said closing was delayed, in part, because of the liens against the property.

Newmark Moses Tucker Partners, which represented the seller at auction, said in a Facebook post on Friday that under the new ownership, the hotel is "undergoing a multi-million hotel redevelopment and is scheduled for opening summer in 2021."

VIPA will be retaining a consultant with expertise in historical properties to ensure whatever improvements are made protect the historical aspects of the property, Patel said.

SHG marketed the hotel as a boutique hotel, but Patel said he believes the hotel would have more success under a name brand, many of which have boutique-like sub-brands.

Operating under a brand allows the hotel to take advantage of brand loyalty programs with a ready-made customer base.

"We are going to be exploring all of our options, but I think whatever the end result might be, whether it's boutique hotel or a branded hotel, it will be something that the city will be proud of," Patel said.