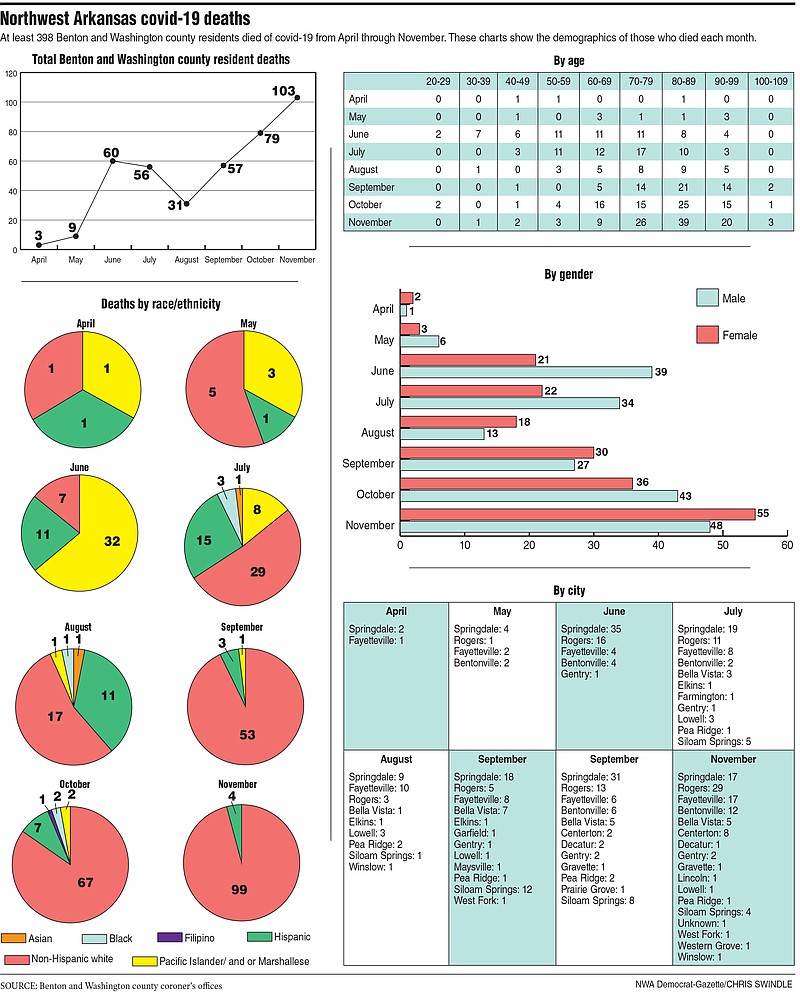 Northwest Arkansas is seeing a surge of covid-19 deaths, surpassing 100 in a single month for the first time in November, according to data from the Benton and Washington county coroners.

Records show 398 Benton and Washington county residents died in the two-county area of covid-19 from April 21 through November, including 103 in November, according to coroners' records. The region saw its first deaths in the spring with three in late April and nine in May.

The data doesn't yet include all Benton and Washington county residents who died outside the region, nor does it include people who lived in other counties or out of state and died in Northwest Arkansas.

Danyelle McNeill, spokeswoman at the Arkansas Department of Health, said 109 residents of the two counties have died in nursing homes. That's about 27% of the region's cumulative covid-19 deaths. One nursing home staff member in Benton County also died of the virus.

Marshallese or Pacific Islanders were overrepresented in the covid-19 death toll early in the pandemic, accounting for more than 50% of the June deaths despite making up less than 3% of the region's population. Those numbers dropped to two deaths in October and none in November.

A total of 48 Northwest Arkansas residents who were Marshallese or Pacific Islander have died of the virus, accounting for about 12% of the region's deaths.

Health care professionals and community leaders attributed the virus' disproportionate effects on the Marshallese to a number of factors, including higher rates of underlying health conditions such as diabetes, working in poultry plants, language barriers and large gatherings.

Census estimates show Hispanics make up about 17% of the region's population. Hispanic residents accounted for about 13% of the cumulative death toll with 56 deaths. They, too, were overrepresented earlier in the pandemic, accounting for 15, or 26%, of July's 56 deaths and 11, or 35%, of August's 31 deaths.

A summary of the federal Centers for Disease Control and Prevention's findings from mid-March to mid-June on covid-19 in the region's Hispanic and Marshallese communities noted a need for increased understanding and awareness about prevention, testing, isolation and treatment of the virus.

"Such assistance, paired with a strong coordination of stakeholders, should encourage community acceptance and adoption of prevention and mitigation methods and include opportunities for community feedback to ensure that messaging and services are reaching target populations," the report says.

Eldon Alik, consul general for the Springdale consulate of the Republic of the Marshall Islands, said a Marshallese covid-19 task force was created and has worked with the University of Arkansas for Medical Sciences Northwest Regional Campus and the state Health Department to educate the Marshallese community on how to prevent the spread of the virus.

The task force regularly meets with Marshallese church leaders on how to educate their congregations on the virus, translates information from the CDC into Marshallese language, communicates with the community via radio and social media and has given away masks and cleaning supplies.

He also attributed the decrease to the work of contact tracers from the university who identified where cases were coming from in the Marshallese community.

"It's a lot of collaboration of community," he said.

Alik, however, expressed concern about the holiday season as family gatherings at Christmas are important in the Marshallese community.

"I hope it's not the calm before the storm," he said.

The task force is urging the community not to gather with people they don't live with for the holidays, he said.

Of the eight remaining deaths, six were Black, two were Asian and one was Filipino.

Males are slightly overrepresented in the cumulative death toll. Of the region's deaths, 187, or about 47%, were female, while 211, or about 53%, were male. Males and females each make up 50% of the region's population, according to the Census Bureau.

Nationally, some areas are running low on morgue space as covid-19 deaths rise.

"We have not had any storage issues and have not come close to being at capacity," he said.

He estimated funeral homes in Benton County have space for 50 to 75 bodies and said hospitals also have space.

"Hospitals typically have limited holding facilities because the need is generally low. Like everything during the pandemic, we watch all areas of operations and are adjusting as necessary," according to a statement from Northwest Health, which has medical centers in Springdale and Bentonville.

Washington Regional Medical Center in Fayetteville has a morgue on site with adequate space for coronavirus and noncoronavirus corpses, according to Natalie Hardin, spokeswoman for the hospital.

"If capacity were to become an issue, we would work with the coroner and funeral homes to obtain more space," she said.

Likewise, Mercy Hospital Northwest Arkansas spokeswoman Jennifer Cook wrote in an email: "Mercy's surge plans have provisions for all elements of patient care related to covid-19, including ensuring dignity to those who pass away in our hospitals. While there is increased need during the pandemic, Mercy is well-prepared to appropriately and reverently care for the deceased and support families in their time of loss."

The Benton County morgue, which has space for nine bodies, is generally used only for circumstances such as homicides, car accidents or bodies of those whose families cannot be found, Oxford said. Most bodies are kept at morgues at hospitals or funeral homes.

Washington County Coroner Roger Morris and his deputies pick up all residents who die from covid-19 and hold the bodies for funeral homes. Morris has said he instituted the practice as a way to protect funeral home workers and relatives of the deceased from infection. The county installed an addition that can hold eight bodies of covid-19 victims to the morgue and borrowed a refrigerated trailer from the state that can hold 17 bodies to prepare for more deaths.

Oxford isn't bringing the bodies of people who have died of covid-19 back to the county morgue.

The Arkansas State Board of Embalmers and Funeral Directors' website shows 31 funeral homes and crematoria in Benton and Washington counties.

Arkansas Democrat-Gazette reporter Andy Davis contributed to this report. Alex Golden can be reached by email at [email protected]