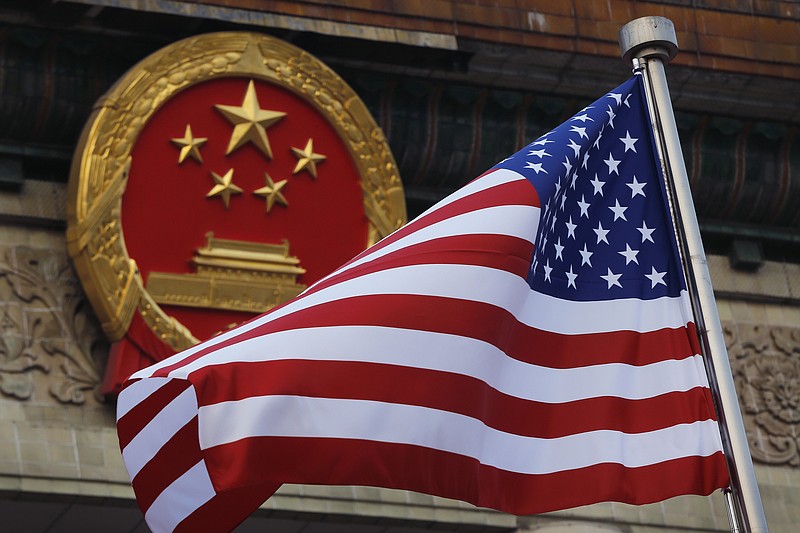 FILE - In this Nov. 9, 2017, file photo, an American flag is flown next to the Chinese national emblem during a welcome ceremony for visiting U.S. President Donald Trump outside the Great Hall of the People in Beijing. U.S. and Chinese trade envoys discussed strengthening coordination of their government’s economic policies during a phone meeting, the Ministry of Commerce announced. (AP Photo/Andy Wong, File)

BEIJING -- The U.S. government has stepped up a feud with Beijing over security by adding China's biggest maker of processor chips and a state-owned oil giant to a blacklist that limits access to American technology and investment.

The Pentagon added four companies including Semiconductor Manufacturing International Corp. and China National Offshore Oil Corp. to a list of entities deemed to be part of efforts to modernize the ruling Communist Party's military wing, the People's Liberation Army. That raises the total number of companies on the blacklist to 35.

The Pentagon said in a statement that it is "determined to highlight and counter the People's Republic of China's Military-Civil Fusion development strategy, which supports the modernization goals of the People's Liberation Army by ensuring its access to advanced technologies and expertise acquired and developed by even those [Chinese] companies, universities, and research programs that appear to be civilian entities."

"The actions of the U.S. side seriously violate the principle of market competition and the rules of international trade and economy that the U.S. side has always advocated," said a ministry spokeswoman, Hua Chunying. "The U.S. side should stop abusing state power or generalizing the concept of national security to suppress foreign enterprises."

Semiconductor Manufacturing International plays a leading role in the ruling party's effort to reduce reliance on U.S. and other foreign technology by creating Chinese suppliers of processor chips and other components.

That has taken on greater urgency after Washington blocked access to American chips and other technology for telecom equipment giant Huawei Technologies Ltd. and imposed curbs on other Chinese buyers. The White House also has blocked the use of U.S. technology by global vendors to produce chips for Huawei.

Political analysts expect little change in policy under Biden because of widespread frustration with China's trade and human-rights records and accusations of spying and technology theft.

The 2.3 million-member People's Liberation Army is one of the world's biggest and best-armed militaries. It is spending heavily to develop nuclear submarines, stealth fighters, ballistic missiles and other advanced weapons.

The Pentagon's first list of 20 companies deemed to be military-linked in June included Huawei and video surveillance provider HikVision Digital Technology Co. Both say they never have taken part in military-related research.

The list of companies said to be affiliated with the People's Liberation Army was mandated under the Defense Authorization Act of 1999, but no administration ever put out the required report. Trump has the authority under the International Emergency Economic Powers Act of 1977 to impose financial sanctions against those companies.

Information for this article was contributed by Joe McDonald of The Associated Press and by Tony Capaccio of Bloomberg News.