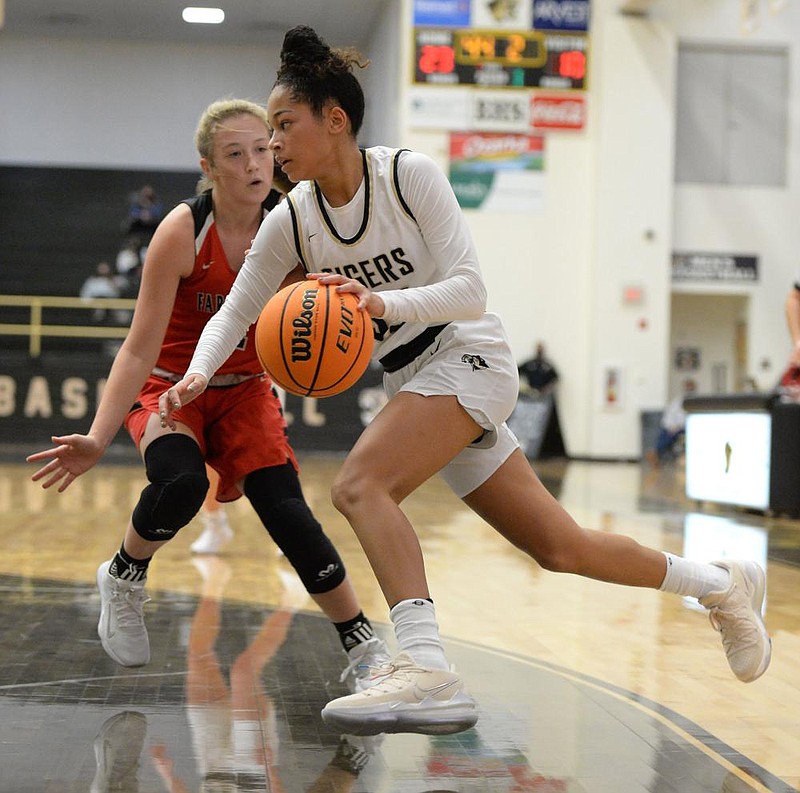 BENTONVILLE -- The points and victories are piling up for the Bentonville girls.

Jada Brown had 22 points and Baylor signee Maryam Dauda added 21 as the Lady Tigers rolled to an 84-51 victory over Farmington in a battle of defending state co-champions in Tiger Arena.

"We have a lot of good shooters, and they can score in a lot of different ways," Bentonville Coach Tom Halbmaier said. "We were fortunate we were hitting shots. Overall our team play -- sharing the ball, passing the ball -- our girls are very unselfish in terms of whoever is hot, that's the girl they are going to feed."

Bentonville (2-0) took control of the game with a 17-2 run, and most of that damage was done via three-pointers. Farmington (5-1) took a 6-4 lead on a Megan Hernandez putback off a missed free throw, but it was erased nine seconds later when Riley Hayes nailed the Lady Tigers' first three-pointer with 5:57 left in the first quarter.

Brown, who orally committed to Rice before the season started, scored half of her points in the first quarter. The junior guard buried a 3 three-pointers, then finished the run with two free throws as Bentonville held a 21-8 cushion.

"We got into a run there and found some rhythm," Halbmaier said. "Like I said, these girls work hard at that, and it's really working for them."

"In the second half, our kids really fought and tried to get themselves back into the game," Farmington Coach Brad Johnson said. "That moment could be over, especially if you haven't been in that position before.

"We were curious to see what the second half would be like. What the kids did, which I expected, was just to go out there and play fearless, play together and not lose their composure. Our kids did that in the third quarter."

Hayes finished with 14 for Bentonville, which hadn't played since Nov. 21 at Mountain Home and extended its winning streak to 24 games dating to last year.

Johnson chipped in 10 points for Farmington.

Jaylen Lee had 15 points to lead five Bentonville players in double figures as the Tigers celebrated their first home game with a blowout over Farmington.

Bentonville (2-0) outscored Farmington 23-13 in the second quarter, extending a four-point lead into a 37-23 halftime cushion. The Tigers led 54-33 after three quarters.

Hayden Shanks scored 14 for the Tigers, Tate King added 11, and Caden Miller and Harrison Hicks chipped in 10 apiece. Layne Taylor led Farmington with 13, while Logan Burch was next with 12.