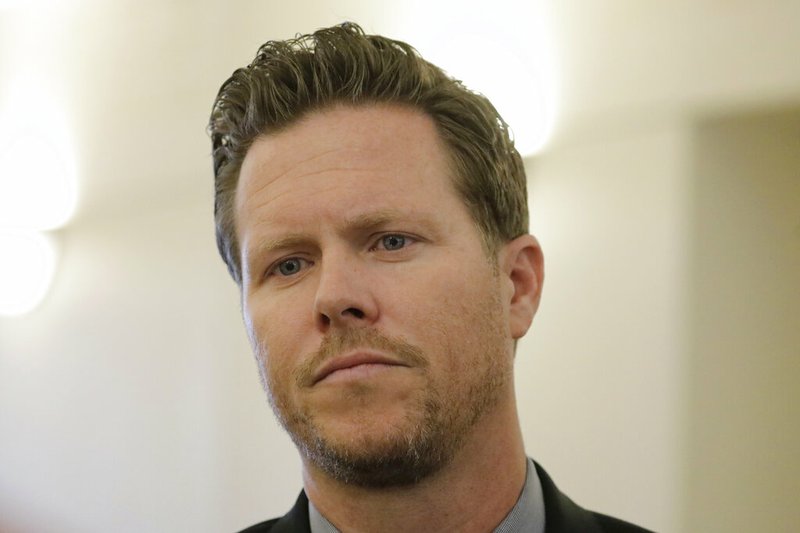 FAYETTEVILLE -- Adoption attorney Paul Petersen on Tuesday was sentenced in federal court for running a human trafficking ring in which he paid pregnant women from the Marshall Islands to come to the United States and give up their babies for adoption.

Petersen, of Mesa, Ariz., received a prison sentence of six years and two months. He was federally indicted in October 2019, accused of running the baby-selling operation in three states: Arkansas, Arizona and Utah.

The former Maricopa County, Ariz., assessor pleaded guilty in June to charges in all three states, facing state charges in Arizona and Utah and a federal indictment in Arkansas, where his law firm maintained a Fayetteville office.

"I tried to make happy families, and I ruined my own," Petersen said Tuesday in his presentencing remarks to the judge. The sentencing took place by video link with Petersen in Arizona because of the covid-19 pandemic.

Petersen ran a "get-rich-quick scheme under the shiny veneer of a humanitarian operation," U.S. Attorney Clay Fowlkes said at the hearing. Petersen charged $10,000 up front per adoption plus expenses and another $25,000 upon completion, according to court documents. Investigators estimated he handled a minimum of 30 Marshallese adoptions a year in Northwest Arkansas.

Petersen maintained Tuesday that he thought he acted within the law and only realized he didn't after his indictment forced him to consider his case.

"No. No. Mr. Petersen, you knew every single time you had these women come in and lie," U.S. District Judge Timothy Brooks replied.

Petersen prepared instruction sheets telling birth mothers what to say when they lied to immigration officials and state court judges, Brooks said. This went on for more than 10 years, through 2017 and into 2018, the judge said.

Petersen's indictment left 19 birth mothers and the prospective adoptive parents in legal limbo. Those cases were dealt with in Washington County Circuit Court under sealed records.

"It's like you rationalized your actions so long, you can't quite give it up," Brooks said.

Petersen kept as many as 12 pregnant women at a time in a single-family home in Springdale as part of his adoption practice, according to court documents. As many as 10 at a time lived at another home in De Queen, according to statements made at Petersen's plea hearing.

News reports in Arizona at the time of Petersen's arrest quoted law enforcement officials saying they found nine women in a house in that state.

Petersen pleaded guilty in Utah state court to three counts of human smuggling and one count of communications fraud, all felonies. He pleaded guilty to state charges of Medicaid fraud in Arizona on June 18 for signing up Marshallese birth mothers for prenatal care and for delivery when such benefits are reserved for permanent Arizona residents. The charges in Arizona said some of the birth mothers stayed in that state for four months.

The women taken to Utah to give birth received little or no prenatal care, prosecutors said in court documents. Their passports also were taken while they were in the U.S. in a step to assert control over them, authorities said.

The case is a groundbreaking, Fowlkes said in a post-sentencing news conference, as pursuing it showed how to prosecute cases like this in the future. The Republic of the Marshall Islands tried for years to stem the flow of impoverished mothers-to-be to the United States to sell their children at birth, he said. Now the U.S. Justice Department knows how to investigate and prosecute such cases, he said.

Pursuing such cases is difficult because Marshallese are free to travel to the U.S. under a treaty, except for purposes of adoption. Proving adoption as the intent is difficult in individual cases, but going after attorneys who arrange these adoptions as an ongoing operation worked, he said.

The government considers both the birth mothers and the adoptive parents in these cases as victims, Fowlkes said. Focusing on the lawyer running such a scheme is both just and simpler, he said.

"Can you think of anyone more susceptible to being exploited than someone desperate to have a child?" Fowlkes said at the news conference. Likewise, pregnant women who are impoverished are easily manipulated, he said.

Melisa Lelan, founder of the Arkansas Coalition of Marshallese, said that while she is pleased the judge imposed a sentence tougher than the sentencing guidelines, that will not deter other bad actors for long, if at all. There is too much money to be had, she said.

But the success at making a criminal case is promising, she said.

"The federal prosecutors are getting smarter at this as they go," Lelan said.

The government sought a 10-year sentence for the one count of conspiracy Petersen pleaded guilty to from his 19-count indictment. The 10-year sentence is the maximum allowed under the law, Fowlkes said.

Federal sentencing guidelines consider factors such as Petersen's lack of a criminal history. The guidelines indicated a maximum recommended sentence of three years, 10 months in Petersen's case, he said.

The 10-year sentence sought by the government would be harsher than sentences given for the same crime to smugglers of migrants who are locked in tractor-trailers in the 125-degree desert heat, defense attorney Kurt Altman of Tucson, Ariz., told the judge.

"I'm from Arizona, so I know about such cases," he said.

Altman argued for a sentence at the low end of the sentencing guideline, which had a minimum of three years.

"The guideline range is too low," Brooks said from the bench before pronouncing the sentence. Petersen's roles as an attorney and as an elected official put him in a position of both public trust and being a sworn upholder of the law, Brooks said.

Petersen pleaded guilty to defrauding Arizona of Medicaid to pay medical expenses for the birth mothers there, claiming they were entitled to those benefits as permanent residents of the state, Brooks noted. Petersen resigned as assessor in January.

"While you were serving the public, you were ripping them off," the judge told Petersen.

Brooks said he had never seen the sheer number or sincerity of heartfelt letters from friends and relations pleading for light sentencing than he received on Petersen's behalf. One friend who testified Tuesday paid the defendant's $500,000 cash bond after his arrest. Another witness was his ex-wife, Raquel, who said the indictment had cost her "my best friend."

"They have never met the other Paul Petersen," he said.

Fowlkes told the court the Petersen investigation resulted from a telephone call from Washington County Circuit Judge Doug Martin to the FBI in 2015. Martin had publicly questioned the number of Marshallese adoptions showing up in his court that year. As many as nine of 10 adoptions granted in Northwest Arkansas involved a Marshallese birth mother by 2018, according to Martin.

Northwest Arkansas has the largest concentration of Marshallese in the United States other than Hawaii, according to the U.S. Census Bureau.

Petersen opened a branch of his law firm in Fayetteville in 2014, according to court records.

Petersen is set for sentencing on state charges in Utah on Jan. 20 and in Arizona on Jan. 22. Brooks allowed Petersen to remain free on bond in the federal case until Jan. 21.