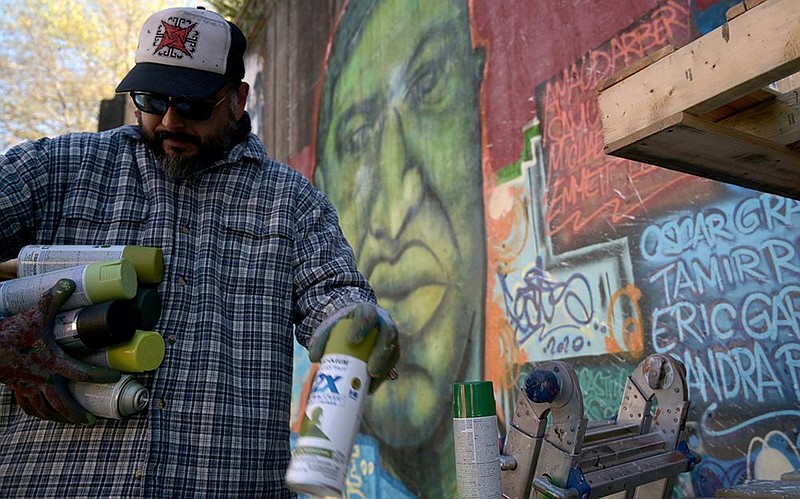 Jose Hernandez packs up his paints at the 7th Street mural on Monday, Nov. 30, 2020 after repairing a part of the mural that was defaced by white paint over the weekend. The faces of George Floyd and Martin Luther King, Jr. were splattered with white paint some time on Saturday. (Arkansas Democrat-Gazette/Stephen Swofford) - Photo by Stephen Swofford

The Seventh Street civil-rights murals in Little Rock have been defaced multiple times this year and local artists are working together with the community to prevent it from happening again.

The concrete walls located underneath two railway bridges over Little Rock's Seventh Street have become a center of artistic activity this year.

The area garnered national attention earlier this year when artists Jose Hernandez and Jermaine Gibson painted the image of George Floyd, an unarmed black man who died in the custody of Minneapolis police on May 25 and whose death has sparked demonstrations around the world.

The colorful mural, a large portrait of Floyd in green and blue with an orange outline, was found on Sunday morning to have been vandalized with white paint, Gibson, who signs his work as EATS, told the Arkansas Democrat-Gazette on Monday.

"All of the artists, we have a group message and someone sent a picture to an artist and it was put into our group text," Gipson said. "I went down there and found balloons filled up with paint, and there were about 10 hits of paint on Floyd's face and Martin Luther King's face, but none of the other murals were defaced. There were also a bunch of non-splattered paintballs out there. They went out there with an arsenal, so it was calculated."

Murals aren't new to the space; they've been there since 2015 and a new one is added each year for Peace Week. The vandalism isn't new either.

Gibson said he was frustrated and angry, but he has also gotten used to the idea of the mural being defaced.

"This is the 10th time they have done this since we started painting down there in 2016," he said. "It has become prevalent since George Floyd, but, between 20-plus artists, we have enough paint to fix immediately. We will always have more paint than them."

Little Rock Police Department spokesman Mark Edwards said they were not aware of vandalism occurring at the Seventh Street mural location because nobody filed a police report.

Gibson said none of the artists have filed a police report because the area belongs to Union Pacific, which gave them permission to use the walls as a canvas for their murals.

"The police really can't do anything unless they catch them in the act," he said. "The problem is the area is an art corridor so it's hard to tell who is there to paint and who is there to deface it."

Gibson said he believes the acts of vandalism are definitely racially motivated and the artists are ready to find ways to prevent this from happening again.

"We are ready to take 'hi-tech' measures to secure the area," he said. "We are also scheduling patrols, where local community members will drive by and make sure everything is all right... Between the community, the neighborhood and the artists, we are all fed up and we are going to make it hard for someone to do this again."

Gibson said having to fix the wall once every two to three months is frustrating, but it means the mural is doing the intended job.

"I mean, it sucks, but, like I said, I am kind of used to it," he said. "If the wall is infuriating somebody this much, then it's doing its job."

Despite the recent acts of vandalism Gibson said he wanted to encourage people from around the state to come see the artwork at Seventh Street.

"It's a safe space to see artwork beyond belief," he said. "I have always loved people that can go there at anytime and shoot photos, do wedding photos or just admire the area. The goal has always been to create a peaceful and calm area within the city and I believe we have done that."