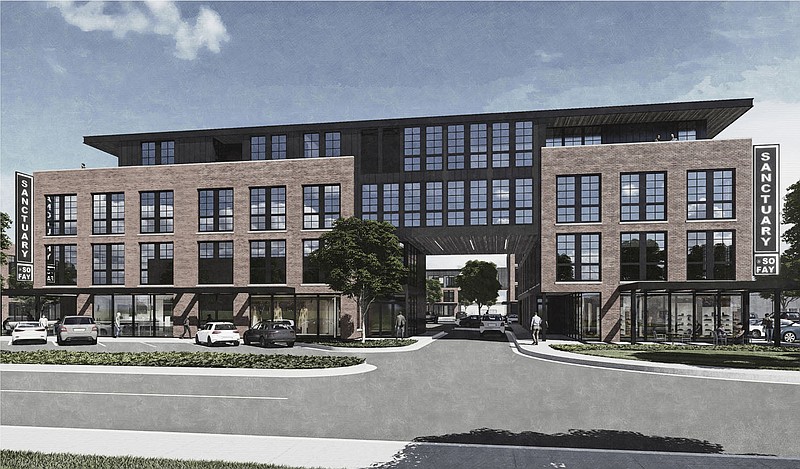 A rendering shows the view from 15th Street of the planned Sanctuary at SoFay mixed-use development in south Fayetteville. The City Council on Tuesday will consider a rezoning request for the project. (Courtesy Photo/ELONG Architecture+Planning)

FAYETTEVILLE -- The developers behind the planned Sanctuary at SoFay hope to create a place for residents to live, work and play that's well-connected to the city's trail system.

The City Council on Tuesday will consider rezoning the vacant land to enable the development to happen.

It's zoned now for multifamily up to 24 units an acre. The requested zoning is for community services, allowing a variety of residential and commercial uses.

Sanctuary at SoFay is proposed as a 32,000-square-foot building with 24 residential units, ranging from studio apartments to one- and two-bedroom units. There would be room for offices, along with retail or restaurants on the ground floor, with four floors total.

Development partners Andy Davis, Garrison Roddey and Eric Greer are behind the project and bought the land for $900,000 in December, according to Washington County property records. The property is between the Arkansas Research and Technology Park to the south and the University of Arkansas' Windgate Art and Design District to the north.

Architect Eric Long said the goal is to build an urban center serving everyone who lives in the area, not just the residents of Sanctuary at SoFay. The building would face 15th Street, with more development possible at the southern part of the property, he said.

"We're trying to get this rezoned to where this development can bring a core to south Fayetteville," Long said. "By that I mean bringing services and goods and places for people to be and be within."

The developers also hope to build trails connecting to the city's larger network. A potential plan would have the developers build a bridge across Town Branch, the stream that crosses the property going east-west. The bridge would connect to the Town Branch trail to the south.

Matt Mihalevich, the city's trails coordinator, said building a bridge across Town Branch could prove difficult. It's a significant stream and would likely require a substantial bridge. He suggested building a trail connection just above the stream, connecting to Greathouse Park to the west, which is already included in the city's overall trail plan. In that instance, the city could partner to build pieces of trail to the park, he said.

If the developers decide to build the bridge over Town Branch, the cost would be on them, Mihalevich said. The city is prepared to put a pedestrian crossing with lights across 15th Street, which would connect trails at the Sanctuary at SoFay property to smaller streets and trails to the north, he said.

The city generally supports projects expanding the trail network, Mihalevich said. He said he's been in contact with the development team.

Kurt DeLashmet has lived next door to the property for three years and said he knew something would pop up in the empty field next to him eventually. It's just difficult to be excited about it, he said.

DeLashmet said he's had positive interactions with members of the development team. However, he and another neighbor declined to sell parts of their land for the development. He said he hopes the developers take into account the level of change to south Fayetteville their project will bring.

"It just looks so out of place, you know?" DeLashmet said. "It's kind of hard to imagine a thing like that going into this area."

The hope is to break ground on the project next summer, Long said. Estimated construction time is eight to 12 months.

Long said he was unsure of potential prices of the residential units because overall construction costs are still in development. 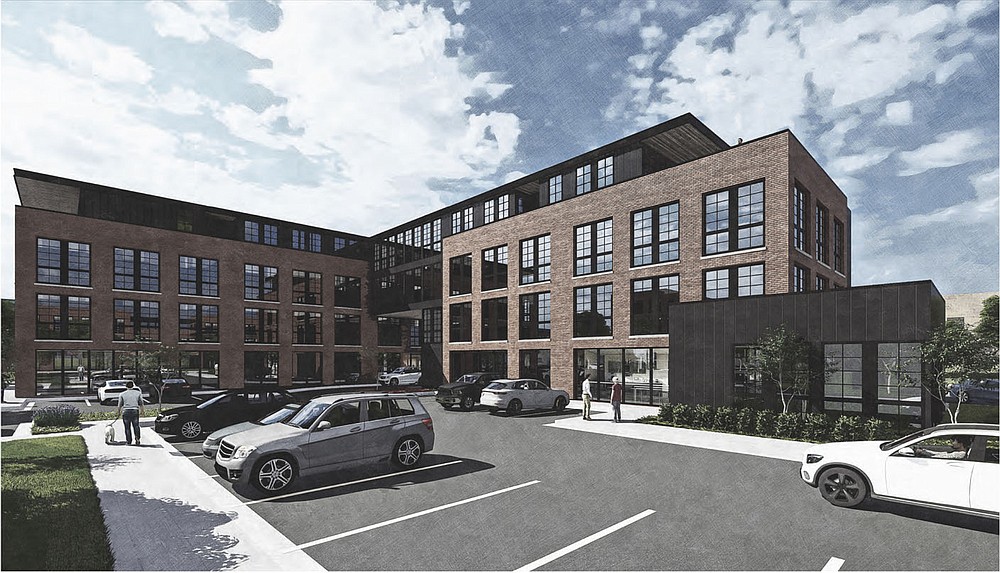 A rendering shows the rear view of the planned Sanctuary at SoFay mixed-use development project in south Fayetteville. The City Council on Tuesday will consider a rezoning request for the project. (Courtesy Photo/ELONG Architecture+Planning)
More News

To participate in the online City Council meeting at 5:30 p.m. Tuesday, go to fayetteville-ar.gov and click on “Participate in public meetings.”