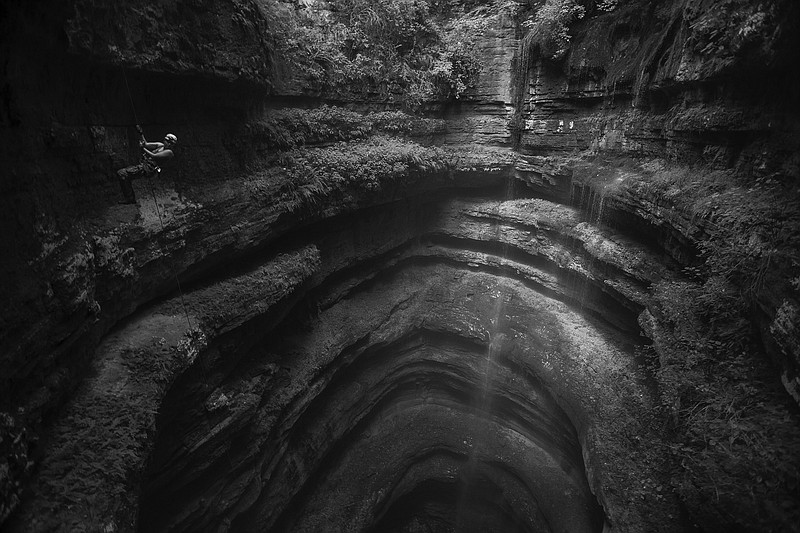 The mouth of Neversink Pit in Fackler, Ala., is an example of the beauty caves have to offer. It also highlights how dangerous the activity can be. (Special to the Democrat-Gazette/Ryan Mauer)

Humans are inquisitive creatures. We have pushed boundaries to reveal new frontiers since we've roamed the Earth. Once we mapped the surface of our planet, we pushed outward into space to unlock more mysteries of the natural world. But there is a frontier much closer than even the Moon. It's right under our noses.

"Hidden Nature: Wild Southern Caves," released in August, guides readers through an underground wilderness in the South. Along the way, Michael Ray Taylor, a mass media professor at Henderson State University, rhapsodizes about his caving life and his fellow explorers. The book is about what caves contribute to science and culture, but it's also about the community of cavers that spend their lives poking around in the dark.

That word, "cavers," is important to those of Taylor's ilk. They're not "spelunkers," a term coined by a Boy Scout leader with little experience caving, as Taylor's book explains:

"Over the next hour I learned that 'spelunker' was a term of derision. Cavers had been caving for decades by the time a New England Boy Scout leader coined 'spelunking' for a 1930s expedition that popularized it in the press. A bumper sticker sold at caving conventions summed up the difference: 'Cavers Rescue Spelunkers.'"

"This is a personal passion. So if I tried to write a book that was pure reportage, that would be — I think — a little dishonest because my personal experience is what has driven me to these stories and makes me want to tell them," Taylor says. "And the other thing is, my other book, 'Cave Passages,' most of it was written when I was in my 20s. It was published in my early 30s. I was really into caving then, I'd been doing it a little over a decade at that point. But now that I turn 60 this year, while working on this book, in fact, I have a different perspective. I realize with age that I was not only learning about caves, but I was also shaped by this culture of caving that I had entered."

In some ways, that culture's history was a history of his own life, he says. And that makes sense when you look over his book-publishing career. "Cave Passages" was released in 1996 and focused on the practical aspects of caving and the personal connection to nature caving cultivates. Then, he released "Dark Life" in 2000, about Taylor's discovery of extreme organisms found in caves that were subsequently used by NASA to better understand how life could exist in outer space. The next year, he collaborated with Ronal C. Kerbo to write "Caves: Exploring Hidden Realms," a companion piece to "Journey Into Amazing Caves," an IMAX film narrated by Liam Neeson.

Taylor also co-wrote a comics textbook with two other HSU professors, and he wrote a book from the perspective of a cat — so don't pigeonhole him.

Now, 24 years after that first book, he is revisiting some of its subjects. But, this time, with the distance of time that has weathered him and left the caves largely unchanged.

The book covers what Taylor calls the Golden Age of Cave Exploration. Caves have shed light on many areas of life on the surface, from the early days of humanity when caves were used for shelter and their walls were drawn on with smoke, to roles that caves play in underground water systems we depend on for survival today.

But these underground troves have been left unseen until recently when cavers started to map out places no human had been before, at a surprising pace. The Tennessee Cave Survey lists 10,000 in that state alone. And there are many more to be discovered in the South.

Cavers often study maps and investigate leads for months or years to find where they think new caves may be found. It's this meticulous surveying and, of course, the adventurous spirit that leads people underground, that draws enthusiasts of all types.

"Cavers run the gamut of educational backgrounds from people with PhDs and scientists at big universities to people who never finished high school,'' Taylor says. "And yet something they all have in common is the simple fact of going underground, of learning the methods and techniques of getting into passages and understanding how caves form and how the groundwater interacts with them, basically, things that help you stay alive or to find a new cave nobody's been in. Once you start learning these things, you learn a lot of other things."

One way that Taylor has chosen to portray the caving community is in their own words and photos. But not just quotations and shared pictures. He decided that he needed to create interludes for his chapters. The overarching story is told through a series of smaller stories that stand on their own. So between each, he grabbed social media posts to break it up.

"The focus is on the caves of the South, and all of the people whose Facebook posts I use are Southern cavers who might not otherwise be in the book just because they weren't involved in a particular trip I went on or am reporting on. But it is a broad culture, and I'm glad I can give some of them a voice in between the chapters, too."

And the book reads like it was written by a man who reveres cavers. He mentions Marion O. Smith, known as Goat among cavers. Smith is the "patriarch" of caving, having been to more than 8,000 caves over 77 years. He was the subject of a profile in Sports Illustrated by Taylor.

In the book's final chapter, Taylor is spinning a yarn about the National Speleological Society's annual convention. The Social Interlude is a post of Taylor's own with the Goat, who's wearing a shirt that reads "Older than Dirt." The post explains that Smith dubbed the photo Bloat and Goat. In the first chapter, Smith is quoted as saying, "I'm lazy," when describing his lack of technical skills. Such anecdotes reveal an intention of Taylor's to write a true portrait of the caving community, not to hero-worship. Still, it's clear that he admires Smith and other cavers.

"My first book was really, truly about caves and trying to describe the heroic figures of cavers, but this book is more about the human figures of cavers," Taylor says. "Yes, some of them are driven. Yes, some of them make discoveries that are heroic in a sense that you rarely see these days but that was common maybe in the 19th century. But really they're just people. They're a group. But it's an interesting group, and I wanted to write about it."

The writing is what you'd expect from a professor who teaches journalism courses. It's full of information with little fluff. Even when Taylor waxes poetic, it's through the use of direct, taut language.

Taylor's prose is like his precious caves. If you're willing to get on your belly and carefully crawl through the tight, spare passages, bellowing wonders await.