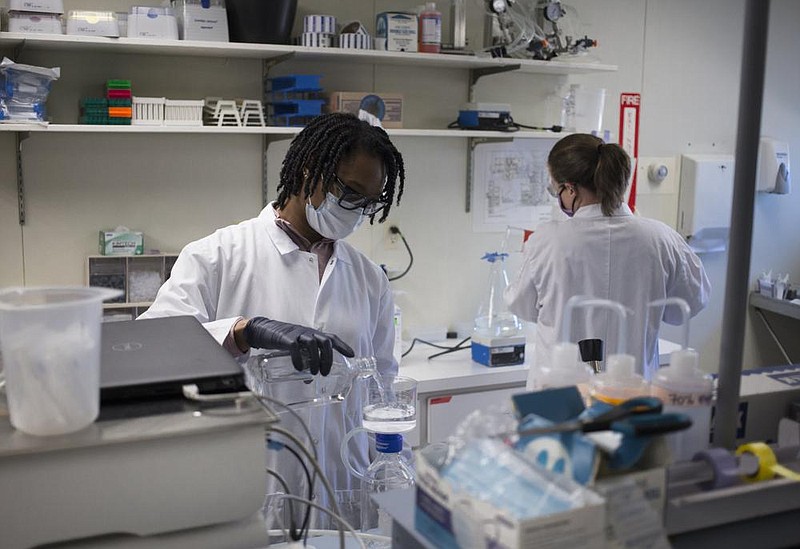 ROGERS -- Pel-Freez, a Rogers rabbit meat processor and supplier of biomedical products, is shaking things up.

For years the company flew under the radar, quietly shipping food, animal tissue and blood samples to customers around the world. With a catalog of more than 1,300 biological products and distributor demand for rabbit meat, Pel-Freez had enough work to stay busy. It didn't advertise, pursue other sales channels, or update its buildings and equipment.

Brian Bonk, 33, is trying to change that. He is the company's new president and chief executive officer.

"It's been one of the coolest things I've ever done, but it's also like being thrown into the fire," Bonk said. His firm bought the company earlier this year as the coronavirus pandemic struck, affecting both sides of the business in different ways. With restaurants closed, Pel-Freez had too many rabbits on hand. It also saw increased demand for reagents and other products used in covid-19 diagnostic tests.

Making up for losses in food sales has been one of the toughest hurdles for the company, Bonk said, but the pandemic has presented "so many opportunities now it's hard to know what to go after."

One route is pursuing retailers and area chefs to get meat products on store shelves and restaurant menus. Another is expanding its biological products line to help fight the pandemic.

"People think of us as a rabbit company, but we are supplying essential reagents to the world's top selling vaccine companies," Bonk said. "This humble little company is saving lives."

Founded in 1918, Pel-Freez began in California after Herman Pelphrey accidentally gifted his son a pregnant rabbit. According to company lore, the residence became overrun with rabbits, and the founder, in response, started selling the meat to neighbors.

H.F. Pelphrey Co. grew during World War II and changed its name to "Pel-Freez" in the late 1940s, when the hot trend was frozen foods. The company eventually relocated to Rogers where land was cheaper and expanded to include a biological arm that sold blood samples and animal tissue to researchers.

In general, food and biological sales make up about half of the company's revenue. Bonk said the food sales offset the raw material costs of the biological side, resulting in about 95% of the gross margins from animal serums, powders and tissues. 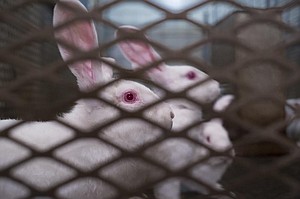 Photo by Charlie Kaijo
Rabbits for processing are held inside the Pel-Freez facility in Rogers. The company is one of the country’s largest rabbit meat processors. (NWA Democrat-Gazette/Charlie Kaijo)

Food sales declined during the pandemic, however. Without that revenue Pel-Freez increased prices on the biological side as much as 38%, he said. But that wasn't enough.

"Suddenly we had too many rabbits on the meat side and had to find other ways to sell them," Bonk said. The company is working to sell more rabbit meat to retailers and forging local partnerships to compensate. It also set up a makeshift shop that sells whole meat rabbits, legs and other parts out of its distribution center at 219 N. Arkansas St.

"It's been kind of a mixed blessing," he said. The pandemic presented an opportunity to rebuild the company's brand.

As part of its ongoing marketing efforts, a Pel-Freez rabbit cookbook is in the works with recipe submissions from area chefs and residents. Those chosen to have their recipes in the book will receive complimentary meat, Bonk said.

Inspired by dishes in Mexico City, Rafael Rios, chef and owner of Yeyo's Mexican Grill in Bentonville, recently hosted a pop-up event and served barbacoa rabbit from a taco cart in Rogers.

"We wanted to see what kind of diversity we could get out of cooking with rabbits," Rios said. "It's so universal, and most countries still widely use it for cooking specialty dishes."

Rabbit is widely eaten in China, Mexico, Italy and other parts of Europe, according to the Food and Agriculture Organization of the United Nations. It was more common in the U.S. before the mass production of pork, beef and chicken took hold. Meanwhile, U.S. rabbit sales steadily declined.

According to the 2017 Census of Agriculture, about $9.2 million worth of meat rabbits were sold in the U.S., down roughly 40% from five years previous. The number of meat rabbit farms declined to 4,186, the most recent data show.

About 100 people showed up at the Yeyo's pop-up and "honestly, the product was really good," Rios said. He submitted the dish for the Pel-Freez cookbook and has plans to add rabbit to his restaurant's menu in the near future.

Bonk, whose background is in life sciences, is quick to point out the growth potential of Pel-Freez. He noticed that a potential career track for recent graduate students was finding a viable business where the kids didn't want to take over. Bonk saw a lot of options in the life sciences field, got funding from investors and traveled the country for two years before deciding on the Rogers processor.

"There were a lot of spooky coincidences," he said. One of the reasons the deal even happened was because the former owner's manager, who was vetting emails at the time, had the same maiden name "as my weird last name," Bonk said.

The company also had a hand in two very different fields. In short, food companies didn't want it and neither did private equity firms.

"It's a gem," he said. The biological side is a supplier to some of the top vaccine and pharmaceutical firms. There are also few, if any, direct competitors.

Bonk said he had reservations about owning a meat company.

"I eat meat, but it's weird to be the one doing it," he said. "But it's not a hard ethical question. We make sure all the rabbit goes to use."

In years past, animal welfare groups have targeted the processor. In 2015, activists went undercover and recorded instances of workers breaking the rabbits' rear legs and improperly stunning them before slaughter. Last Chance for Animals requested animal cruelty charges be filed against the workers, but none were filed.

Bonk said necessary changes were made, and he considers it a lesson learned.

"It was a good thing that it happened," he said. "Now we get perfect animal welfare audits."

Challenges that Pel-Freez is facing at the production level are more disease-related these days. The company has safety measures in place for workers to wear masks and get their temperatures checked daily during the pandemic, Bonk said. There are also social distancing policies in place, and employees who can work from home are encouraged to do so.

"It's a challenge getting 65 people to follow the rules, but I think people have been pretty helpful in self-enforcing it," he said.

As of Monday, 10 workers were out getting tested for covid-19 after coming in contact with an infected person. Three workers have tested positive for the virus, so far.

Another disease that has the company on its heels is one affecting multiple states across the Southwest: Rabbit hemorrhagic disease. It is highly contagious, and fatal to domestic and wild rabbits, according to the U.S. Department of Agriculture. The disease does not affect humans.

"We've been monitoring it very closely," Bonk said. The company has notified its contract growers and provided guidelines for how to prevent the disease from affecting their herds. The nearest reported cases are hundreds of miles away.

"If we got a case in the plant, it would be devastating," he said. "The stakes are high, and it would ruin our growers."

Pel-Freeze has contracts with about 250 growers in the Midwest. About 90% of them are two hours away in Kansas and Missouri, living on Amish farmsteads.

The average farmer is paid about $1.75 per pound for fryers and 70 cents for roasters. The standard retail price is about $20 for a whole rabbit.

Bonk's vision for the company is to develop the biological side and continue to grow the meat side. The young executive said he wants to increase the company's supply chain, getting more rabbits and raw materials, while making a big sales and marketing push.

"We really should be in Whole Foods and Costco and these places, but we're not because we never pursued any of those sales channels," Bonk said. He also has plans to grow its pet food division and start selling rabbit ears as pet treats.

The company used to sell "lucky rabbit" key chains made from the paws.

"Not sure how well that would play today," Bonk said.