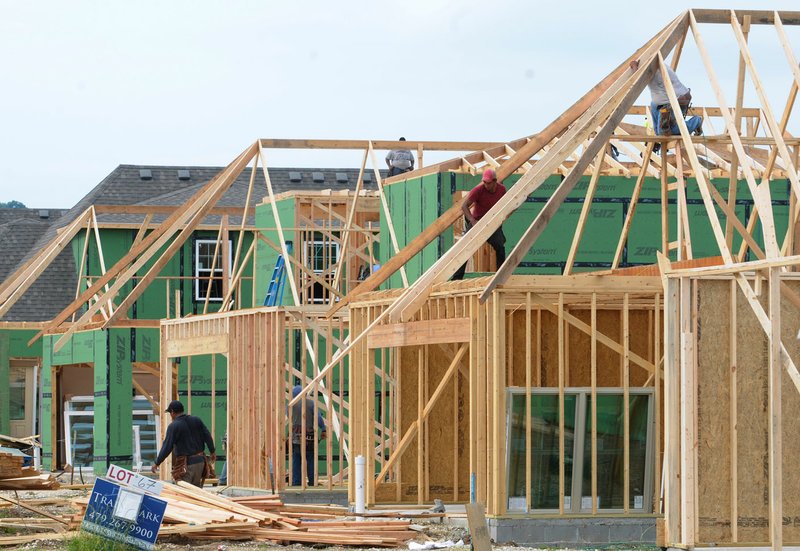 Construction continues Wednesday, May 23, 2018, on houses near the intersection of West Tuscan and North Malbec Roads in Fayetteville.

The coronavirus pandemic hammering the U.S. economy is leaving the real estate market in Northwest Arkansas generally unscathed, so far.

That's the verdict of the recently released Skyline Report, which examines the residential, commercial and multifamily real estate market in Benton and Washington counties for the first six months of 2020.

Mervin Jebaraj, director of the Center for Business and Economic Research at the Sam M. Walton College of Business at the University of Arkansas, Fayetteville and lead researcher for the report, said during a recent Zoom call that supply and demand in the market are keeping home prices high and vacancy rates in the multifamily sector low.

According to the report, the number of listed homes in the two-county area was down nearly 50%, to 1,206, when compared with the first half of 2019. During the same period, the number of lots available to build new homes in active subdivisions stood at 3,896, down more than 50% when compared with the same period in 2015 and the lowest number since the report began in 2004.

Jebaraj said sales of single-family homes are strong, adding that the inventory of available homes is down significantly, driving up home prices.

The percentage of new-construction sales was 28.5%, the highest rate since the report began, mostly on the lack of existing homes offered for sale.

Doyle Yates, executive vice president with the real estate company Coldwell Banker Harris McHaney and Faucette, said in a phone interview Tuesday that his experience mirrors the findings of the report -- that there is high housing demand in Northwest Arkansas because of limited inventory. He said he's seeing more sales in the new-home segment as well because there are fewer previously owned homes being listed currently.

He said record-low mortgage rates are pushing some buyers who might have been on the fence into the market. And buyers who already own houses are looking for places with more outdoor and potential office space as they try to deal with covid-19, which is keeping them close to home and working from there.

Yates said that when coronavirus cases were discovered in Northwest Arkansas, it did affect the number of listings, with some people even pulling their homes from the market. He said more sellers have been coming back to the marketplace recently, but there are still fewer listings than normal.

The value of multifamily building permits for the period was $481.5 million, crushing the earlier high of $372.9 million booked in the second half of 2018.

In commercial real estate, vacancy rates dropped to 10.8% for the first half of the year from 11% for the same period a year ago. The office segment vacancy rate was 9.8%, up from 8.6% a year earlier. That increase is attributed to an addition of 330,000 square feet of new space.

Jebaraj said the office segment is holding its own despite an estimated 40% to 45% of employees not being at their usual work locations. He said that going forward, offices would likely move away from open floor plans and back to the cubical and office format because of concerns brought on by covid-19.

Arvest Bank first sponsored the Skyline Report in 2005. Researchers at the University of Arkansas' Center for Business and Economic Research compile data for the report.