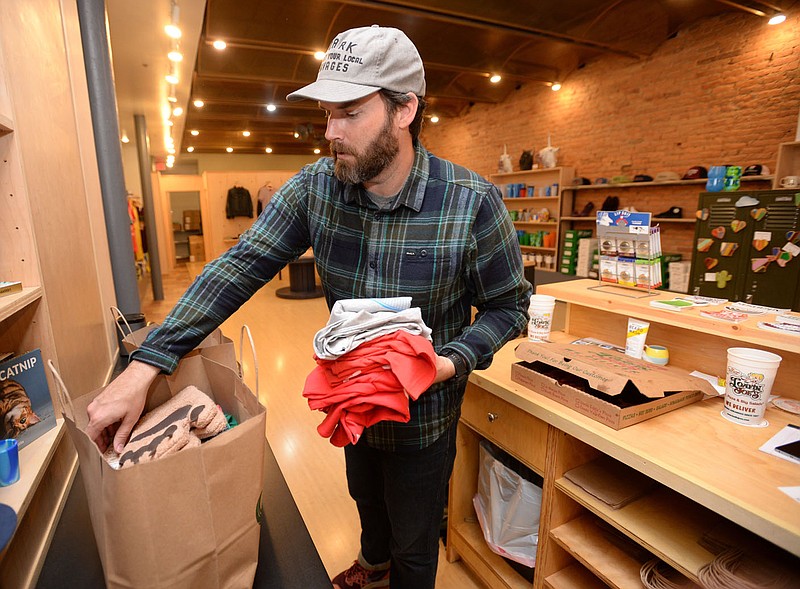 Brian Bailey, owner of The Mustache Goods and Wears on the Fayetteville square, fills orders placed online for curbside pickup April 23 in the store. Retail and online sales have gone up during the pandemic, while restaurants, hotels and department stores have struggled, according to an economic update for the City Council. (File photo/NWA Democrat-Gazette/Andy Shupe)

FAYETTEVILLE -- Restaurants, hotels and department stores in the city have struggled mightily during the pandemic while retail and online sales surged, according to figures the City Council saw Tuesday.

The three entities teamed up once the pandemic hit in mid-March to prepare for the economic toll, Economic Vitality Director Devin Howland said.

The city coordinated weekly with municipal economic development departments across the country. Startup Junkie took charge providing near daily guidance to businesses in English and Spanish to navigate numerous federal and state aid programs. A task force on small businesses resiliency formed. The Outdoor Refreshment Area was implemented downtown, giving businesses more room to operate. More than 165,000 masks went out to more than 1,500 businesses. The chamber fielded calls from non-members and members alike, pursued economic development grants and is working on a diversity, equity and inclusion online training program.

Lodging and food service sales dipped most dramatically in April, with $18.5 million in sales. April 2019 sales were $30.2 million.

Department stores also reported a fraction of their usual sales but showed promise, climbing from a low point of $276,813 in April, to nearly $1.5 million in May, to $2.3 million in June. April through June last year averaged about $3.4 million in department store sales.

Retail fared much better. Retail sales have stayed at or above last year's figures since the pandemic started forcing business closures. June saw $127 million in retail sales, compared with $106 million in June 2019.

"People were home more," Howland said. "Grocery store sales were up. You saw bulk buying, and that's reflected in the sales."

Internet sales from the most popular websites such as Amazon more than doubled. Residents online spent nearly $9 million in April, nearly $10.8 million in May and $10.6 million in June. Numbers for the same months in 2019 were $3.8 million, $3.5 million and $3.4 million, comparatively.

Startup Junkie continued its mission but with an online focus. The consulting firm assisted 528 entrepreneurs and held 142 events over the past year, switching to an entirely online operation in March.

"I think the business community has been extremely grateful for the timely information, education and inspiration we have been able to provide," said Brett Amerine, Startup Junkie co-founder. "At times we've been an ER doctor for many businesses in a sense."

Business closings have weighed heavily on everyone's minds, said Zane Chenault, chief economic development officer with the chamber. Economic officials can only track closings through news reports or notification through the businesses themselves, he said.

The chamber is working with 13 businesses wanting to start, move or expand in the city. Three are on hold because of covid-19.

The businesses deal with manufacturing, technology, medical, warehousing, distribution or similar fields, Chenault said. All combined, the businesses would bring about 250 new jobs with an average wage of $27 an hour or salary of $56,000.

Chamber officials are working as quickly as they can to bring the new jobs and businesses to the city, Chenault said.

"Obviously, this pandemic is going to impact everything that's going on," he said. "There will be some natural slowdown."

For more information, go to: