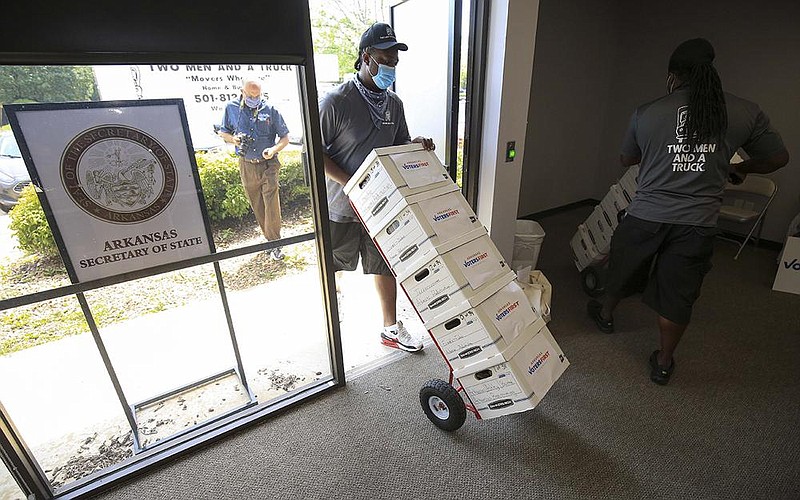 Movers Theo Reed (left) and Joe Mathews unload boxes of signatures from Arkansas Voters First on Monday, July 6, 2020, at the secretary of state’s office in Little Rock. The group was seeking a constitutional amendment that would establish an independent redistricting commission.

Secretary of State John Thurston certified for the Nov. 3 ballot proposed constitutional amendments on legislative and congressional redistricting and on ranked-choice voting for most state offices, plus a proposed referendum on a 2019 law that allows optometrists to perform a broader range of eye surgeries.

"We waited as long as we could to see if the [Arkansas] Supreme Court would rule on Redistricting, Open Primaries and Safe Surgery [ballot measures]," Thurston spokesman Kevin Niehaus wrote early Thursday evening in an email.

The state Supreme Court is considering whether to allow the proposals to be on the ballot.

The Republican secretary of state also certified proposed constitutional amendments referred to voters by the General Assembly in 2019. They would make permanent the state's half-cent sales tax for roads and highways (Issue 1); adjust term limits for state lawmakers (Issue 2); and make it more difficult to amend the Arkansas Constitution (Issue 3).

The Arkansas Voters First committee's proposed constitutional amendment would shift the authority for redrawing the boundaries of legislative districts from the state Board of Apportionment -- comprising the governor, attorney general and secretary of state -- to a nine-member independent commission comprising three Democrats, three Republicans and three independents.

In the general election, voters would then rank their preferred candidates one through four. If no candidate won an outright majority in that election, then the candidate with the fewest votes would be eliminated, and those voters' second and third choices would be added to the remaining candidates' tallies until someone obtained the majority threshold.

On Aug. 10, a special master appointed by the Supreme Court reported that depending on how the justices rule on the definition of criminal background check certifications, then the sponsors of the redistricting and open primaries ballot measures either failed or succeeded in submitting enough signatures for the next step.

The next step would be to have the secretary of state determine how many valid signatures of registered voters they have and, if there are not enough, whether they qualify for 30 more days to gather more signatures.

Canvassers, working on behalf of sponsors of initiated proposals, circulate petitions to gather the number of voter signatures needed to place the proposals on the ballot.

On July 14, Thurston sent two letters to attorney David Couch, who represents both committees, stating that some petitions were invalidated by an error regarding criminal background checks of canvassers, causing both proposed constitutional amendments to lack sufficient signatures to place them on the general election ballot.

On July 17, the Arkansas Voters First committee and the Open Primaries Arkansas committee appealed Thurston's rulings to the Supreme Court. A week later, the Supreme Court appointed Fogleman as special master and directed Thurston to continue a facial review of the redistricting petition and to begin verifying signatures on the redistricting and elections petitions. The high court also granted both committees a provisional 30-day cure period to collect more signatures.

To get on the ballot, the proposed initiated amendments need 89,151 signatures each.

On July 22, the state Board of Election Commissioners voted not to certify the ballot title and popular name of the Open Primaries Arkansas Committee's proposed constitutional amendment, and the committee has appealed that ruling to the state's high court, as well.

The Safe Surgery Arkansas committee proposed the referendum on the 2019 state law that allows optometrists to perform a broader range of eye surgeries.

Act 579 will allow optometrists to administer injections around the eye; remove bumps and lesions from eyelids; and perform certain types of laser surgery performed by ophthalmologists -- specifically capsulotomy, a surgery performed after cataract surgery, and trabeculoplasty, a procedure to reduce pressure from glaucoma.

Optometrists are still banned under the new law from doing cataract surgery and radial keratotomy surgery. The law also requires the state Board of Optometry to establish credentialing requirements for a license to administer or perform these new procedures.

The Safe Surgery Arkansas committee opposes Act 579 of 2019 and prefers the specified surgeries be performed by only ophthalmologists.

The Arkansans for Healthy Eyes committee supports the 2019 law and opposes the referendum.

On July 13, a special master appointed by the state Supreme Court released a report in which he concluded that the Safe Surgery Arkansas committee didn't submit enough valid signatures to qualify for the ballot.

The state Supreme Court appointed retired Circuit Judge Mark Hewett in April as a special master to determine some questions of fact raised in a lawsuit filed in late February by the Arkansans for Healthy Eyes committee. The committee is trying to stop the proposed referendum from being placed on the ballot.

The state's high court, after reviewing Hewett's report, will make its own decision.