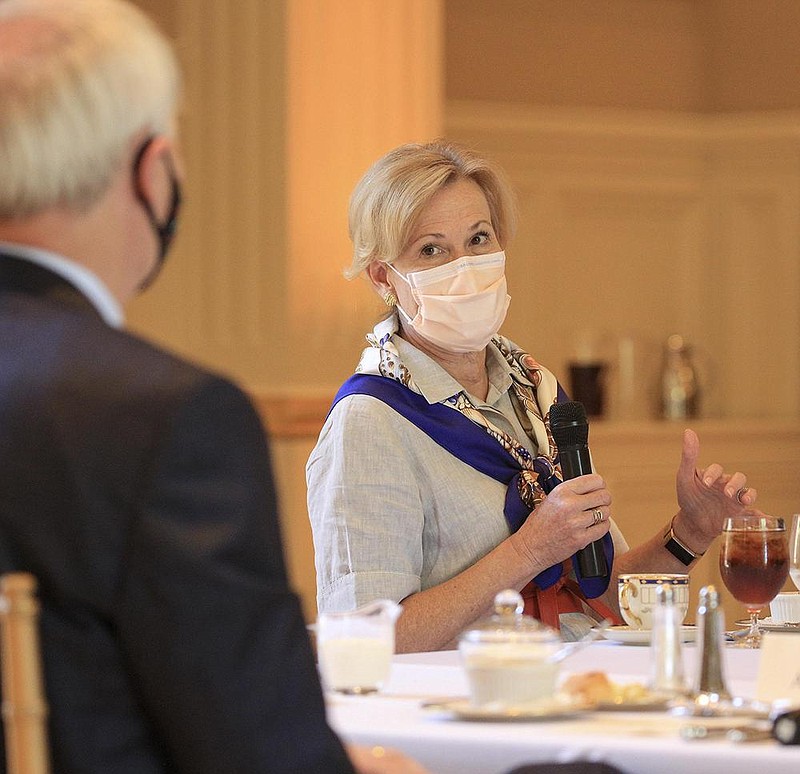 Dr. Deborah Birx answers a question from Gov. Asa Hutchinson on Monday during a roundtable dis- cussion with local leaders at the Governor’s Mansion in Little Rock. More photos at arkansasonline. com/818birx/ and arkansasonline.com/818gov/. (Arkansas Democrat-Gazette/Staton Breidenthal)

Americans are weary of covid-19 and reluctant to commit to a long-term battle against the pandemic, the White House's coronavirus response director, Dr. Deborah Birx, said Monday in Little Rock.

Covid-19 fatigue could undermine efforts to limit the spread of the virus, she told state leaders during a meeting at the Governor's Mansion.

"We just have to give people a timeline that's manageable," she said.

Birx made her comments shortly before the state released its daily covid-19 data.

Arkansas recorded 412 new cases of the coronavirus on Monday and four more deaths, lifting the number of fatalities to 603.

[Video not showing up above? Click here to watch » https://www.youtube.com/watch?v=80h-uzw6z9I]

After five months of restrictions, nerves are fraying, Birx suggested.

When Americans are told, "We could be living with this virus for years," their response is often, "'I can't live like this for years.' And they're willing to give up," Birx said.

Even those most at risk because of health issues are struggling, she said.

"I talked to a nursing home resident yesterday in Oklahoma, and she was like: 'We can't keep this up. If you give us a timeline, we may be able to hold on another two or three months. We might be able to hold on till the holidays. But you can't tell us that this is going to go on like this into 2021,'" Birx said.

That sentiment is shared by others, Birx said.

"I've been so struck by the number of Americans across the country that have just had it," she said.

"When people start to realize that 99% of us are going to be fine, it becomes more and more difficult" to get people to comply, she said.

"We're finding that now that the majority of the community spread is happening from people having parties: backyard parties, birthday parties, weddings, socials, thinking it's just the neighbors or just my family from across the state," she said.

"Somehow, we always assume our family members are safe," she said. "They should never assume that they don't have covid."

At a news conference afterward, Birx was asked why America, with all its resources, isn't leading the world in covid-19 containment.

"I wish that when we went into lockdown, we looked like Italy," she said. "But when Italy locked down, people weren't allowed out of their houses and they couldn't come out but once every two weeks to buy groceries for one hour, and they had to have a certificate that said they were allowed.

"Americans don't react well to that kind of prohibition," she said.

Birx said she's been asking officials, "What would their citizens do? What are they willing to do?"

"When you're asking people to change behavior, you have to meet them where they are," she said.

A fixture at President Donald Trump's March and April covid-19 briefings, Birx spent much of the summer consulting with state and local officials.

On Saturday, she stopped in Kansas City, Kan. On Sunday, she visited Tulsa.

Monday was spent in Central Arkansas.

"This is our 19th state just in the last six weeks. We've been going state by state," she said.

Daily covid-19 cases in the Natural State have been falling in recent days, reversing a nearly three-month trend.

"What we've seen in Arkansas over the last couple of weeks is really the start of some improvement. Improvement in this [Pulaski] county, in Washington County," Birx said.

She said she believes the progress has occurred because "the people of Arkansas are following the important, common-sense path forward to get control of this virus. It starts with wearing this mask all the time, 24-7. Indoors, outdoors. Continuing to social distance," she said.

Including Monday's 412 new cases, the total number of Arkansans who have tested positive for the virus during the pandemic rose to 53,077.

The state reported eight additional hospitalizations on Monday, for a total of 486. There were 120 patients on ventilators, no change from the previous day.

Birx said Hutchinson has "a whole series of mitigation efforts planned if cases go back up" and that steps had been taken to prepare for the upcoming school year.

Before leaving, Birx again stressed the importance of facial coverings and social distancing.

"Tens of thousands of lives will be saved if we wear masks and we don't have parties in our backyards," she said.

"Somehow, we always believe our family's safe and our friends are safe. You cannot tell who's infected with the virus, and so you need to keep your mask on," she said.

At his near-daily covid-19 briefing afterward, Hutchinson said the latest trends are encouraging.

"There was reduction in our [positivity] rate, and secondly a reduction in our cases," Hutchinson said. "I was delighted that [Birx] recognized that, with the White House Coronavirus Task Force.

"Clearly, we have a downward trend over the last week to 10 days," the governor continued. "I'm not necessarily saying that is going to continue, because that all depends upon individual behavior of people in Arkansas, compliance with the mask mandate, making sure you social-distance, making sure that you don't get into large gatherings without being protected or protecting others."

The Arkansas Department of Health revised its official coronavirus tracking data over the weekend to exclude out-of-state and duplicate cases that had previously been counted in the state's caseload, Romero, the health secretary, said.

The review of the state's data resulted in the number of total cases being revised down by 1,200 while one death previously attributed to the virus in Arkansas was removed from the Health Department's data.

Romero said the death occurred out of state and had been identified as a covid-19 patient because of a false-positive test.

In addition, he said, the department added a net of about 6,000 negative test results to the Health Department's testing data.

The state's plan to deploy up to 3,600 antigen tests to local health offices may have to be delayed after the federal government purchased many of the testing kits in the supply chain, Hutchinson said Monday.

The governor said he was made aware of the issue during his meeting with Birx earlier Monday. He said the state is still waiting for the delivery of more than half the antigen testing kits ordered last month.

"She indicated that the federal government has made the acquisition of much of the antigen testing supplies that we were reliant upon and that they're going to put the priority on the nursing homes, and to make sure that they have the testing material that they need to conduct the tests with the most vulnerable population," Hutchinson said. "That will make us adjust our timeline."

Antigen tests are considered less reliable than other, lab-confirmed tests, according to the U.S. Centers for Disease Control and Prevention. However, they provide results much quicker, in less than an hour.

The Health Department announced July 27 that it had ordered 200 antigen testing machines from Becton, Dickinson and Co., along with enough kits for 3,600 tests. The governor had touted those tests as a way for local health units to identify cases in schools, which open next week.

As of Monday, the state had received all of its machines but only enough kits for 1,200 tests. That was "enough to get started," the governor said.

Results from antigen tests are not included among the state's official case totals, however. People who test positive through an antigen test can be referred for more comprehensive testing.

State prison and health officials detected outbreaks of the coronavirus at two more state prisons over the weekend after beginning a campaign to test inmates throughout the system.

Arkansas Department of Corrections spokeswoman Cindy Murphy said the testing campaign uncovered 67 cases at the Benton Unit in Saline County and 103 cases at the Varner Unit in Lincoln County. The two prisons join a dozen other state and federal prisons in Arkansas where the virus has spread among prisoners.

The Varner Unit houses the state's death row; the virus has not been detected among any of the men serving there, Murphy said.

On Monday, the Department of Corrections also reported the state's first death of a female prisoner from covid-19.

The prisoner, whose name was not released, was a woman in her late 30s serving a sentence for second-degree murder at the Wrightsville Unit's Hawkins Center, Murphy said. She was being treated at UAMS Medical Center in Little Rock.

She is the 36th Arkansas prisoner to die as a result of covid-19.

A total of 5,028 state prisoners have tested positive for the virus out of more than 13,000 tests conducted.

Students attending college in Arkansas but who are from outside the state will be counted differently in case totals depending on the date of their positive test, according to a state Department of Health spokesman.

For a two-week period that has yet to be determined, out-of-state college students testing positive will not be added to state totals, department spokesman Gavin Lesnick said Monday.

Lesnick corrected information he provided Sunday to the Arkansas Democrat-Gazette, when he said the two-week period would depend on a student's arrival in Arkansas.

On Monday, Lesnick said in an email that "we no longer intend to tie the 2 weeks to the arrival date and will set a date when that 2 weeks goes into effect."

He said the date "will likely be based on the start of classes, but that has not been finalized."

After the two-week period, out-of-state student cases are to be added to Arkansas' covid-19 totals, Lesnick said.

Hutchinson said at Monday's news conference that he thought it would be appropriate not to have out-of-state student cases immediately count in the state's totals.

"That actually makes sense to me, because if they're coming here, obviously if they test positive within the first couple of weeks, it indicates they acquired the virus from their previous state. After that, it should be counted here in the state statistics," Hutchinson said.

Hutchinson said it's important that state health officials know about the cases involving out-of-state college students during the two-week period "for informational purposes and for contact-tracing purposes."

Lesnick said there will be a similar two-week period affecting covid-19 case counts for college students from Arkansas attending a campus outside their home county.

"We do plan to do the in-state reporting in the same way, where the first two weeks will be attributed to the home county and then after that it would go to where the campus is for our overall tracking," Lesnick said.