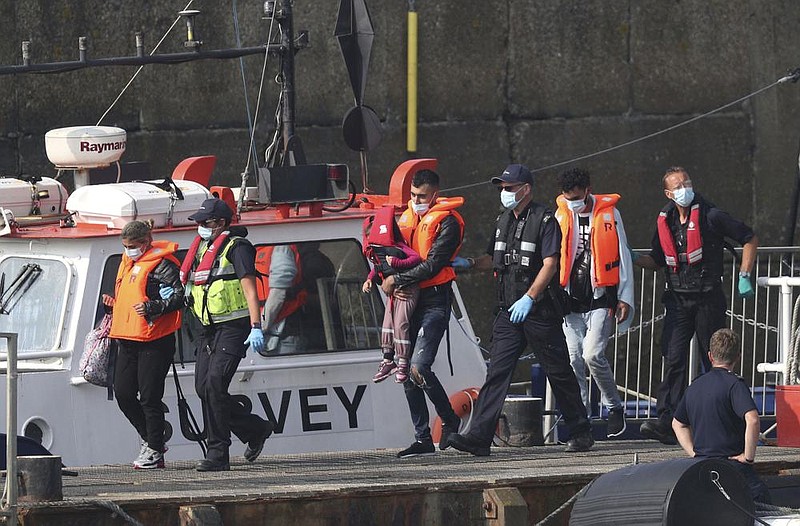 LONDON — Migrants crossing the English Channel arrived in the southern English port of Dover for the 10th day in a row Thursday, as British officials hardened their rhetoric against asylum-seekers.

The migrants, including children, were taken aboard a Border Force patrol boat into Dover harbor, where immigration officials conducted routine assessments for symptoms of the coronavirus.

More than 650 migrants have crossed the Channel, one of the world’s busiest waterways, in small boats so far this month, encouraged by favorable weather. The numbers peaked on Aug. 6, when a record 235 migrants made it to England.

The Kent County Council, which oversees the area around Dover, said it could be just “days away” from being unable to look after more asylum-seeking children arriving on its shores.

The government asked for military assistance in a bid to make the crossing “unviable” for small boats. The Royal Air Force in recent days has been patrolling the English Channel with a new plane designed for anti-submarine warfare.

But Britain’s attempts to put pressure on France to take tougher action to stop migrants from setting out on the perilous voyage has drawn ire from French officials.

The mayor of the French port of Calais reportedly said Wednesday that proposals to send the Royal Navy into the English Channel to tackle migrant crossings was a “declaration of maritime war.”

GAZA CITY, Gaza Strip — The Israeli military said it struck Hamas militant sites in the Gaza Strip early Thursday in response to continued launches of explosives-laden balloons from the Palestinian territory into Israel.

The military said its targets included a compound used by Hamas’ naval force and underground infrastructure and observation posts. There were no immediate reports of casualties on either side.

Israel and Hamas have fought three wars and numerous smaller flare-ups since the Islamic militant group seized control of Gaza in 2007.

The enemies have largely observed an unofficial truce in recent months, but recent days have seen a resurgence of the incendiary balloons that militants have sent from Gaza that have set off fires in neighboring Jewish agricultural lands.

Israel holds Hamas responsible for all fires out of the coastal enclave. As part of its reprisal, Israel also announced that it would halt the import of fuel into the Gaza Strip and reduce the fishing area off the Gaza coast.

Fighters linked to the Islamic State took control of a northern Mozambican port town that has been a key logistics link for a $23 billion natural-gas project that Total is building, according to Risk Advisory Group.

It’s the third time this year that insurgents have seized Mocimboa da Praia, about 37 miles south of the LNG project and the closest harbor. About three months ago, fighters that first pledged allegiance to ISIS in 2018 occupied it for as long as three days.

The site of Total’s project is in the preparation stage, with the company having recently finalized an initial $15 billion of financing and the town is among several access points to haul in supplies, including a port and airport at the development. The fighting, though, shows an escalation of insurgent attacks in the region that authorities are battling to contain.

“The capture of Mocimboa da Praia, as well as the previous assaults on district capitals since March, shows that the capabilities of IS militants has improved,” Tristan Gueret, an analyst at RAG in London, said by email Wednesday.

Gas projects in the country’s northern-most Cabo Delgado province are central to plans to transform the impoverished southeast African nation.

The statement from New York-based Human Rights Watch quoted Ethiopian migrants who said Houthi fighters in April rounded up thousands of them from their unofficial settlement area in al-Ghar town in the country’s northwestern Saada province. The migrants said they were forced into pickups and driven to the nearby Saudi border.

Once the Ethiopian migrants arrived at the Saudi border, they got caught up in clashes between their Houthi escorts and Saudi border guards, the rights group said.

Yemen’s ongoing civil war pits the Houthis, who occupy the north, against a U.S-backed and Saudi-led coalition that supports an internationally recognized government in the south.

“United Nations agencies need to step in to address the immediate threats to the Ethiopian migrants and press for accountability for those responsible for the killings and other abuses,” Nadia Hardman, refugee and migrant rights researcher at Human Rights Watch said.

Neither Houthi nor Saudi officials could be immediately reached for comment.