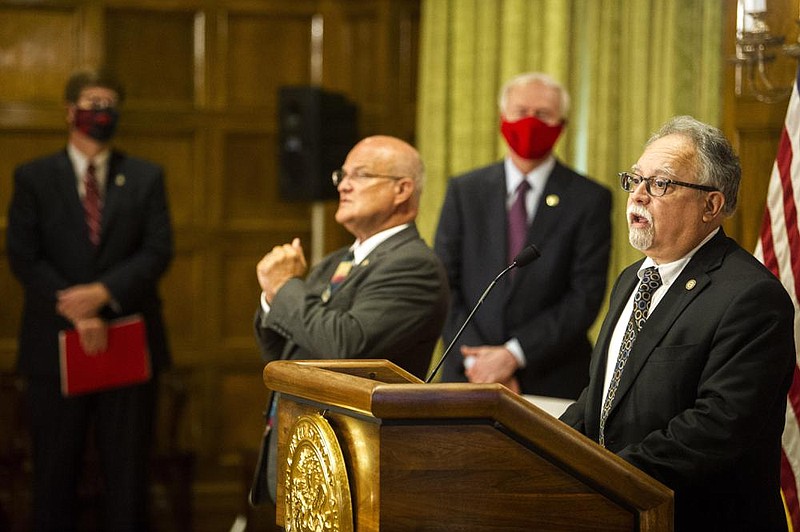 “If we have a day or two of this, we can definitely say there’s a downward trend,” state Health Secretary Jose Romero said Tues- day after the latest virus numbers were released. (Arkansas Democrat-Gazette/Stephen Swofford) - Photo by Stephen Swofford

Arkansas recorded a month-long low in new coronavirus cases, as well as tests Tuesday, even as the number of reported deaths from the virus rose by 11, bringing the toll to 566.

The 383 new cases announced by the state Department of Health was the lowest one-day increase since July 7. However, that drop also coincided with a similar low of test results being reported, at just 4,140.

Gov. Asa Hutchinson expressed optimism in the numbers, but warned that without more testing, it was too early to "get cocky" about an end to the plateau of caseloads that the state has been on for about a month.

"Even if you looked at it from that perspective, we still had a good day," Hutchinson said.

The total number of covid-19 cases identified in Arkansas since the beginning of the pandemic rose to 50,411 Tuesday. Of those, 6,847 were considered active, meaning that the person who tested positive has not recovered or died.

[Video not showing up above? Click here to watch » https://www.youtube.com/watch?v=j8Clv7MYP8w]

Hospitalizations for the virus fell by one on Tuesday, to 507. The number of patients on a ventilator also declined by one, to 116.

Hutchinson and his secretary of health, Jose Romero, continued to express optimism Tuesday that a statewide mask mandate put into effect in mid-July was beginning to produce a decline in case counts.

Only three counties in the state recorded 20 or more new cases of covid-19 on Tuesday. They were: Pulaski County, with 63 cases; Sebastian County, with 31 cases; and Carroll County, with 20 cases.

"If we have a day or two of this, we can definitely say there's a downward trend," Romero said.

Hutchinson and Arkansas Education Secretary Johnny Key also announced Tuesday that school district-level covid-19 data would be made available for the first time this week through a partnership with the Arkansas Center for Health Improvement.

Hundreds of thousands of kindergarten-through-12th-grade students, and tens of thousands of teachers and staff are scheduled to start returning to Arkansas classrooms in less than two weeks, during the week of Aug. 24.

The Center for Health Improvement, through a partnership with the Health Department, has released city-level covid-19 data since last month. The school district-level data will be similar and will consist of cumulative cases, active cases and the percentage of how many covid-19 tests showed infections.

Richard Abernathy, the executive director of the Arkansas Association of Educational Administrators, said the organization had requested the school district-level coronavirus data, but he wasn't sure that the state had the technology to provide it that way.

"I'm glad they're able to do that," Abernathy said.

Abernathy said the school district-level coronavirus data will be particularly helpful for districts that are in more than one county.

"We have school districts in three or four different counties, so we wanted it a little more specific," he said.

Arkansas State Teachers Association Executive Director Michele Linch also praised what she called an "excellent" decision. The teachers association has not taken a position on whether schools should move to remote learning this fall.

"I breathed a sign of relief," she said. "It definitely needs to be local decisions with local data."

Linch said superintendents in neighboring school districts could work together to make decisions to benefit the region.

Carol Fleming, president of the Arkansas Education Association -- which has called for a virtual start of the school year rather than on-site instruction -- said any additional information is welcome but medical data still suggests that the risk of reopening schools remains unacceptably high.

"First and foremost, we welcome that partnership because that's going to provide us with additional medical data," Fleming said. "As we've been saying, we really need to weigh in on the advice of our medical experts when considering the reopening of our schools, and this will be an additional piece of the puzzle that will help in that decision making."

"Health officials have to be working with district-level data and district-level administrators to have an understanding of what the local risk levels are for the students, the educators and the greater community," she said.

Hutchinson said that during a call Monday with the White House Coronavirus Task Force and Vice President Mike Pence, he broached the subject of declining commercial testing lab production.

In addition to commercial labs, covid-19 tests in Arkansas are processed by the Department of Health and the University of Arkansas for Medical Sciences.

Even as the two agencies have increased their testing capacity over the course of the pandemic, a reduced number of tests being processed in commercial labs has left the state's testing capacity stagnant over the past month.

"They recited their communications with the different ... national laboratories, and that they have committed to increase their testing capacity" and turn-around times, Hutchinson said. "I believe you'll start seeing that in Arkansas."

One area of testing where the state has already increased its numbers is in antigen tests. As of Tuesday, 1,836 antigen tests have been performed in Arkansas this month, according to the Health Department.

But antigen tests, which produce quicker results than other kinds of tests, are also considered less reliable. For that reason, the Health Department does not include people who receive positive antigen tests in their publicly reported case numbers. However, those who test positive on antigen tests are referred for more comprehensive testing.

A group of governors, including Hutchinson, is requesting a half-trillion dollars in aid for their states.

In a joint statement Monday, National Governors Association chairman Mario Cuomo of New York along with Hutchinson, the group's vice chairman, urged members of the nation's legislative and executive branches to work together for the good of the nation.

"We appreciate the White House's proposals to provide additional solutions to address economic challenges; however, we are concerned about the significant administrative burdens and costs this latest action would place on the states," it said.

"The best way forward is for the Congress and the Administration to get back to the negotiating table and come up with a workable solution, which should provide meaningful additional relief for American families." it stated.

"NGA has requested $500 billion in unrestricted state aid and NGA continues to urge Congress and the White House to reach a quick resolution to provide immediate assistance to unemployed Americans. This resolution should avoid new administrative and fiscal burdens on states. It is essential that our federal partners work together to find common ground to help restore our nation's health and protect our economy," it said.

Cuomo, a Democrat, was elected as National Governors Association chairman at its virtual summer meeting on Aug. 5; Hutchinson, a Republican, became vice chairman the same day.

The Health Department releases a daily list showing which facilities with large populations, such as nursing homes, prisons and jails, have had cases of covid-19 among residents and staff members. The categories of information provided in the list have evolved since the beginning of the pandemic. The most recent version shows when new cases are added to the list, but omits numbers of deaths.

"Those deaths reflected information reported directly by nursing homes, and that sometimes led to discrepancies when compared to our overall data," Lesnick said. "We're working to develop a better system while also producing the daily report."

The list released Tuesday night, for example, showed the following facilities with at least 10 more cases than the previous day's report showed:

• Dierks Health & Rehab Center, in Dierks in Howard County, had 41 patients with positive test results, with the most recent 16 cases added Aug. 5. Four staff members who tested positive were added the same day, for a total of 14.

• The state Department of Corrections' Grimes Unit, in Newport in Jackson County, saw 35 new cases added Tuesday to its total of 41 coronavirus cases. Employees who tested positive totaled six, with one added Tuesday.

• The Arkansas State Hospital's list of coronavirus cases was updated July 31, adding 15 cases among residents for a total of 48, and adding 31 employees for a total of 84.

• The Arkansas Department of Human Services' Booneville Human Development Center in Logan County now has 51 residents who tested positive, after 13 were added Tuesday. Among staff members, 45 employees were added to the list Tuesday, for a total of 60.

• The Greene County jail in Paragould had no virus cases until Tuesday, when 19 inmates were recorded as testing positive. No staff members were on the list.

• At the Corrections Department's Ouachita River Unit in Malvern, 18 inmates were added Tuesday to the positive list, which now totals 1,277. There were no new cases among employees, who had seen 48 cases of infection.

NOT 'ALLOWED TO SEE HIM'

He was admitted to the hospital on July 14 where he tested positive for covid-19, his wife, Rose Copeland, said.

"He went to the emergency room because he thought something was wrong, and they sent him home," Rose Copeland said. He went back the next day, and they kept him for observation. That's when they tested him."

The couple had been married for 49 years.

He had a history of dementia and hypertension, according to the coroner's report.

Curtis Copeland had three daughters, a son and eight grandchildren, his wife said. His son died in October.

"We weren't allowed to see him after he went to the hospital," Rose Copeland said. "They called me on the telephone to tell me that he had died. He was in respiratory distress because of the covid. Nobody in the family was able to see him."

Rose Copeland said her husband retired after 20 years to take care of his elderly mother. He worked at International Paper Co. in Pine Bluff where he was a dryer feeder.

He liked to joke, and he was devoted to his grandchildren, attending every ball game and being involved in their lives.

"I have a 10-year-old grandson that didn't get to tell his grandpa goodbye," Rose Copeland said. "I was pretty mad at first. I think they should put them [covid patients] in a room by themselves. The family can wear masks, gowns and everything as long as they can see them and say goodbye." 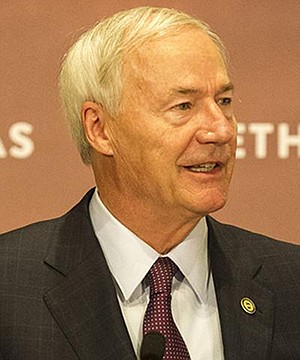 Photo by Stephen Swofford
Gov. Asa Hutchinson said Tuesday that despite the drop in tests reported, “we still had a good day.” More photos at arkansasonline.com/812gov/. (Arkansas Democrat-Gazette/ Stephen Swofford) 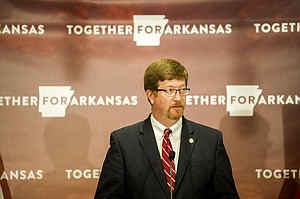