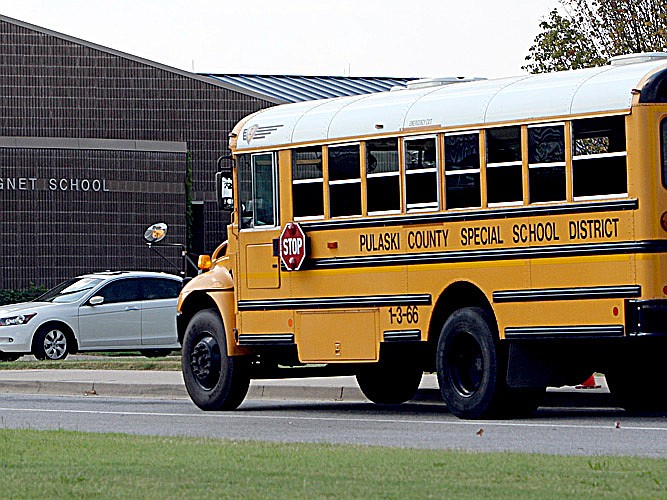 Leaders of the Pulaski County Special School District on Thursday raised the possibility of having to construct a replacement competition gymnasium at the new Mills High School campus, which opened in 2018.

Speaking to the district's School Board, Curtis Johnson, the district's executive director of operations, reported that a replacement gymnasium would cost as much as $12 million.

That's an amount Superintendent Charles McNulty said the district does not have on hand.

Johnson's comments about a new gymnasium, along with the construction of a softball field and space for the school's Driven online instructional program, come as the district waits for a decision from a federal judge on whether the district has met its desegregation obligations, and can be declared unitary and released from further court monitoring of its operations.

In the hearing, attorneys for Black students who are known as the McClendon intervenors challenged the district's compliance in the different areas. That included complaints that the construction of Mills High in a more racially diverse area of the district is inferior to that of Robinson Middle School in the predominantly white and more affluent western edge of the district. Robinson and Mills were built at the same time.

Some of the differences in the two schools that were highlighted during the court hearing were the masonry walls at Robinson versus gypsum board hallways at Mills, the arena-style gym at Robinson versus the traditional gymnasium at Mills that is not large enough to host state basketball tournaments, and there is dedicated space for the Driven self-paced student online instruction program at Robinson but not at Mills.

At a follow-up tour of Mills, Marshall also examined the Mills' large-space seminar room that was used this past year for family consumer science classes and the choir room that housed the district's Reserve Officers Training Corps program. The ROTC program will be housed this year in a separate building behind the Mills school that has been "re-habbed," Johnson said, but will eventually be demolished.

Johnson made brief reference to "the litigation."

"I'm not sure what is going to happen as it relates to the competition gym," he said. "I envision that we will probably have to build another one -- that's the way this seems to be going -- maybe, maybe not. You still have a girls' softball field and you still have the Driven program."

"Those are the three I'm anticipating, just so everybody hears it," Johnson said.

The school's current competition gymnasium could possibly become the school's auxiliary or practice gym, Johnson said, and the current practice gym at the campus could become additional classroom space at the school on East Dixon Road in the southeast part of the 12,000-student district.

After the court hearing, Marshall and attorneys for the district and the McClendon intervenors not only visited Mills but also the newly expanded Sylvan Hills High School complex in the Sherwood section of the district.

Marshall had visited both sites, as well as the Robinson Middle School, previously in 2018.