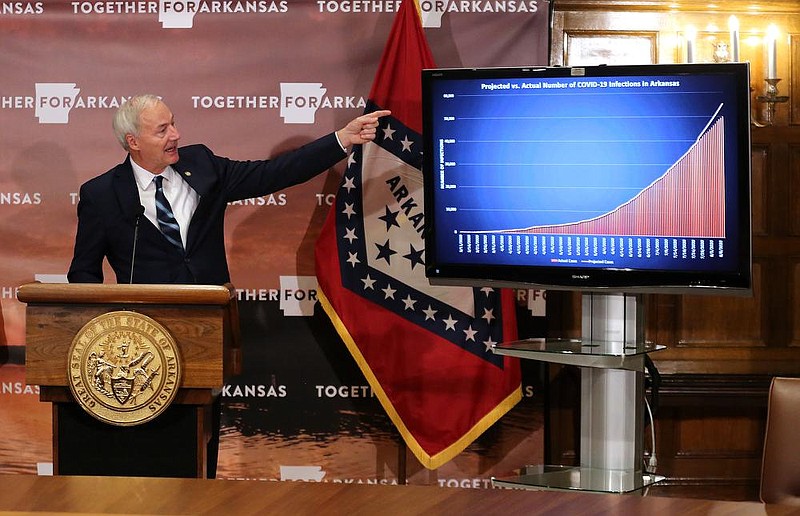 Gov. Asa Hutchinson shows a chart comparing the number of cases to the projected number to date during the daily covid-19 briefing on Monday, Aug. 10, 2020, at the state Capitol in Little Rock. - Photo by Thomas Metthe

Arkansas surpassed 50,000 cases of covid-19 on Monday, a benchmark that Gov. Asa Hutchinson said was the result of an unacceptably high plateau of infections over the past month.

The first confirmed case of the novel coronavirus in the state came five months ago today, on March 11. The state reached 25,000 cases on July 8, and the number since then has doubled as daily case counts numbered in the hundreds, while peaking at more than 1,000 on some days.

On Monday, the state Department of Health recorded 645 new cases of the virus, bringing the cumulative total to 50,028.

Hospitalizations for the virus, meanwhile, fell by six, to 508. There were 11 new deaths reported Monday, bringing the toll to 555.

[Video not showing up above? Click here to watch » https://www.youtube.com/watch?v=rFAdPsYbTP0]

Of the total cases in the state, 7,343 were considered active, close to the high recorded earlier in Arkansas.

Reflecting on those numbers, Hutchinson noted successes the state has had in "managing" the virus's spread to keep hospitals from being overwhelmed with patients as well as in falling short of projections that showed Arkansas with a higher number of cases at this point in August.

The governor also said that the statewide mask mandate that he ordered in July was beginning to have an effect, as evidenced by a drop in new cases last week. Still, he said, the number of positive tests being reported to the Health Department is too high.

Despite the acceleration in new cases over the past month, Hutchinson on Monday reiterated his commitment to opening schools during the week of Aug. 24 and having a college football season played this fall. If infections start to rise above 1,000 a day or if a new outbreak occurs, Hutchinson said, he will consider taking further steps to limit the movement of people in affected places.

"We don't want to do that. We don't want to have to go back, and the way you avoid that is to do what [Health Secretary Jose Romero] and the public health team is asking everybody to do," Hutchinson said.

The governor began his near-daily news conference Monday by addressing a series of executive orders and memorandums issued by President Donald Trump over the weekend, including one that proposed to extend $300 in weekly unemployment assistance for the near future, with the states kicking in an additional $100 in benefits.

"I believe the president is simply doing his best to get the money to citizens of the United States that are in great need," Hutchinson said, later adding, "The best solution is for Congress to reach an agreement."

Mike Preston, the state's secretary of commerce, said 120,000 Arkansans receive unemployment assistance. That number includes those on traditional unemployment and those who have been left out of work because of the pandemic.

The state's projected share of the costs to extend benefits to those people is $265 million, the governor said. Such as appropriation, the governor added, would have to be approved by lawmakers, which he suggested would set an "unpredictable time frame."

"If the state has to put up 25%, the state of Arkansas can make that happen, but it would be challenging and it would take some time," the governor said.

Hutchinson said he would like to receive more information from Trump's administration before committing to covering a quarter of the costs if Congress does not reach an agreement on a coronavirus relief package.

Hutchinson said on Monday that he had only spoken with University of Arkansas, Fayetteville, Athletic Director Hunter Yurachek about the upcoming college football season and did not have any other "inside information" into the possibility that major conferences, including the Southeastern Conference, could cancel the season.

The governor was clear that it was his desire to see the season go forward, saying that he was "comfortable" with health guidelines put in place for players, coaches and fans.

"No, I don't think they should cancel the college football season," the governor said.

Commissioners from the Power Five Division I college football conferences met Sunday to discuss concerns about the season, The Associated Press reported, but no decisions were made about whether to continue with the games.

Of the 645 new cases reported by the Health Department on Monday, 13 came from correctional facilities, Romero said.