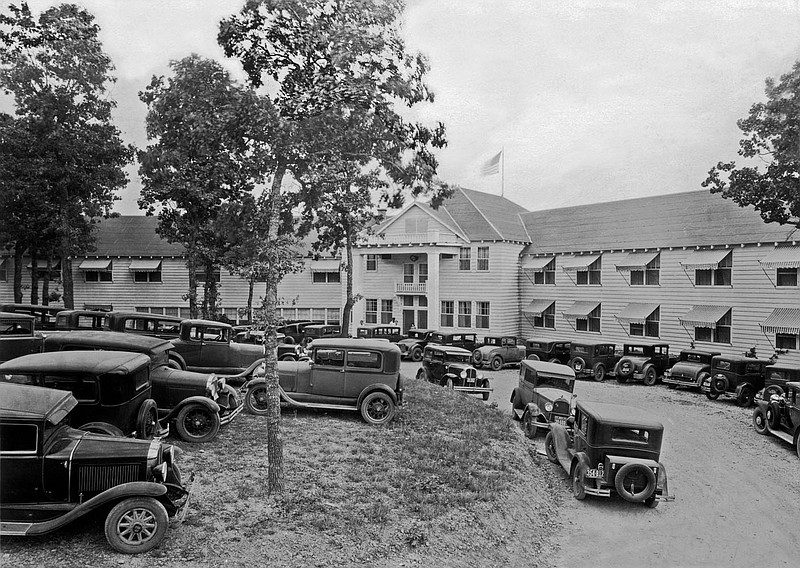 BELLA VISTA -- The Sunset Hotel was built by the Linebarger Brothers and opened in 1929 on Sunset Mountain above what is now U.S. 71 across from Lake Bella Vista.

A very fancy hotel for its time, with private bathrooms for its 65 rooms or suites, it was sold by the Linebarger Brothers along with the rest of the Lake Bella Vista Summer Resort to E.L. Keith in 1952.

Keith did major repairs on the hotel, including a new roof, but had few customers, so he decided to let the Baptist Institute of the Ozarks use it rent-free as a school. He put in a heating plant for them since it hadn't been used year-round before, and had only fireplaces. He was going to give the building to them if they could make a success of the school, but lacking enough money and students, the school closed in 1959 after only a few years.

In 1960, Tex Newman of Oklahoma City leased the Sunset from Keith, with an option to buy, and opened it for business with a partner, Audrey Robbins Schweiger.

While the hotel and its restaurant drew enough business to pay operating expenses, it failed to make a profit, so Newman turned it back over to Keith in 1963, and it was never again operated as a hotel.

When John Cooper Sr. bought the entire resort from Keith in 1963, the sale included the Sunset Hotel. Cooper held a press conference in July 1965, announcing the restoration of the building. After remodeling it, he opened it as an office building for his company.

Renamed Village Hall, it held the sales and marketing departments of Cooper Communities Inc., some offices of the Property Owners Association and the Weekly Vista newspaper. The building was listed on the National Register of Historic Places in 1991 but was emptied in 1992 when all the offices were moved to Town Center and Cooper put it up for sale.

From that point on, Village Hall remained vacant and became an attraction for vandals. In August 1996, three teenagers were arrested for vandalism, but that stopped the vandalism for only a short time.

Finally in June 1997, after deals with two other prospective buyers had fallen through, the Sunset was sold for $250,000 to two men from California, Larry Wilson and William Mitchell, who had purchased Wonderland Cave from the Linebarger granddaughters in 1996. Wilson's brother, who lived in Searcy, read about the Cave being for sale and told his brother, who then saw the Sunset Hotel on the market when he came for a visit.

Wilson bought out his partner, Mitchell, in December 1998 but did not proceed to develop the property, so the hotel continued to remain vacant and therefore a magnet for vandals.

Three more teenage vandals from Bentonville were arrested in August 1997. In September, Wilson hired Tony King as a caretaker and guard for the Sunset (and Wonderland Cave), who reported broken windows, destroyed ironwork, damage to the hotel's ceiling and theft of a marble countertop.

On the afternoon of Feb. 6, 1999, a teenager from Fayetteville set fire to it and caused damage but did not totally destroy the building. He was arrested, smelling of gasoline, when he returned to retrieve his camera that he had left in the building.

Unfortunately, another vandal tried again during the night of July 1-2, 1999, and was successful in burning the former Sunset Hotel to the ground. The fire was determined to be arson-caused since there was no electricity in the building by then, and no lightning storm at the time. That vandal was never caught. A few months before the fire, Lloyd's of London had canceled the insurance, saying Wilson hadn't been able to secure the building and keep vandals out.

Wilson announced plans to rebuild, utilizing the old foundation, and making it look very much like the original hotel. Instead, in late October 1999, he put the 15 acres of land back on the market for a price of $3 million, and then in December 2000, he sold the land to Wonderland Sunset Properties for a dollar.

That company consisted of Wilson and his partner, California lawyer Tim Lambirth. They said the company planned to develop both the hotel property and the Wonderland Cave property. In November 2001, Lambirth announced a $60 million project to develop the two properties, including plans to build a 150-room hotel on the Sunset site.

But in June 2003, the life insurance company that had loaned Wilson money for the Sunset property was awarded a foreclosure decree against Wilson, Lambirth and their third partner, John Robert Smith, due to outstanding debt. Wilson said that 9/11 hurt the investor economy and he couldn't proceed with the development of both the Sunset Hotel property and the Wonderland Cave, so he would give up the Sunset property.

The owners were given the option to pay the outstanding debt and prevent the auction, which was scheduled for June 25, 2003. Wilson then filed for bankruptcy, which stopped that auction, but that bankruptcy filing and a later one were voluntarily dismissed, allowing lenders to proceed with foreclosing on the property, which had been appraised in 2002 for more than $3 million as a hotel site.

Another auction was scheduled, which Smith listed on eBay in hopes of attracting more bidders (but did not), and it took place on April 8, 2004. The winning bidder was Cooper Communities at $575,000. Cooper Communities said it hoped to develop the Sunset property but had no firm ideas in mind.

The property was recently put back on the market.