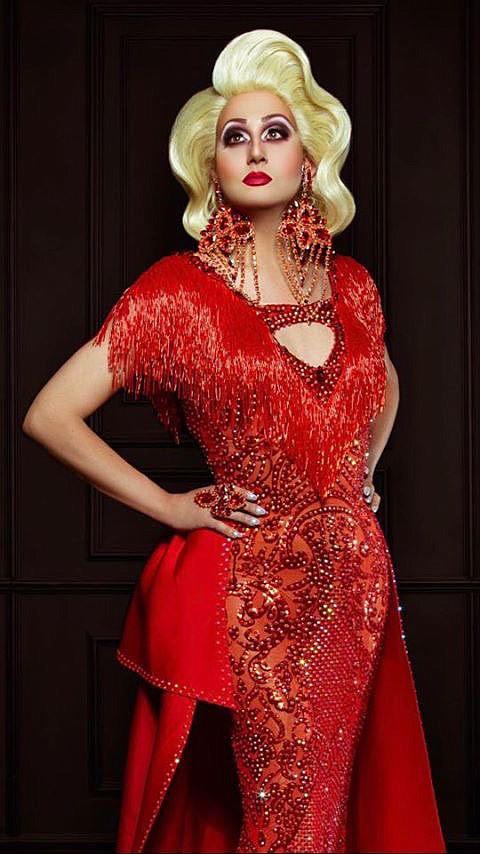 Taylor Madison Monroe is “a hoot and a half. She is the life of the party,” says her alter-ego and creator, Jeremy Reid Stuthard. (Courtesy Photo/Carrie Strong)

It is a fact that in Shakespeare’s day, the roles of women in theatrical productions were played by men. Whether those men were “in drag” depends on the perspective of modern drag performers.

Stuthard, a graduate student at the University of Arkansas, was making his living performing as his drag alter-ego, Taylor Madison Monroe, until the coronavirus hit Northwest Arkansas.

“I have been presenting the illusion of Taylor Madison Monroe since 2003,” he says. “I find female impersonation/ gender illusion/drag to be an artform. It really is amazing how I take an average looking male and transform into a Barbie doll-esque figure with the help of makeup, wigs, padding and costume!

“I enjoy doing drag because it is a character that I get to dream up,” he explains. “Taylor has always been a figment of Jeremy’s imagination, and Taylor can be anything she wants to be. She is larger than life. I also do drag because it is an artistic release for me. Even though we lip sync, as drag queens, the presentation of a song is interpreted differently by each performer. Whatever I am performing, I hope to bring some sort of emotion to the audience. I also hope they are always smiling.

“Traveling to perform in drag is a privilege,” Stuthard adds. “Being able to call Fayetteville my home is very special to me, but being able to travel and meet so many different people has allowed me to grow as an entertainer and make connections I never would have otherwise. I have done extensive traveling from Las Vegas to DC, but I mostly do shows in Arkansas, Oklahoma and Missouri right now, because of graduate school. I attend school during the week and travel on the weekends.

“I have done one in-person show since the pandemic, when I was used to working three or more shows a week,” he goes on. “This pandemic has been a struggle because the bars I perform at are not allowing live shows.”

But Stuthard and Jamie Wilson, the owner of C4 Nightclub & Lounge in Fayetteville, came up with a plan to stay in business during the coronavirus.

“We first thought of a virtual show after seeing many entertainers start going live on social media in their living room,” Stuthard explains. “We had the space to be able to put together a regular show and the technology to broadcast it.”

The club is observing safety protocols on site, he’s quick to stress.

“The shows are produced each Wednesday night at 8:30 p.m. and broadcast live on Facebook. Four performers are all together, with one DJ and the club owner. We social distance our makeup stations; we take temperatures when arriving; we make sure people wear masks when not performing. We take every precaution we can.”

Stuthard says drag shows are regularly attended by a broad cross-section of people, but “we felt we could possibly reach out to more people with a digital show. It really has been so much fun to put these on. I try to have a diverse group of entertainers. Creative choice is given to entertainers on what numbers they would like to perform, and we have had Broadway, comedy, rap, to Top 40 and everywhere in between.”

If you’ve never seen a drag show, Stuthard says “be ready for a TON of fun. Be ready to open your mind. Be ready to just live for the moment and enjoy. It may be lip syncing most of the time, but it is WAY harder than you think!”

COST — Free; the audience can tip performers through CashApp, Venmo or Paypal

FYI — All tips are divided equally among the entertainers.