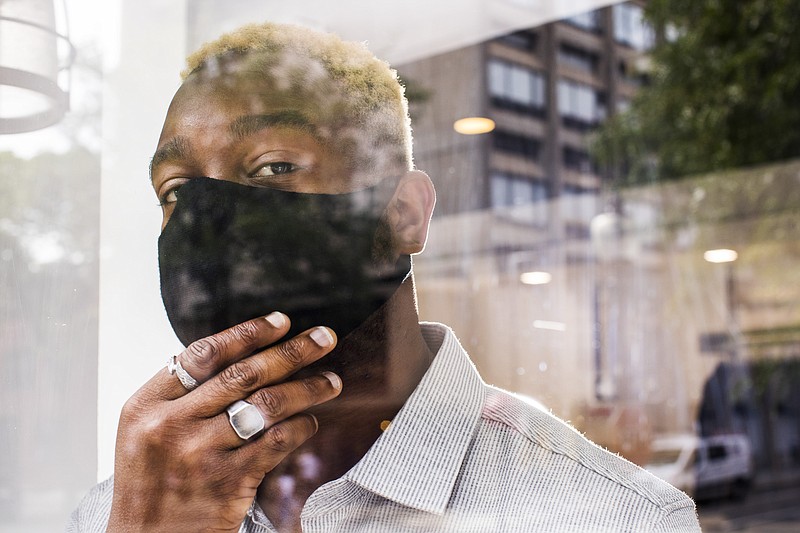 Oyedotun Ajewole of Ministry of Supply wears a mask created with a 3-D-printing machine. MUST CREDIT: photo for The Washington Post by Adam Glanzman.

For nearly a century, Steele Canvas has been churning out industrial goods from its workshops near Boston, lately housed in a brick factory in Chelsea, Mass.

The family-owned manufacturer built a booming business making canvas-and-steel storage carts that customers use to stash tools, construction materials and other wares.

As the economy started locking down in March, those orders dried up, pushing the company toward crisis and forcing it to consider furloughing its 70 employees. But then it found a way out -- making masks.

"It's become a very significant part of our business," said Ryan Huston, Steele's head of sales and marketing. "We were able to keep our whole staff 100% employed and even to hire some extra people."

With about half of U.S. states now requiring that masks be worn in public and most large retailers and grocery stores mandating them in their stores, masks are not just helping keep coronavirus at bay -- they are providing a financial lifeline to many small businesses that might otherwise be looking into the abyss.

Companies are stitching them on repurposed manufacturing lines in New England and 3-D-printing them at workshops in California. Hundreds of Etsy entrepreneurs have stopped sewing bags and table linens and switched to full-time mask production.

For many, the work started as a way to keep some money coming in as the economy crashed and to help their communities. Now, as coronavirus infections surge across the nation, some mask makers see potential for steady sales, at least for months to come.

Steele's carts have been a staple on factory floors since the business was founded in 1921. The television and film industry is also a big customer, using the bins to stash props and wardrobe items.

"They're always in the background in '30 Rock'," and in movie scenes where prisoners break free by hiding in laundry carts, says John Lordan, who along with his brother, Paul, bought the business from their now-retired father.

As Steele's business faltered this spring, the brothers faced tough choices. "Are we going to have to furlough everyone, including ourselves, and shut down till this thing blows over?," Paul Lordan remembers wondering. That idea went against the No. 1 instruction their father had given them, which was to always protect their workers' jobs.

At an emergency meeting, as the Lordans, Huston and others discussed what to do, an employee walked in wearing a mask. "We all looked at each other and thought, we have sewing machines here, can't we make masks?" said John Lordan.

Tony Oliveira, a production manager who oversees Steele's workshop in a onetime ice-cream-cone factory, watched a stream of YouTube videos to learn how to put a mask together, then drew a pattern and asked a colleague to make a prototype. A company in New Hampshire, North East Cutting Die, quickly made fabric-cutting dies to aid production.

Steele's first model had a denim exterior and a soft flannel layer next to the face. In early April, the company and the online retailer Food52 began offering the masks in a two-for-one deal for $20 -- buy one, donate one to a hospital or homeless shelter.

The workshop crew leaped to action but was initially able to make only 80 to 100 masks a day as everyone learned the steps. "We were almost panicking because that would not be enough," Oliveira said. Soon the pace quickened, and they were producing 1,200 a day.

Steele hired about six extra workers to help out, while the Lordans and Huston drove all over New England trying to source enough fabric and extra sewing machines -- no small feat during an economic shutdown. The retailer Crate and Barrel also started offering the masks, further driving demand.

Sales have softened since the peak, but 10 to 20% of Steele's workshop is still focused on masks, Huston said. The company recently added new models made of chambray, after a retailer asked for lighter-weight versions for the summer.

Now that the initial panic buying of masks has subsided, some businesses see an opportunity to draw customers with eye-catching styles.

Meghan Navoy, owner of Rosemarine Textiles in Detroit, dyes her own fabrics with the lavender and indigo she grows in her garden. While she initially churned out masks using whatever scraps she had left over from her other products, she is now specially tie-dying fabric for her masks.

"Now that everyone has one, people are buying them more for stylistic purposes," said Navoy, who sells her masks through her own site and on Etsy, the online marketplace.

Navoy recently hired an extra seamstress to help keep up with mask orders, which now account for 40% of her sales. A similar boom has driven entrepreneurs across Etsy. The website reported that 60,000 of its sellers were offering face masks in April, generating $133 million in sales that month, making it Etsy's second biggest category.

Navoy said she also admires the design aesthetic of Baggu, a reusable bag maker in San Francisco that has started selling masks. Baggu founder and chief executive Emily Sugihara said the company is known for its colorful patterns and wanted to offer similarly quirky masks to help leaven an otherwise grim health crisis.

Demand has been brisk, and Baggu is now working on additional patterns, Sugihara said.

Some manufacturers say a flood of supply has driven down prices and made the business less attractive in recent weeks. Pistol Lake, a clothing brand made in Los Angeles, started churning out masks from oxford cloth in March, in part to ease health care shortages. Doctors and nurses were buying them to wear over their medical-grade N95 respirators, to make the N95s last longer, said Ryan Light, chief executive.

But sales have dropped lately as cheaper imported masks, largely from Asia, take market share, Light said, and the company is not sure how long it will stay in the mask game.

"Because we pay our employees over minimum wage and we make everything in the U.S., our stuff is more expensive," he said. "Do people still want to pay $15 for an ethically manufactured one made out of organic and recycled materials or do people see it more like a sock? That's a debate we have going on internally."

In March, Ministry of Supply, a Boston-based clothing company, asked one of its contract manufacturers in southern California to switch from knitting sweaters to masks. The clothing company began donating the viscose-and-polyester face coverings to hospitals and homeless shelters and eventually started selling them in a buy-one-donate-one deal.

"We started selling tens of thousands. We were pretty shocked by it," said co-founder and chief executive Aman Advani. "There was a period when it was the majority of our business."

Despite being big sellers, the masks were not very profitable. The factory uses a high-tech machine that knits seamless garments in one piece, a technique Advani calls 3-D print-knitting.

It is a relatively expensive form of production, but Ministry of Supply likes it because it wastes very little material, making it environmentally friendly, Advani said. The machines can also be programmed to shape the knits to the curvature of the face, giving a better fit than a cut-and-sew mask would, he said.

Even if masks are not offering big profits, the company believes they have promotional value, drawing traffic to other items on Ministry of Supply's website. The retailer has also installed a 3-D knitting machine in its Boston store, with the aim of producing masks on demand for walk-in customers.

The masks have also helped give Ministry of Supply's 50 employees a sense of purpose at a tough time, Advani said. "Whether it is arming consumers or donating them, there is an emotional high that comes with that." 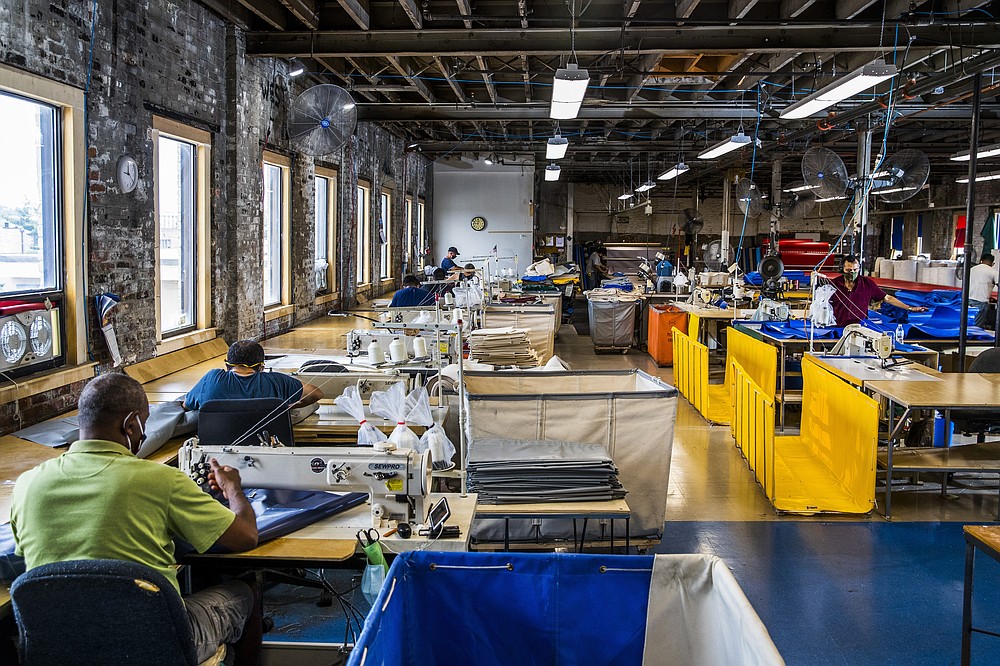 Workers process materials in the Steele Canvas factory in Chelsea, Mass. MUST CREDIT: photo for The Washington Post by Adam Glanzman. 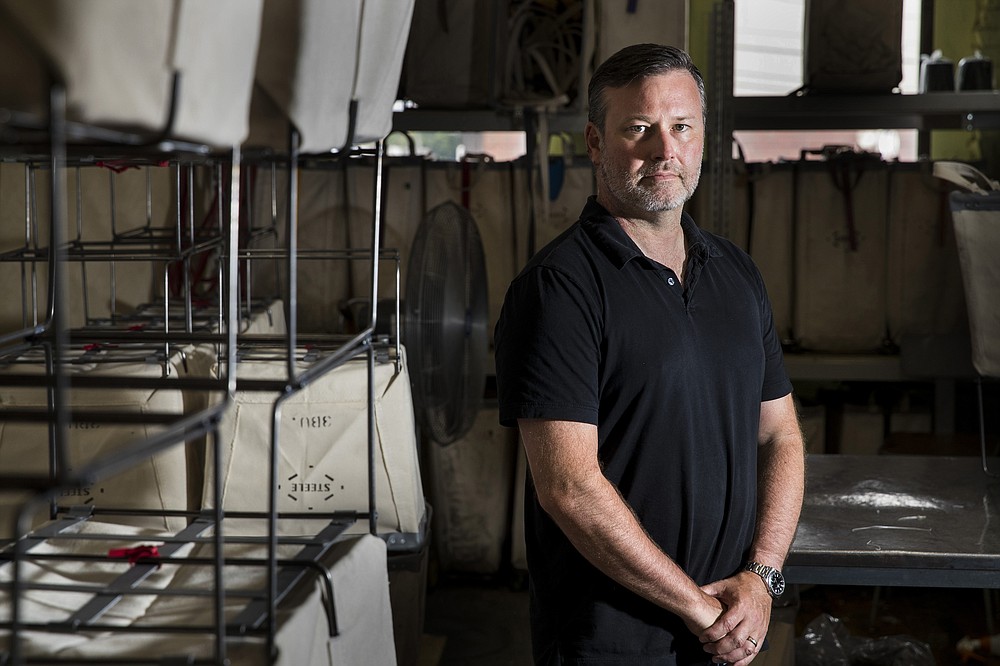 Co-owner of Steele Canvas John Lordan poses for a portrait in the factory in Chelsea, Mass. MUST CREDIT: photo for The Washington Post by Adam Glanzman.