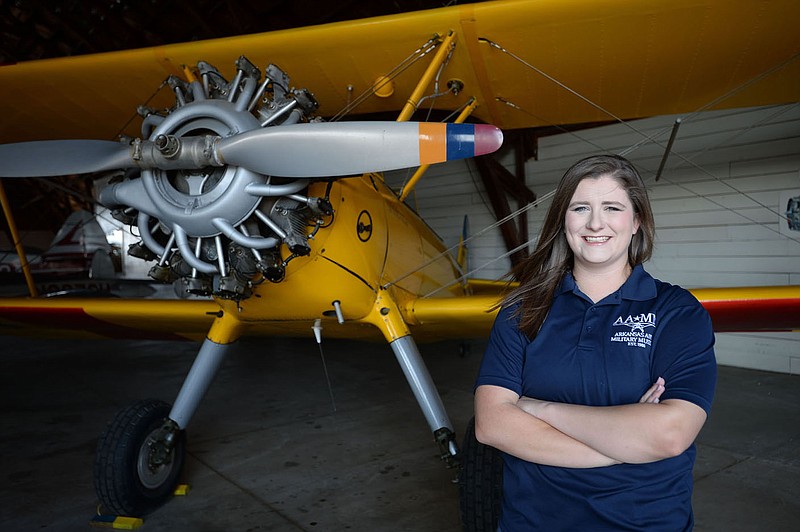 Laci Shuffield has lots of plans for the Arkansas Air & Military Museum, where she is the new director. Among them are bringing back “some of our old favorites like airshows, fly-ins, car shows and discovery flights,” improving flight simulators, building a concrete pad for the museum’s C-130 and adding more touch screen technology for exhibits. (NWA Democrat-Gazette/Andy Shupe)

There’s a new face at the Arkansas Air & Military Museum — and she’s just announced new opportunities to meet her and see what’s new at the “white hangar.”

Laci M. Shuffield, the museum’s new director, is originally from Malvern and was the inaugural graduate of the Museum Studies Program at Henderson State University.

“Growing up, I was always infatuated with Amelia Earhart, but I do not think she was my soul motivator,” she says, explaining how she ended up at an air museum. “I actually started out in college as a pre-veterinary biology major and absolutely hated it, but while being in that major I got the opportunity to be a teacher’s assistant for a biology lab and just fell in love with getting to teach. So I switched to history with full intentions to work for the state parks. Shortly after that I got an internship at the Old State House Museum in Little Rock, and I really think that’s where I found my true passion. Getting to see someone’s eyes light up when they learn something new or make a new connection is so fulfilling.”

That love for teaching and desire to connect shaped Shuffield’s first big undertaking at the museum in south Fayetteville — a new educational series called “Taxiway Talks.” The next one, “The Basics of Jet Engines,” is set for 9 a.m. Aug. 22.

“I personally cannot speak to the museum’s education programming past, but our future is looking very different,” she says. “My goal for our education is to reach all ages and not just a specific group. I want someone who has never even been on a plane or in the military to leave here not confused or lost but informed and excited about the topics.

“With our upcoming Taxiway Talks, I am hoping to bring in a variety of guest speakers, and I have briefed these speakers on the fact that we do not know what our crowd will look like on a given date,” she explains. “That crowd could contain a Vietnam veteran, an airline captain and an 8-year-old child, and I want all of the attendees to learn something but not leave bored or confused. We are also hoping to focus more on K-12 education, so the world of aviation and military doesn’t seem so ‘other worldly.’”

Shuffield says although the museum closed down with everything else in March, she soon realized she had a unique opportunity.

“We’re in a large airplane hangar, so we can stay socially distanced very easily,” she says. “Also, a majority of our airplanes are still airworthy, so we already do not allow touching.”

Shuffield says she’s taken all the covid-19 precautions — masks, disinfecting the museum as a whole every afternoon and the bathrooms after every use, having staff assist museum shop patrons so merchandise isn’t handled — and “on top of all that we have started working on getting ready for the coming school year. We have become more prepared to do virtual field trips and are being sure to post more of our educational events online.

“Teachers can contact me directly so I can coordinate the right team for their age group,” she says. “We will work with every group to fit their needs.”

The museum is also scheduling visits on its website, and Shuffield says “if a walk-in shows up at the same time as your appointment, we will space the groups out by having one group go backwards on the tour with their tour guide.” That being said, she adds she has “tons of volunteer opportunities! We are always looking for more tour guides and people to help with daily operations. Right now the biggest burden staff-wise is our disinfecting at the end of the day. We like to do it right so we spend quite a bit of time on that.

“We will also work with high school age and college students on paid and unpaid internships,” she adds. “All you have to do is swing by and fill out a volunteer form.”