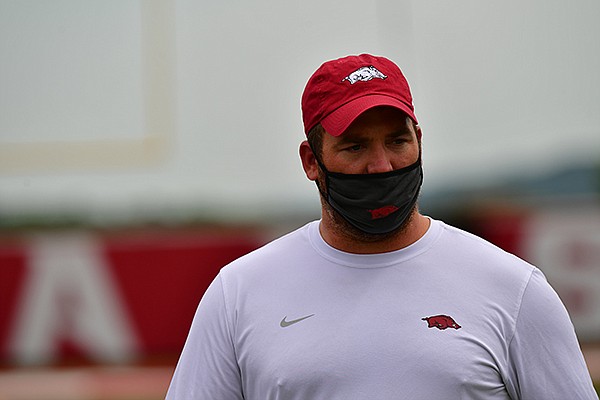 Arkansas tight ends coach Jon Cooper is shown during a July 2020 workout in Fayetteville. Face coverings like the one showed here will be required on the sidelines during football games this season to be in compliance with SEC playing protocols. - Photo by Walt Beazley, Arkansas Razorbacks

FAYETTEVILLE — The SEC will require football players to be tested at least twice each game week during the upcoming season.

That is among multiple protocols related to covid-19 that were announced by the SEC on Friday. In a news release, the conference said it made the decision in consultation with a 14-member medical task force that was assembled in April.

Football players and anyone in close contact with the team will typically be tested six days and three days prior to scheduled games. The league's medical task force recommends exploring ways to conduct a third test with a rapid response closer to the time of a game.

Game officials will be tested once each week.

The SEC will use a third party to conduct the testing. According to the task force, team medical personnel must have "unchallengeable autonomous authority" related to determine when players can return to play, consistent with NCAA rules.

"We recognize that there is no way to eliminate the risk of transmission of the virus at this time," the task force wrote in a 12-page document outlining protocols. "These standards are intended to increase the likelihood of early identification and help mitigate the potential impact of the virus.

"These requirements are based on currently available information. Given the fluid nature of this pandemic, the requirements and testing strategies within are likely to change and will be updated as information evolves. This plan is based on risk mitigation strategies and is contingent upon supply chain availability."

Any team personnel who tests positive for the virus will be required to be quarantined for 14 days. Players will be allowed to return to play if no symptoms are developed during their quarantine.

The SEC medical task force notes contact tracing is an area of emerging research and guidelines might need to be adjusted.

Coaches and other non-competing personnel, including players, will be required to wear face coverings on the sidelines. Football sideline boxes are expected to expand from 50 yards to 70 yards this year to create more distancing opportunities.

Officials will be required to wear face coverings when distancing cannot be achieved. That mandate excludes during active play.

Teams will be expected to have "isolation rooms" dedicated for players who exhibit coronavirus-like symptoms during competition.

Games could be canceled for any of the following reasons:

• Unavailability or inability to perform symptomatic, surveillance or pre-competition testing when warranted.

• Local public health officials indicate an inability for the hospital infrastructure to accommodate a surge in covid-19 related hospitalizations.

The SEC also announced protocols for other fall sports Friday. Notably, cross country runners will be required to wear a face covering at the starting line and will not be allowed to remove the covering until they are at least 800 meters from the starting line.