Schools will open all week in North Little Rock 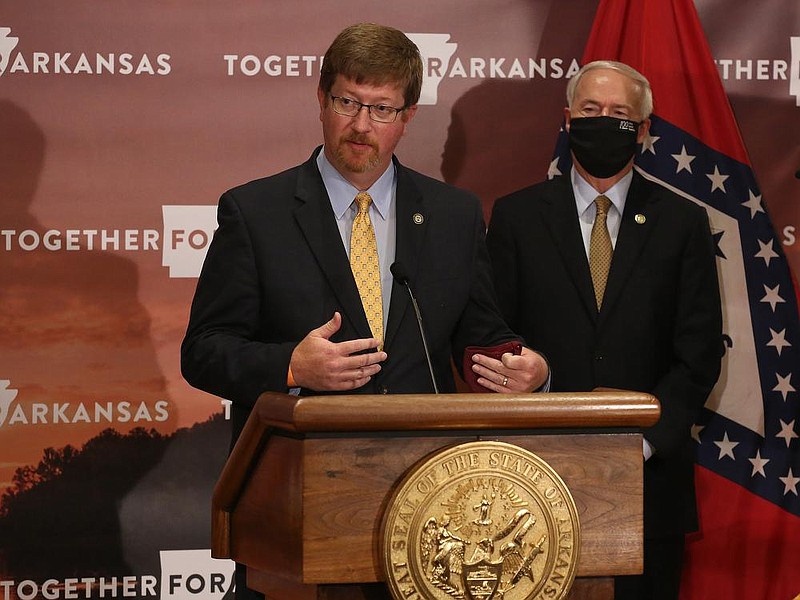 Arkansas Secretary of Education Johnny Key (left) answers a question while Gov. Asa Hutchinson listens during the daily covid-19 press briefing on Wednesday, Aug. 5, 2020, at the state Capitol in Little Rock. Key said Wednesday that because of the Arkansas Constitution's requirement for the state to offer students an adequate education, all districts must offer in-person classes, five days a week, in the fall of 2020.

The North Little Rock School District will move forward with a traditional five-days-a-week on-site option and a virtual academy after school officials said the district couldn't afford to defy state guidelines for the coming school year.

The School Board voted unanimously Thursday night to approve the proposal. The on-site option will be blended learning that will incorporate Google Classroom in live settings to prepare students in case at some point classes have to go all virtual because of coronavirus concerns.

Superintendent Keith McGee told board members a proposal for the school district to go to an alternate-days attendance plan was scrapped after comments made Wednesday by Arkansas Education Secretary Johnny Key during Gov. Asa Hutchinson's daily coronavirus news briefing.

Key said it had become necessary to clarify that the state's public school systems are to provide the opportunity for in-school instruction five days a week. He said school systems can add options to that, such as 100 percent virtual instruction or an option where students would attend in-school classes two days a week and attend classes online the remaining three days.

Because of the clarification, McGee said he could present only a proposal that would include a virtual academy option and a five-days-a-week on-site option.

"We consulted our attorneys, and we can only do what we have been advised," McGee said Thursday. "There can be consequences if we don't follow the directive, and the governor said there will be consequences. I know there are concerns, and my heart goes out to everyone."

School Board member Natalie Wankum asked McGee what would happen if the school district ignored Hutchinson's recommendations and proceeded with the alternate-day schedule.

McGee said the governor has the ability to sanction the district, withhold funds, remove the School Board and remove credentials. He said the school district is not in a strong enough financial position to ignore state guidelines and risk losing federal funding.

There will be a standard operating procedure for each grade level. That includes details about arrivals and dismissals for students and how potential covid cases will be handled.

McGee said general safety precautions throughout the day will include hand sanitizer stations installed throughout the school building, limited sharing of supplies between students, and the possibility of physical barriers being installed where social distancing is not possible.

LeAnn Alexander, director of special services at the school district, said there will be special education teachers on-site and available through the virtual academy this school year. She said the school district will not send staff to anyone's home.

McGee said the district is asking parents to check their children's temperature each day before school in addition to the screening the students will receive at school. He said anyone with a temperature of 100.4 degrees or higher will not be allowed on school grounds.

Temperatures will be taken once students arrive on the school grounds, not before they get on the bus.

McGee said taking temperatures before students get on the bus would create serious delays and that the outside air wouldn't allow for an accurate reading. He also said the district couldn't leave children at a bus stop because of liability issues.

Board President Dorothy Williams said that regardless of the time it would take, she still wanted bus drivers to take students' temperatures and to have a roster of parents' phone numbers in case a student tested positive at the bus stop.

"It's a pandemic. I don't care how long it takes as long as they are tested," she said. "My concern is for every bus driver, every child and everybody. These are scary times."

McGee said he would take the idea under consideration.

Social distancing on uses will be a challenge, McGee said, noting that if it were enforced only 15 students could ride a bus at the same time.

A potential partnership with Rock Region Metro was brought up as a possible solution that would allow social distancing on buses, but board member Lizbeth Huggins expressed concern about liability issues. 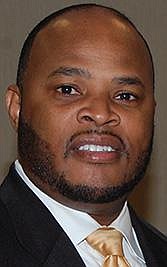 Keith McGee is shown in this file photo.
ADVERTISEMENT