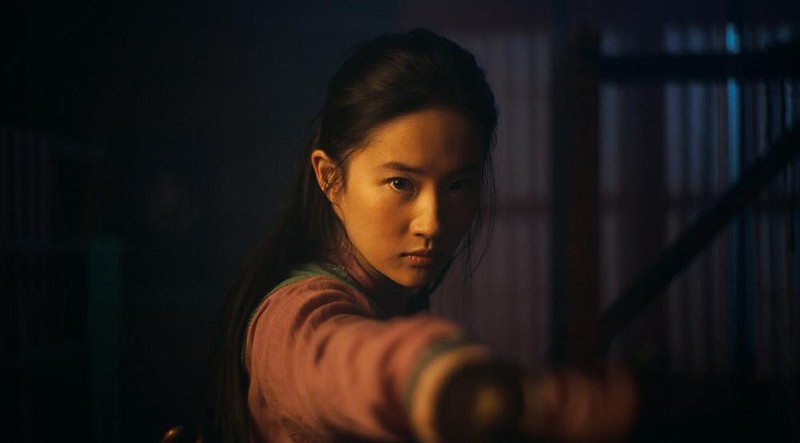 Yifei Liu stars as the title character in the live-action remake of “Mulan.” Last week the Walt Disney Co. announced that the film is no longer headed for a major theatrical release, but will debut on its live-action blockbuster on its subscription streaming service, Disney+, on Sept. 4. Customers will have to pay an additional $29.99 on top of the cost of the monthly subscription to rent it.

It's another quiet week in the land where time stands still due to covid-19 and with most theaters still being closed. Yet this was the week Disney decided to make a fairly big movie announcement.

Two movies have been bouncing around like pingpong balls on the release schedule since all this pandemic mess started. They are Warner Bros.' "Tenet" and Disney's "Mulan" remake. Back when there were still a few ounces of optimism left that America could handle this virus, folks predicted those two movies would revive the second half of summer blockbuster season.

Movie theater chains like AMC and Regal were just trying their darn best to hang on for dear life until these new movies could pump blood back into their industry, but a sizable portion of this country couldn't be bothered to do simple things like wear a mask and social distance. So here we are. The theaters are still mostly closed, and "Tenet" and "Mulan" were both yanked from their schedules indefinitely.

I've been screaming at Warner Bros. on Twitter for months now to just go ahead and release "Tenet" digitally. It's foolish to withhold the film just for the small subset of people who "want the pure theater experience." I've chided Disney twice as hard because the company owns a streaming platform of more than 60 million subscribers where it could release "Mulan."

That's when the news came down Tuesday that Disney would do exactly that. At first, I was excited for this news.

Disney's live-action remakes have ranged from garbage ("The Lion King") to subpar at best ("Aladdin"). None needs to exist. They're all easy cash cows I will repeatedly rake Disney over the coals for continuing to make. But "Mulan" is one animated movie I think will translate well into a live-action remake.

"So," I thought for exactly five seconds, "Bring on 'Mulan.' I'm happy to watch it on Disney+." And then I read the rest of the story. Here's a tidbit from Variety:

"Unlike the rest of the content available on Disney+, 'Mulan' won't be available directly to subscribers. Consumers in the U.S. and other territories will have to pay $29.99 to rent the movie on top of the streaming service's monthly subscription fee of $6.99. In markets where Disney+ isn't available, 'Mulan' will play in cinemas."

That's right. You have to pay money on top of the money you're already paying Disney to watch this one movie. And it's not like you're going to own the movie forever. If you cancel your Disney+ subscription, I'm thinking the House of Mouse ain't gonna be too keen on letting you keep "Mulan."

It's not the digital release I'm criticizing. Lord knows I think all movie studios should look at 2020 as a fluke lemon that needs to be made into lemonade. Every movie that was supposed to be released in theaters this year should have been released onto digital services like Amazon and iTunes for rental and purchase at the time of their original release date.

By now, I should have gotten to see "Tenet," "Black Widow," "Wonder Woman 1984" and "Top Gun: Maverick," in my living room. Every one of those movies should have come at a price point of $19.99 to purchase and $9.99 for a 48-hour digital rental. But studios and theaters have resisted making that choice available to customers for the most part.

In April, Universal released "Trolls: World Tour," straight to digital platforms and ended up making $77 million in revenue pretty quick, according to The Wall Street Journal. And it made that money without charging $30.

There's the rub. All movies that were scheduled to release during the pandemic should be released digitally on their original dates. But prices should be reasonable for consumers.

Disney isn't releasing this movie onto all platforms (probably because the company doesn't want to share its profits with Apple or Amazon), thus restricting choice and hurting customers. To add insult to injury, the House of Mouse saw fit to add an additional $10 onto the price of the movie above what other studios typically charge.

TONE IT DOWN A BIT

The price point is too extreme. It's so extreme, even the '90s are asking the price to tone it down a bit. And that's the most extreme decade of the 20th century.

Look, Disney, when new movies release onto digital platforms for purchase, the set price is about $19.99. That's what consumers like. That's what we're willing to pay. If this movie was coming out on Blu-ray tomorrow it probably wouldn't be $30. And at least with a Blu-ray disc, I'd have the added benefit of owning the movie to watch whenever I wanted.

It's like if I gave Disney directions to my home, and I said, "Make two left turns." Then the company ended up making three lefts. Bypass closed theaters and release the film digitally? Good. Put the movie on Disney+? Good. Charge $30 on top of the monthly subscription? Stop! Go back! You went too far.

Even if I was going to watch this movie in theaters, I wouldn't pay $30. My wife and I could drive to the AMC Theater here in Fayetteville, walk up to the window, and pay $20 to see "Mulan" on opening night. Then we get the added benefit of seeing it on a big screen.

Here, I'd be paying $37 (if you include my monthly subscription) for the "privilege" of seeing "Mulan" on my own television screen. In what universe does that math add up to my benefit?

I've seen people on Twitter making the argument that with a family of four, $30 comes out to $7.50 a person and is actually cheaper than most movie theater prices. The problem with that is it royally screws over single folks who want to watch "Mulan."

AT THIS PRICE POINT

In a time when millions of Americans have lost their jobs, and Congress allowed expanded federal unemployment benefits to expire, it's asinine for Disney to announce "Mulan" at this price point.

Disney spent $200 million making "Mulan." That's a pretty penny, so I understand Disney's eagerness to make that money back. But there's no way we could have known back in 2019 that a pandemic would strike and devastate the summer movie season in 2020.

Disney did its little dance of rescheduling and delaying and shuffling dates, trying to stick the landing on a successful theatrical release. But eight months into a pretty awful year, it's time to face facts. Movies aren't going to make tons of money this year, but fans who are stuck at home and stressed from living in a pandemic don't deserve to have films they've eagerly anticipated delayed any further. And they shouldn't be asked to pay $37 for one single movie.

I'm not asking Disney to just dump "Mulan" onto its streaming service and eat a $200 million loss (though that wouldn't even come close to bankrupting the multi-billion dollar giant). What I do want is for the House of Mouse to think of consumers and play ball. That means releasing the movie on all digital services for a fair price of $19.99.

There are already enough reasons to skip "Mulan," such as lead actress Liu Yifei tweeting support for police brutality against Hong Kong pro-democracy demonstrators. A $37 price point is just another LEGO for consumers to step on.