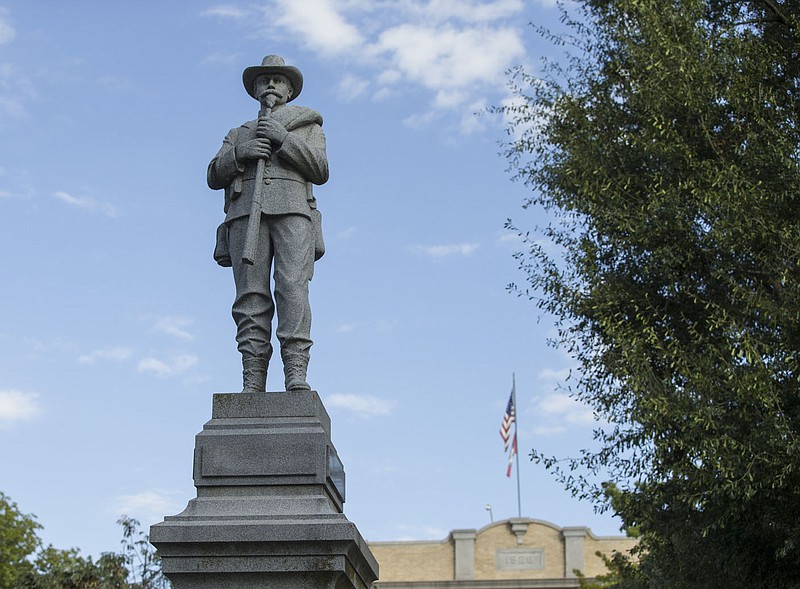 The Confederate soldier monument stands Wednesday, Sept. 25, 2019, on the Bentonville square. The lower part of the soldier's rifle is missing after the statue was vandalized. - Photo by Ben Goff

A state board on Wednesday recommended that the Confederate monument currently located on the Bentonville Square remain on the National Register of Historic Places after it is moved.

The group that owns the monument, the Arkansas division of the United Daughters of the Confederacy, announced June 1 that it would move the monument to a private park.

The monument, which consists of a pedestal and a statue of a bearded Confederate soldier, has been on the downtown square since 1908. The property where the monument sits is owned by Benton County, according to County Judge Barry Moehring. The city of Bentonville maintains the property, including beautification. The monument has been listed on the National Register of Historic Places since 1996.

The Arkansas Historic Preservation Program State Review Board in Little Rock spent less than 10 minutes Wednesday discussing the request to keep the monument on the national register. The board saw photos of the monument on the square and the private park where it will be moved. No one spoke against the recommendation, and it was approved unanimously.

Joey McCutchen, who represents the United Daughters of the Confederacy in Arkansas, called the action "positive news."

A national register listing is honorary and doesn't prevent owners from doing whatever they want with a property. Moving a property could cause it to lose its listing because the context of place is often part of what makes a property eligible for the register, Whitfield previously said.

The owners of the monument want to maintain the listing when it is moved to a new location, she said.

"We want to follow the process correctly to protect the historical significance," McCutchen said.

The Daughters of the Confederacy will work with the Benton County Historical Society and other community members to move the monument to James H. Berry Park, a private park adjacent to the Bentonville Cemetery, where Berry is buried. The cemetery is at 400 SW F St., just southwest of downtown.

The proposed move will affect the monument's integrity, specifically with respect to its location and setting, according to the National Register of Historic Places' continuation sheet submitted to the state. The statue is in a commercial district, and its new location is on the edge of a residential area, the form stated.

"It will remain in Bentonville and Benton County, whose Confederates the monument was meant to memorialize," the form states.

The monument will be refurbished and kept in a secure location before it is moved to the park. The park project is in the design phase, McCutchen said.

The sculpture of the bearded soldier and its base are made of granite. The monument was sponsored by the James H. Berry chapter of the United Daughters of the Confederacy in honor of Benton County's Confederate veterans, according to the National Register of Historic Places registration form. Berry paid $1,500 of the statue's $2,500 cost, according to the form.

The agreement to remove the statue will allow the Daughters of the Confederacy to display and preserve the historical significance of the monument and its connection to the history of Benton County in perpetuity, according to the group's news release.

The Benton County Historical Society will own and operate the park and display the monument, according to the release.