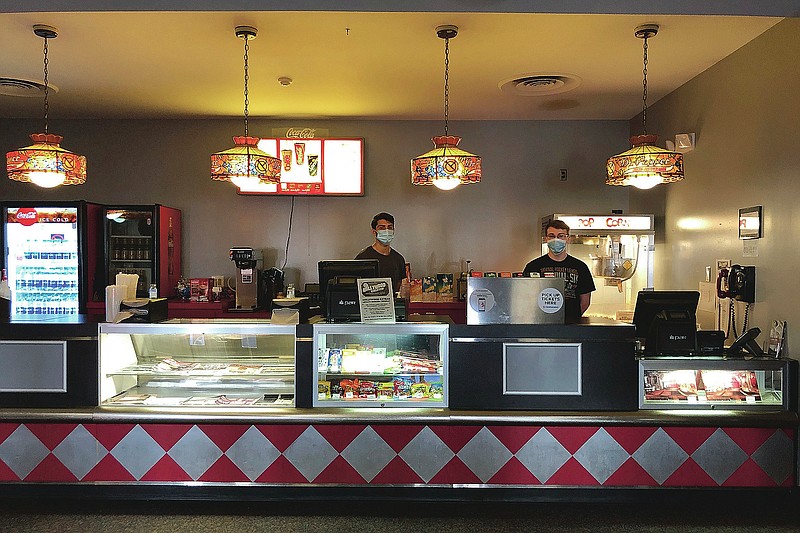 In this June 9, 2020, photo, two employees, work the box office and concessions, in masks, for a showing of The Goonies at the historic Hollywood Theater in Pittsburgh, in its fifth day in operation since COVID-19 forced most indoor theaters across the nation to close mid-March. (AP Photo/Lindsey Bahr)

DORMONT, Pa. -- "The Goonies" wouldn't have been my first choice, but options were limited.

It had been 96 days since I had been to a movie theater. That might not be extraordinary for most, but as a film writer it was downright bizarre. Not even maternity leave took me away for that long. And I missed it.

The situation was still rather precarious in Los Angeles. But I had recently escaped for my parents' house outside Pittsburgh with my 6-month-old. Here, movie theaters could open.

Many were still shuttered, though, waiting for the go-ahead from corporate overlords or some reassurances that may never come. Maybe they were just waiting for new movies.

Yet there was one venue with actual showtimes: A 95-year-old single screen theater in a small borough just a few miles outside downtown. Dormont's Hollywood Theater, a local institution known for rowdy screenings of "The Rocky Horror Picture Show" (immortalized in "The Perks of Being a Wallflower") had a 5 p.m. showing of "The Goonies" and a 7:45 p.m. of the indie horror "The Wretched" every day for a week.

The math was simple: The baby at home ruled out the later show. And that's how Richard Donner and Steven Spielberg's 1985 adventure became my first post-quarantine theater experience on Tuesday in June.

It was a particularly bright and hot day in southwestern Pennsylvania -- the kind of weather that might normally draw crowds into the air-conditioned respite of the silver screen. But on this day, it was only me, my brother and sister in the lobby where two masked employees stood behind the concessions stand.

I asked if it had been busy.

"No," one said. "That's what happens when there are no new movies."

Across the lobby there was a poster for "Wonder Woman 1984" with Gal Gadot surrounded by an explosion of colors forming jagged Ws. But all I could see was "June 5, 2020." It was a date that had been precisely plotted far in advance, when it seemed reasonable to plan for things like movie releases. It had already come and gone.

Inside, every other row was taped off. I was most surprised to see two other people in there already. They had staked out seats near the back. I nodded, but it's hard to give friendly social cues behind a mask.

Everything else felt oddly normal, which itself was unnerving. If you let yourself forget about the global pandemic for a moment, you might be able to convince yourself that you're just in a theater under renovation. But the fantasy of normalcy is fleeting.

We positioned ourselves near the front and, tentatively, settled in. Given the riskiness of even being in a theater and the fact that "The Goonies" was available to watch at home for free, we decided beforehand that leaving early was an option, if not an inevitability.

When the lights went down, a trailer for "Black Widow," which was supposed to come out in May, played. Then one for "Wonder Woman 1984." Here, it just said "Summer."

I never considered the possibility that advertisements for a couple of superhero movies were capable of triggering feelings of melancholy and wistfulness, but here were two major movies with female leads and female directors that seemed to represent these lost months.

I'm not sure when we will ever feel care-free, or even comfortable, in a movie theater again. But it was thrilling and emotional to be back in front of the big screen. No matter how nice your television is, there's nothing like it. "The Goonies" was the perfect movie after all. We even stayed through the credits.