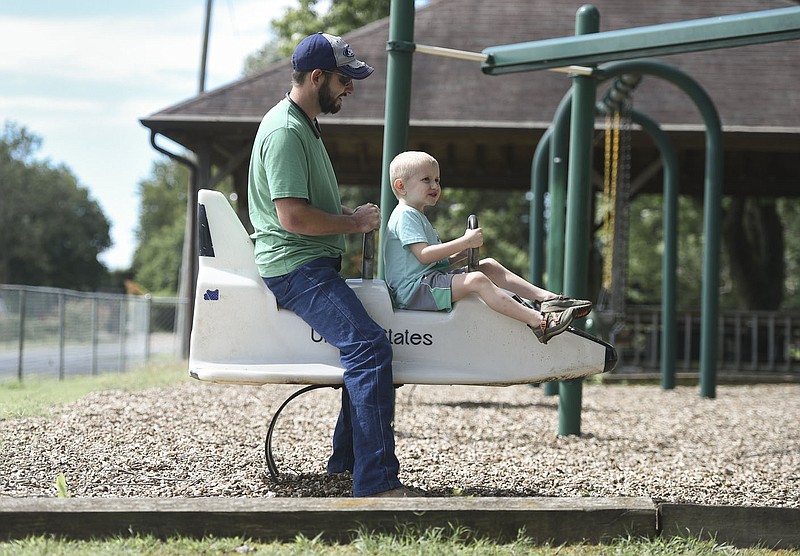 Jonathan Hutchins (from left) and Matthew Hutchins, 4, play, Saturday, August 1, 2020 at a park on Sunrise Dr. in Bethel Heights. Voters in Springdale and Bethel Heights will determine August 11 if Springdale will annex its neighbor to the north. Check out nwaonline.com/200802Daily/ for today's photo gallery. (NWA Democrat-Gazette/Charlie Kaijo)

SPRINGDALE -- Springdale surrounds Bethel Heights on three sides and might erase the town from the map if voters approve.

Early voting in both towns begins Tuesday on a ballot issue to annex Bethel Heights into Springdale. Election day is Aug. 11. A majority of votes cast in both cities must support the consolidation for the measure to pass.

Residents proposed the annexation to resolve the issue of Bethel Heights' failing sewer system. If the voters approve the consolidation, Bethel Heights sewer customers will eventually receive service from Springdale Water Utilities, which provides water to the town.

Springdale officials promise residents in neither city will incur extra utility costs or rate hikes if the measure passes. In fact, current residents of Bethel Heights might see their utility rates decrease.

of Environmental Quality has had Bethel Heights' two wastewater treatment plants and its former operator under investigation for more than a year after confirming a neighbor's complaint wastewater was pooling on his land.

The state has told the city to close the plants and find a new way to treat its wastewater.

Bethel Heights officials didn't respond to several requests for comments over several weeks. Their attorney, Robert Rhodes, referred all comment to Mark Henry, a political consultant working for a group of Bethel Heights voters campaigning against the annexation.

Residents on both sides of the issue have formed campaign groups.

"Our Town, Bethel Heights" is working to stop the annexation. "Citizens for a Better Government" promotes the measure.

Susie Wright, a leader in the Our Town campaign, agreed it's extremely important for the city to fix its wastewater treatment system. And she believes the city's wastewater committee and mayor have come up with an effective, affordable solution. The city will build a lift station and a 14-mile pipeline to a facility in south Bentonville.

"I'm not mad at Springdale in any way," she said. "I don't have anything against Springdale. I grew up in Springdale. But I'm very happy living in Bethel Heights and so are many other residents."

Rhonda Neal of Bethel Heights thinks the consolidation into Springdale would be a smooth transition for residents. She said she thinks she already lives in Springdale, and her home of 25 years has a Springdale address.

"That's just what I tell people, that I live in Springdale."

Neal said she would vote for the annexation even if the town's wastewater treatment wasn't in crisis.

The Arkansas Natural Resources Commission has offered Bethel Heights a low-interest loan package of $11.6 million to build a pump station and 14-mile pipeline to connect the city's wastewater system to the Northwest Arkansas Conservation Authority's treatment facility in south Bentonville.

In August 2019, ADEQ told Bethel Heights it must haul for treatment elsewhere 25% of its daily 80,000 gallons of wastewater -- or no less than 20,000 gallons a day until wastewater stops surfacing on the ground.

During the week of July 13-19, the city trucked 612,000 gallons of wastewater at a total cost of $54,834, according to invoices the city supplied to the state. The city sends its sewage to the Northwest Arkansas Conservation Authority's Bentonville plant and the Huntsville treatment plant on weekends when the Bentonville plant is closed.

Raymond Burns, executive director of the Rogers-Lowell Area Chamber of Commerce, said continued use of the system eventually would affect the water supply of Northwest Arkansas.

"They've got an overloaded septic system that doesn't work," Burns said of Bethel Heights, which borders Lowell to the north.

If the town remains, it will need to pay to build the infrastructure it doesn't have, he said.

"And I don't see the tax base for that."

Bethel Heights residents would see a decrease in their overall rates, he said. Bethel Heights customers coming into Springdale would be charged an in-town rate for water instead of the out-of-town rate they pay, he said.

The minimum fees for service will be $10 a month each for water and sewer. Those minimum service charges cover a customer's first 1,500 gallons of both water and sewer use each month, Ward said.

Springdale's City Council in November approved a hike in water and sewer rates requested by the utility to keep up with growth in the region. Ward said the utility doesn't plan to ask for another in the next five years.

Springdale customers also pay for trash, recycling and bulky waste removal through water bills. The city's contract with Waste Management is set at $16.20 per month per household or $194 a year, said Wyman Morgan, Springdale's director of administration and finance.

Springdale's Water Utilities Commission holds about $10 million in reserve for emergencies that could be used to cover the cost of repairing and eventually closing the Bethel Heights plants, Ward said.

Chris Weiser, chairman of the Springdale Water and Sewer Commission, said the commission has about $50 million earmarked for projects in the department's 20-year plan.

"That plan changes very frequently and could include Bethel Heights," he noted.

Weiser said reports from Ward peg the cost for connection to Bethel Heights at less than $500,000. "That's a very small price in our reserve fund." Connecting Bethel Heights should take about six months, Ward said. Residents on septic tanks could continue that use, with no charge from the utility, he said.

"We back them up any time they ask," said Springdale Police Chief Mike Peters, noting the smaller department often works with just one officer on duty.

Springdale Fire Chief Mike Irwin said the city's new Station No. 8, opened this summer, allows quick access to serve residents on the east side of Bethel Heights. And crews at Station No. 3 on North Thompson Street, just south of Wagon Wheel Road, can arrive on the scene in seven or eight minutes, which is the response time for many current locations in Springdale.

Plus, many residents of Springdale get a cut in their home insurance costs because the Fire Department holds a Class 1 rating from the Insurance Services Office, Irwin said.

Merger of the two cities would have no effect on the property taxes paid by Bethel Heights residents for schools or to Benton County.

The increase for a Bethel Heights resident with a home valued at $200,000 would be $92 annually.

Bethel Heights' city-only property tax would disappear if the cities merge, Morgan said. Residents would only be charged taxes for Springdale. Property tax bills for this year are already sent and are due in October, he said, so the increase in taxes wouldn't be imposed until next year.

A millage is equal to $1 of property tax for each $1,000 of assessed value, according to the Washington County assessor's website. The assessed value of property in Arkansas is 20% of its market value, said Assessor Russell Hill.

Jeff Cooperstein, a research associate at the Center for Business and Economic Research at the University of Arkansas, thinks Bethel Heights could be ripe for multifamily housing in part because it sits in the center of the region.

And he said he sees a lot of empty land in Bethel Heights.

"The people in Bethel Heights are paying the price for not taking care of the sewer system," Bayyari said "This is their golden chance. They need to take it and not waste time."

Taldo said sewer service is critical for development. Sewer service and how close a property is to sewer lines are among the first issues developers consider.

"It's the most expensive thing to put in if it's not available," he said. "Everything else combined will cost less than putting in a sewage system."

The promises of a better life in the big city make some Bethel Heights residents just want to stay home.

"Several of my neighbors and I have some concerns for the future," Wright said. "We are concerned for the fate of the town we love."

Gary Phillips on Tuesday sat under a lush shade tree in his home's backyard on Quail Run in Bethel Heights. He's lived there for 24 years.

"We've worked our whole lives for this house," he said. "And I don't think I want to be part of Springdale, to be honest."

Logan Featherston was building a fence around the front yard of his home on Rosebud Lane. He said he appreciated his town's less restrictive codes that allowed him to build his fence as he wanted.

Parents are worried their children will have to change school districts, Wright noted. Students from Bethel Heights currently are zoned to both Rogers and Springdale schools, with the boundary line drawn along East Apple Blossom Road.

Jared Cleveland, superintendent of Springdale Public Schools, offered assurances that his district would not seek to annex the Bethel Heights students. 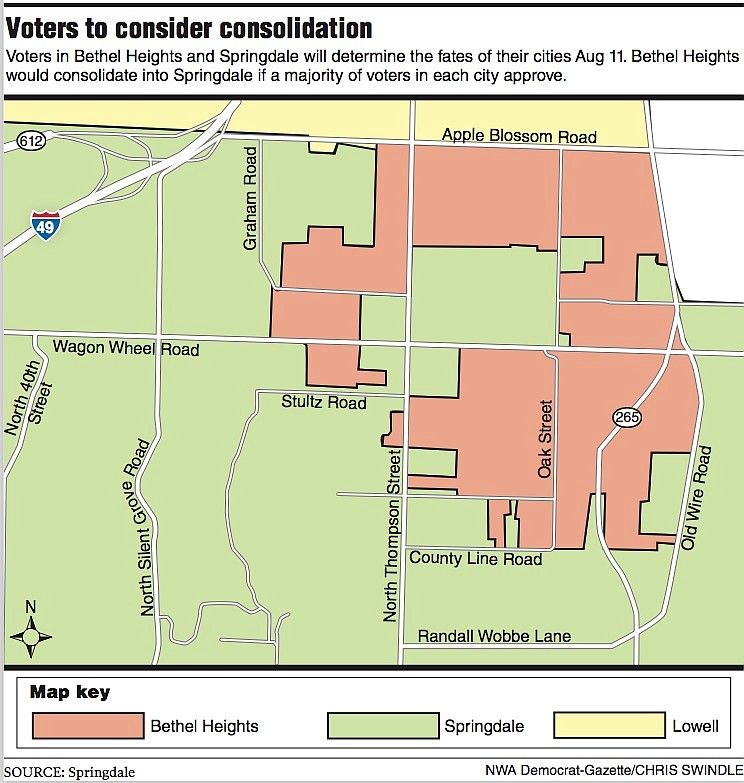