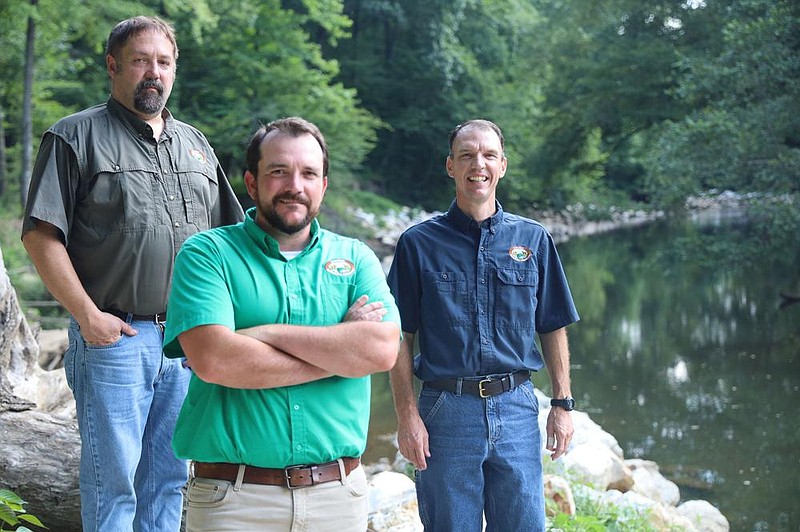 Construction projects aren't particularly unusual in Northwest Arkansas. But four years ago, one major undertaking was capturing attention even in this fast-growing part of the state: fixing a slice of wild Arkansas waterway.

The Mulberry River, designated a National Wild and Scenic River, is renowned for its smallmouth bass fishing and coveted whitewater stretches. But the section in question, having strayed from its original channel, was chewing rapidly into the riverbank, eroding private property and adding tons of fish-choking silt to the waterway.

In partnership with the U.S. Forest Service, U.S. Fish and Wildlife Service and a private landowner, the Arkansas Game and Fish Commission Stream Team took on the task of correcting the stretch. Thousands of tons of rock vanes were engineered to channel water appropriately, along with repair and remediation of the bank with trees and other vegetation to hold the soil, planted by volunteers.

The Stream Team followed up the Mulberry River project with similar work on the Kings River last summer, but the bulk of its work doesn't lie with projects as large and complicated as these. Most of what the program does is harness citizen conservationists to help in the ongoing efforts to protect and maintain Arkansas' 90,000 miles of streams providing habitat for fish and wildlife as well as supplying millions upon millions of gallons for drinking water, irrigation and industrial usage.

"Over our 20 years, we came up with about 200 training events and reached about 100,000 citizens with water quality education," Burnley says.

The group's advocacy work provides scientific and first-hand knowledge on concerns affecting the state's waterways and provides concerned citizens tool kits to make their voices heard. And the stewardship mission involves aquatic habitat restoration from small, local events to the major projects carried out on the Mulberry and Kings rivers.

"To date, we've done restoration on about 1,500 miles of streams in the state. We've also received 650 individual water quality samples and 450 macroinvertebrate samples from about 200 individuals. In all, nearly 10,000 hours of volunteer service."

Wentz is one of four coordinators who helps mobilize local groups with an interest in stream ecology, giving them the tools to address a specific problem.

"Our role is to really encourage already engaged citizens who want to do more," he says. "Generally, there's a citizen or a group of citizens who are already concerned about an issue and want to form a team. In a few instances, we actually go out and actively recruit and engage team formation, but generally, someone is approaching us with an interest or a concern and we give them the tools to understand the issue better and become an advocate."

"We help them achieve their goals, either through learning more about aquatic ecology, aquatic chemistry or restoration components. The onus is then on the citizen to join or create a team for certain water bodies that they may be interested in."

Stream Team activities are the epitome of grassroots activism, with projects ranging from collecting water samples to picking up litter. The program's administration is constantly working to develop new ways for people to get involved.

"One of the new things that we've entered onto our website this year includes photo point monitoring. This is about the most basic citizen science that we can do," Burnley says.

"For instance, you're noticing some erosion starting to occur and you want to track it through time. You submit those photos to us and we work with you to track those changes. That's the simplest form of Stream Team citizen science that we have available."

"Another one of the simpler things we have is our litter pick-ups. Cleaning up stretches of certain streams in the state is a great beginner activity and we also try to involve people with tree planting when we do big projects. That's another simple best management practice that we can do before something becomes an issue," Wentz says.

"Plus, just having these teams out there, we can give them a little training. And maybe they're going past a bank and they see that it's starting to have minor problems, versus letting it get five years down the road and it's a major issue. Just being our eyes on the ground or our eyes on the water is a big benefit."

Because of the fundamental nature of much of Stream Team's work, the program has been successful in attracting participation by school groups and their teachers. This not only helps jazz up students' earth science curriculum but plants a seed for later in life.

"We work with a lot of school groups, from high school and younger to college-age students," Burnley says. "One of our goals there is keeping those kids engaged for multiple years. While we have them, we want to teach them what we can and we hope that sticks with them over their lifetime and they end up on one of their local Stream Teams as an adult."

More information is available at www.agfc.com/streamteam.