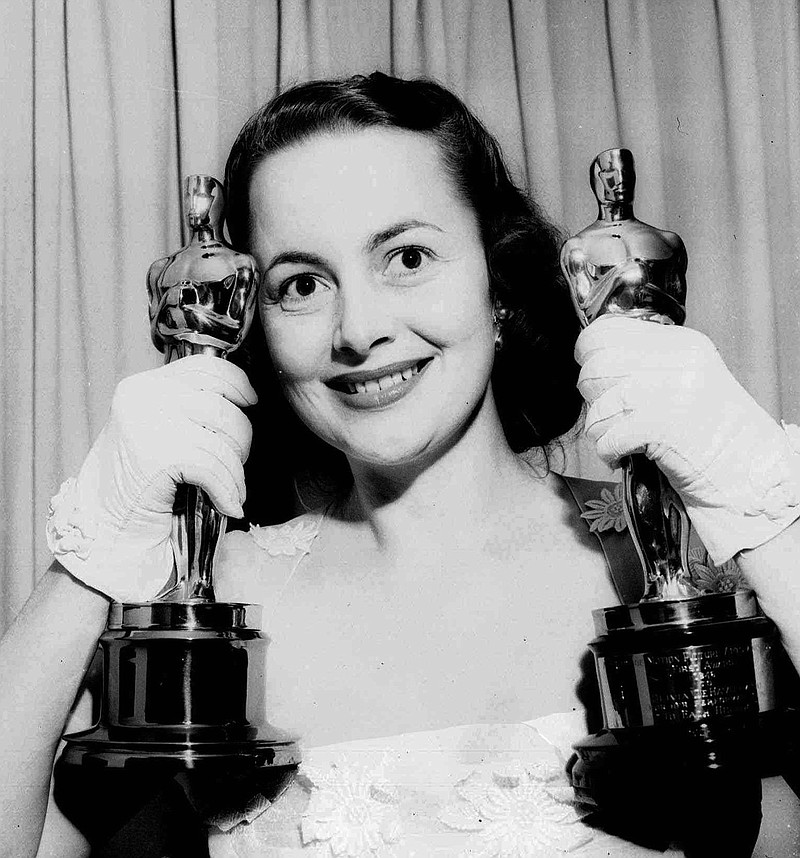 Actress Olivia de Havilland holds her Oscar statues in this March 24, 1950, file photo. De Havilland won for her performance that year in “The Heiress,” and in “To Each His Own” in 1946. (AP file photo)

Best known for her turn as Melanie Hamilton in "Gone With the Wind" and her swashbuckling adventures with Errol Flynn, Olivia de Havilland specialized in playing aristocrats of virtue, though her work would get more varied as her career progressed.

Her Oscar-winning role in "The Heiress," as a plain woman whose heartbreak over a gold-digging suitor turns into chilly resolution, cannot currently be streamed, but it's available on Criterion Blu-ray and DVD.

Here are nine more films that illustrate the dramatic chops that won her two Oscars and some of the riskier roles that she gambled her image to explore.

• "A Midsummer Night's Dream" (1935). Marked for stardom from the very beginning, de Havilland made her screen debut in this glittery production of Shakespeare's romantic fantasy, appearing alongside several stars and stars-to-be, including Dick Powell, James Cagney and a teenage Mickey Rooney as Puck. De Havilland would give more naturalistic performances in the future, but as Hermia, a young woman caught between the man she loves and the man her father requires her to marry, her emphatic passions fit into a film that gives Shakespeare a robust reading — to put it mildly. It's an accessible, unpretentious rendering of the play, with a forest set that shimmers in fairy dust.

Rent it on Amazon, Google Play, Vudu and YouTube

• "Captain Blood" (1935).The first in a string of films with Errol Flynn, "Captain Blood" established a winning formula: Flynn as the rakish, irreverent, truehearted hero of the common man, de Havilland as the well-mannered aristocrat worn down by his charms. Set in 17th-century England, the film stars Flynn as a doctor sold into slavery for rebelling against the king and de Havilland as the wealthy colonist who decides to buy him, more out of coquettish intrigue than a need for labor. A large part of de Havilland's role is to react to Flynn, but she's an important surrogate for the audience as he leads a slave revolt and becomes a swashbuckling pirate, hellbent on revenge.

• "The Adventures of Robin Hood" (1938). This film again casts Flynn and de Havilland as natural adversaries who grow into romantic allies, and the Robin Hood myth accommodates their dynamic better than anything else they did together. Flynn is Sherwood Forest's merry troublemaker, a noble Saxon who wages guerrilla war (in gorgeous Technicolor) against the diabolical Prince John and the Normans, with de Havilland's Lady Marian as a persuadable royal. Flynn's combination of rapier dexterity and rapier wit is the main attraction here, giving the film a lightness and joy that is supported by studio artistry.

Stream it on HBO Max. Rent it on Amazon, Apple TV, Google Play, Vudu and YouTube

• "Gone With the Wind" (1939). As the "search for Scarlett" ballooned to 1,400 actresses, de Havilland set her sights on playing Melanie Hamilton, Scarlett's sister-in-law and eventual best friend, working hard behind the scenes to get Warner Bros. to release her from her contract to do it. Over the four-hour-plus running time, Melanie gets a full arc, marrying her cousin Ashley Wilkes, the man Scarlett secretly loves, surviving dramatic childbirth without medical assistance, reuniting with her husband after the Civil War and dying from another pregnancy near the end. De Havilland (on loan to Selznick) plays both confidant and romantic obstacle for the lead character, and a paragon of loyalty and moral decency.

Stream it on HBO Max, which recently added an introduction by Jacqueline Stewart that gives context to the film's controversial attitudes about race. Rent it on Amazon, Apple TV, Google Play and Vudu.

• "Hold Back the Dawn" (1941). A winning prototype for the Gerard Depardieu/Andie MacDowell rom-com "Green Card" nearly half a century later, "Hold Back the Dawn" stars de Havilland (on loan to Paramount) as a schoolteacher who's conned into a marriage of convenience by a Romanian gigolo (Charles Boyer) waylaid in Mexico. His plan is to gain U.S. residency and dump her for a glamorous dancer (Paulette Goddard), but their sham marriage evolves into something approaching a legitimate one. Scripted by Charles Brackett and Billy Wilder as their famed partnership was just hitting its stride, "Hold Back the Dawn" is a clever and intoxicating love triangle.

Stream it on Peacock

• "To Each His Own" (1946).De Havilland won the first of two Oscars in this film, which finds her suffering with heartbreaking nobility until the last, bittersweet scene. She stars as a small-town girl who falls for a pilot (John Lund) during World War I, stays with him long enough to get pregnant before losing him in combat, and, through a complicated series of circumstances, has to give the baby up for adoption. When the boy grows into a pilot himself (also Lund), now in World War II, it sets up a touching payoff for a lifetime of self-sacrifice.

Stream it on Peacock

• "The Dark Mirror" (1946). Also in 1946, de Havilland got the opportunity to play a dual role herself, starring as identical twin sisters, Terry and Ruth, who fall under suspicion when their neighbor is murdered. Despite necklaces and pendants to help tell one from the other, investigators puzzle over which sister is normal and which one is psychotic, especially when the two engage in mind games and manipulation. It is a parlor game disguised as a serious psychological thriller, but de Havilland cuts loose in the lead roles, and director Robert Siodmak ("The Killers"), a noir specialist, adds plenty of pulpy atmosphere.

Stream it on Amazon Prime

• "The Snake Pit" (1948). "The Snake Pit" shined a light on state mental institutions and their reliance on remedies like hypnotherapy and electric shock treatments. The devotion to realism carries over to de Havilland's performance as a schizophrenic housewife who hears voices and experiences massive disorientation, which the film communicates via de Havilland's inner monologue. The terror of her situation is reflected in the title, which refers to the padded cell reserved for hopeless patients, but the film is more nuanced about the possibilities of recovery and the relationships the afflicted have with doctors and with each other.

Rent it on Amazon, Google Play, Vudu and YouTube

• "Hush ... Hush, Sweet Charlotte" (1964). Two years after setting Bette Davis and Joan Crawford against each other in the deranged psychological thriller "What Ever Happened to Baby Jane?," the genre maestro Robert Aldrich brought Davis back to pair up with another screen legend, de Havilland, in a similarly fever-pitched drama. De Havilland replaced Crawford, who left the production early on due to "illness."

Davis is the more dominant presence as a wilted Southern belle who was exonerated for the murder of her married lover (Bruce Dern) nearly 40 years earlier, but most assume she was guilty. De Havilland arrives as a once-poor/now-rich cousin from New York who's there to help save Davis' mansion from demolition but whose presence dredges up the past once more. Their battle of wills manifests itself into an intense, hallucinatory melodrama with a wonderfully macabre ending.