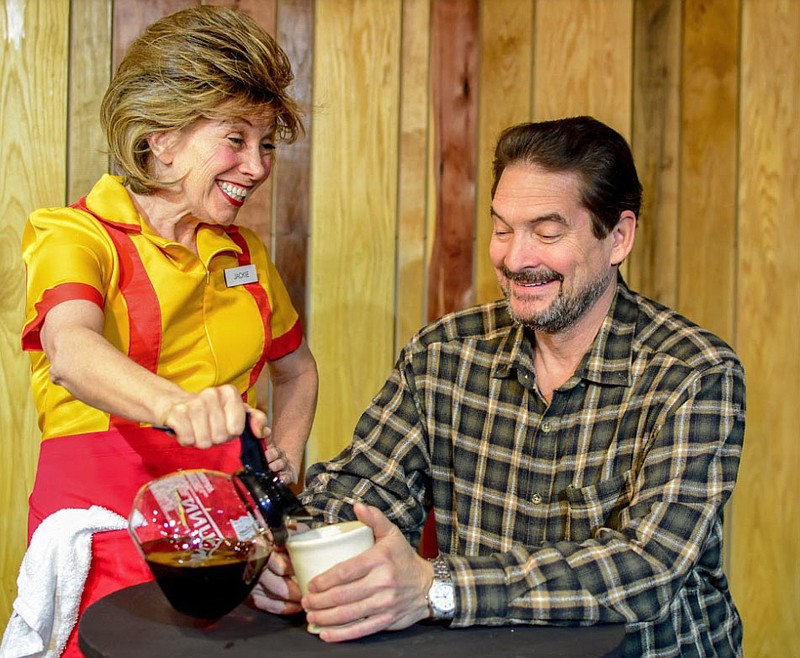 It's admittedly a smaller story than a major arts center postponing its Broadway season. But Smokehouse Players, a company that produces intimate theater at the old Ozark Mountain Smokehouse in west Fayetteville, is also on hiatus. And its founders, Tim Gilster and Terry Vaughan, hate waiting just as much as anybody else.

Founded in 2018, a few years after the couple moved to Fayetteville from New York City, Smokehouse Players had cast and was ready to start rehearsing its sixth production, Edward Albee's "Who's Afraid of Virginia Woolf?," when the coronavirus hit Northwest Arkansas.

"All of the pre-production work was in the bag, and Tim and I had been working on our scripts for about eight weeks so we would be in great shape for playing George and Martha," Vaughan says. "We had the rehearsal schedule worked out, artwork finished, marketing language written, posters printed, set and props in hand, publicity interviews scheduled for radio, TV and print, and the show was already listed on all the free calendars. We even had seven matching donors for the Magdalene Serenity House opening night benefit. We were ready!

"We had our first production meeting and script read-through at the Smokehouse on March 8, and the next communication we had with the cast and crew was to tell them we were postponing until further notice," she continues. "It was heartbreaking. Like a death."

Vaughan explains that the company has been fortunate to work in "the Chillin' Room, which is a large walk-in refrigerator inside the Smokehouse that Frank Sharp and his son Alex converted into a unique performance space."

"Because of our experience doing off-off Broadway theater in unconventional spaces, we knew how to produce and perform theater there, so we were thrilled at the opportunity and jumped at the chance," Vaughan remembers of being approached by Sharp. "We formed Smokehouse Players and our first production, 'In the Middle of Nowhere' by Kent Brown, launched the company in February 2018."

Being able to create theater without the challenges of life in the Big Apple has been everything the couple could have hoped for -- even without some of the rewards.

"Life in New York was a ton of fun," Vaughan remembers. "For the first three years, we lived in Chelsea on 15th Street between 8th and 9th Avenue in a tiny 14-by-18 foot basement studio apartment. I waited tables in the Village on 13th Street, and Tim worked for a brokerage firm making cold calls.

"We left Manhattan in 1985 and moved to a one-bedroom apartment in Park Slope Brooklyn, where we stayed for 25 years," she continues. "I started working for the Shubert Organization -- they own and operate most of the Broadway, Off Broadway, and out-of-town theaters -- and one of the great perks was getting free tickets to see Broadway shows. In one week, Tim and I saw Jason Robards in 'A Month of Sundays,' Peter O'Toole in 'Pygmalion' and Richard Kiley in 'All My Sons.' It was an amazing opportunity for two poor actors to get to see so much quality theater for free! We took acting classes, worked on soap operas, and did lots of off-off Broadway shows. It was a wonderful time in our life, and we are blessed to have made many great friends in the artistic community who we are still in touch with today."

Now, she adds, she is "proud to say that the goal of the Smokehouse Players is to provide free theater to the community while raising awareness about Magdalene Serenity House. That is our mission, and it won't change once we can return to the Smokehouse! We are keeping our schedule loose so we can adjust to what is happening in the community and have a project in mind that is two characters -- 90 minutes with no intermission -- just to see if folks are ready to return and see a show.

"I just hope the matching donors for our opening night Magdalene Serenity House benefits continue to remember us and stick with us when we come back in 2021!"