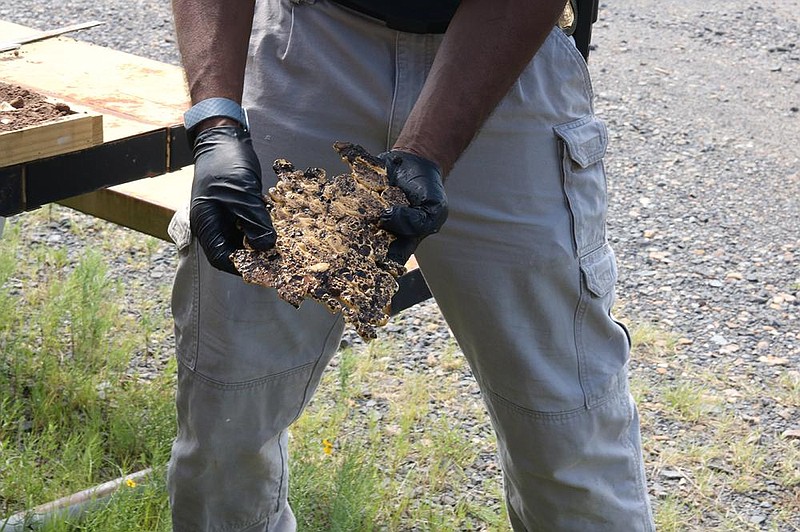 An FBI class attendee works with a footprint cast Saturday in Jacksonville. The agency has a database to determine what footwear is captured in the cast, the agent conducting the class said. (Arkansas Democrat-Gazette/William Sanders)

JACKSONVILLE -- With tables 6 feet apart Saturday, FBI agents from Little Rock taught a public course in on federal civil rights and "color of law" investigations as they pertain to law enforcement.

The goal was to inform people about their constitutional rights and what to do if they believe their rights have been violated, FBI Supervisory Special Agent Ryan Kennedy said.

"It's to help people to understand what is or is not a civil-rights violation," Kennedy said, "and it's also to ... start having these really difficult conversations that people don't necessarily want to have on their own."

Normally, the FBI classes, which cover a variety of topics, are conducted in conjunction with local law enforcement officials, with officers engaging with community members about their roles and responsibilities.

However, the covid-19 pandemic has limited what the course can accomplish.

During Saturday's session, participants got to take turns shooting a pistol, shotgun and rifle at a range, and they worked with an evidence team to look at footprints and fingerprints and see how that evidence is processed.

During the sit-down portion of the class, participants sat at individual tables 6 feet from other attendees.

The social distancing is difficult, Kennedy said. "One thing we are trying to do is to find venues that are very large so that we can get people spaced out," he said.

Saturday's venue was a large room. "We were able to keep everyone spread out," he said.

That wasn't the case with a course for the media or one at Central High School. "We used masks for that entire time," he said.

The pandemic also has meant that attendees cannot participate in a firearms training simulation part of the class.

One of the simulations, Kennedy said, involves an attendee playing the role of a riled-up person during a traffic stop. In that scenario, an individual walks up and points a smartphone at the person, holding the phone like a firearm.

As part of the exercise, simulated shots are fired and participants are asked to relate how many shots there were, Kennedy said. Often, the participants can't accurately report that information. Some may say that only a handful were fired, when in reality more than 10 were fired.

Pandemic restrictions have put a hold on that exercise.

As for people's federal rights, Kennedy said that for a police officer to be convicted of violating someone's constitutional rights, the FBI needs to establish what the violation was, the extent of government-granted authority in that situation and the willfulness of the officer.

"Usually it's the willfulness that's the hard one to prove," Kennedy said.

To prove willfulness in an arrest or use-of-force situation, it needs to be clear that the officer knew about certain aspects of the situation and acted in accordance with that knowledge, Kennedy said.

Additionally, officers can transfer culpability to another individual by telling that person to do something that's against the law.

Kennedy cited the "Mississippi Burning" investigation in which authorities conspired with the Ku Klux Klan to kill three men who had been organizing boycotts of businesses in the area. Members of the KKK and the officers involved in that situation were guilty of color-of-law statue violations, he said.

Also part of the course is dispelling misconceptions about the FBI. Kennedy said the FBI works well with local- and state-level partners, despite movie depictions to the contrary.

"We're always working together to complete the investigation," and the violations being investigated determine what agency will handle the case, he said. Generally, the most severe charges are what officials pursue.

"I think all of it was valuable," he said. "Everything you see in media every day, all that stuff happened. It's not like they made any of it up."

He said he particularly enjoyed the range shooting and evidence-processing portions of the class.

"That was awesome," he said. "That stuff is just interesting. Not that we'd ever use those skills, but it's good to know to see where both sides are coming from."