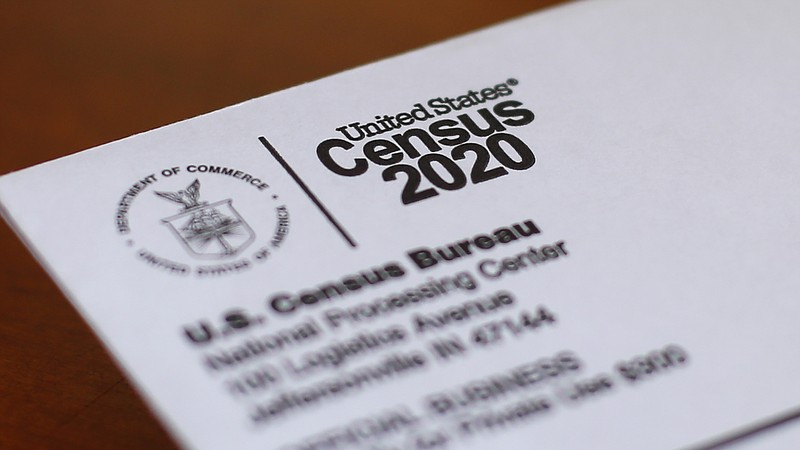 FILE - this April 5, 2020 file photo, shows An envelope containing a 2020 census letter mailed to a U.S. resident in Detroit. A federal judge on Thursday, May 21, 2020, agreed to impose financial sanctions against the Trump administration for failing to produce hundreds of documents during litigation over whether a citizenship question could be added to the 2020 census. (AP Photo/Paul Sancya, File)

FAYETTEVILLE -- Bella Vista has the highest response rate to the U.S. Census of any city in Arkansas, the most recent federal figures show.

Both Benton and Washington counties have rates above the state and national averages, the figures show.

The federal Census Bureau posts a self-response rate based on the number of households in a town, county or state. The rate is the percentage of those dwellings where someone has responded to the census survey.

As of Tuesday, 79.7% of households in Bella Vista completed the survey online, by mail or by phone, according the bureau's website. The next-highest response of any city in Arkansas was almost 4 percentage points lower with Maumelle's rate of 75.8%.

Being ahead of the census curve is something of a Bella Vista tradition, said Cassi Lapp, city spokeswoman.

"Mayor Peter Christie addressed the importance of the census in every public speech or appearance he has given as far back as October of last year," Lapp said. "The city approached the churches in the area asking they help encourage their congregations to respond. We also pushed the information out early on, to help people be more aware, and provided a laptop with internet access at our city hall for those who didn't have the ability at home to respond."

Benton County as a whole reports a 65.8% response rate, putting the county in a three-way tie with Lonoke and Faulkner for the best county response rate in Arkansas.

Washington County is close behind with 63.1%, enough for sixth place among the state's 75 counties.

Local census advocates warn, however, response rates in the 60% range are poor. The census count is also falling into a pattern they feared: Hard-to-count populations such as immigrants and the local Marshall Islander population are not well-represented.

The covid-19 pandemic is making the situation worse, they say.

"People were dealing with life and death issues, especially the people we were trying to reach," Birkhead said.

The Arkansas Department of Health and census figures show Marshallese make up, at most, 3% of Northwest Arkansas' population, but account for more than half of the region's covid-19 deaths.

Census figures are used in determining U.S. House and state legislative districts. They also directly affect how much of federal taxpayer money for various programs goes to states and cities.

The U.S. Constitution requires a census, a count of everyone living in the United States, every 10 years. This is a census year. Every household should have received notice by mail or email from the Census Bureau by April 1, asking for a response by either mail, website or telephone.

Visits by census takers to households with no response will begin Aug. 11, said Linda Gladden, bureau spokeswoman. It was originally scheduled to begin May 13, but was delayed by the pandemic.

The census bureau divides cities and counties into census tracts of no less than 1,200 people living in them and no more than 8,000. Birkhead said Springdale tracts with response rates in the 50th percentile are neighborhoods with high Marshallese and immigrant populations.

Mireya Reith, founder of the Springdale-based immigrant advocacy group Arkansas United, said the importance of the census is struggling to get attention during the health crisis.

"We keep hearing 'Sorry, I can't deal with this right now,'" she said.

Besides the sickness itself, the economic impact has hit people very hard, she said.

"There's just not enough bandwidth for people dealing with their problems or with public officials to get the message out," Reith said. "People are strapped with the needs of their own families."

Mayor Greg Hines of Rogers, a city with a large immigrant population, said the pandemic forced Rogers to rethink its census strategy for reaching minorities because of the pandemic.

"Our biggest disconnect was the faith-based community, because we were planning on reaching people in churches," he said. "That was the way we expected to reach people quickly to get them to participate in the census." Church assemblies, along with other large gatherings, have been limited by the pandemic.

"That really slowed us down, but we're trying to replace that through contacts with large employers and locally owned minority businesses," Hines said.

Eroding trust in the federal government is another serious problem, Reith said. The president has openly called on the Census Bureau to not count undocumented immigrants for purposes of congressional representation -- even though the U.S. Supreme Court prohibited the administration from asking about citizenship, she said. And changes to the Deferred Action for Childhood Arrival, or DACA program, have increased mistrust, she said.

Northwest Arkansas' 3rd Congressional District self-reporting rate is 62.6%, bureau figures show. This is the highest of any of Arkansas' four congressional district.

Census survey response rates as of Tuesday of cities in Benton and Washington counties: