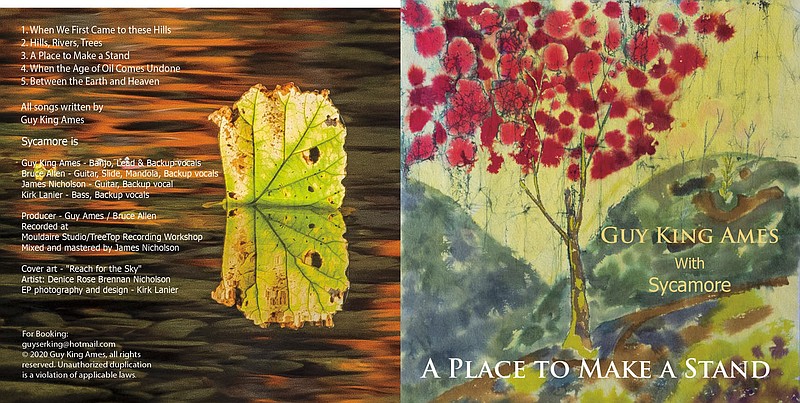 FYI ‘A Place To Make A Stand’ The new CD by Guy Ames and Sycamore is streaming on most popular services. To order a physical CD, with cover art by Denice Nicholson, send a check for $12 to Guy King Ames, 18292 Wildlife Road, Fayetteville 72701.

Guy King Ames didn't expect his new band, Sycamore, to record a CD when they did. And he certainly didn't expect it to be a panacea in a time when fans need anthems to sustain them. But both things have happened during the coronavirus quarantine, much to his surprise.

With a master's degree in horticulture, Ames is probably best known around the region as an authority on growing fruit in the Ozarks -- an expertise he credits to University of Arkansas professor Roy Rom and the fact he's been "granted such a great butt-kicking/education by Nature, a harsh (but beautiful!) mistress if ever there was one!" He came to Northwest Arkansas in the early 1970s as a homesteader, a choice he expected would yield an "idyllic, Thoreau-envisioned life."

"It was, forgive me, the best of times and the worst of times," he says, quoting from one of his songs, "When I First Came to these Hills," to sum it up: "We thought love was enough/But I guess it's not."

"I really thought that with my enthusiasm, smarts and energy it would be a proverbial walk in the woods," he explains. "But I really came to it almost wholly ignorant and unprepared, though it took me some time to realize that."

One thing led to another, and Ames left farming but not the farm.

"I never gave up my place or my love of trees and nature, and after 10 years, in 2010 or so, I slowly started farming again but with a clearer idea of what it all entailed," he says. "Somewhere in there, I wanted to write about that journey, including the heartache but try to encompass all of it, the love, the hardships, the beauty, the pain and to announce that I'm still here."

Ames had also been making music for a long time, much of it in various combinations with Bruce Allen, Jim Nicholson and Kirk Lanier.

"Perhaps the best-known version was Strange Heroes, which was pretty popular 2000-2010 and won the best CD in the old Northwest Arkansas Music Awards competition in 2004," he says, "which rather pointedly reveals our incipient decrepitude!" Sycamore, however, is still less than a year old.

"The covid lockdown was a gut punch," Ames admits. "We had been leisurely working on the CD months before -- Bruce is a real motivator in the band, and if I'm honest about this, he had this project started before I even knew about it -- and we even thought we'd have it ready and for sale at the Valentine's Day gig at Black Apple Cidery in Springdale." Instead, the CD was completed minus a drummer, relying instead on Lanier's bass, and recently debuted on streaming services like iTunes, Apple Music and Amazon. It seems perfectly timed for the current situation with songs like "A Place to Make a Stand" and "When the Age of Oil Comes Undone."

"'A Place to Make a Stand' is by far the most lyrically complex of the five songs," Ames says. "The first part is a regretful indictment of where we humans are right now and leads into an exhortation to do something about it! Also, I have to point out Jim's impeccable mixing, especially Bruce's guitar solo on this song.

"'When the Age of Oil Comes Undone' is my contribution to the suddenly crowded field of apocalyptic literature, movies, songs and television shows," he adds. "When I was writing it, I was feeling pretty pessimistic, but honestly, I don't think that the future is necessarily going to be grim. So I decided to add a hopeful and musically very anti-thematic bridge that goes, 'So tend to your gardens and to the ones you love/And bow to the mystery up above.' I hope this song both surprises and lifts up the listener!

"I want to inspire people to look at the natural world, see the dangerous predicament humanity is in now, and see that the world is worth preserving and caring for," Ames concludes. "This is it, and time is running short. We need to start now." 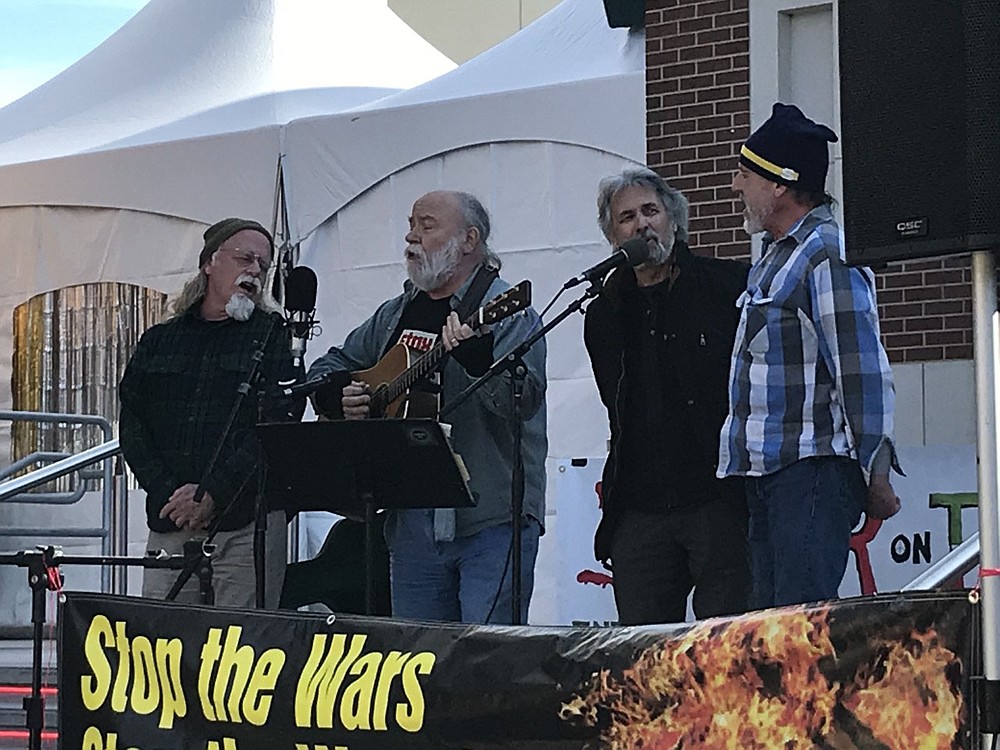 “The four of us share a lot of folk and rock sensibilities,” Guy King Ames says of his new band, Sycamore. “Harmonies are a big part of what we’re about, and pre-covid we used to — oh, I hate that past tense! Let’s say ‘usually.’ We usually do a song or two a capella just to show off!” The band has a new CD, “A Place to Make a Stand,” available on popular streaming platforms. (Courtesy Photo)
More News

‘A Place To Make A Stand’

The new CD by Guy Ames and Sycamore is streaming on most popular services. To order a physical CD, with cover art by Denice Nicholson, send a check for $12 to Guy King Ames, 18292 Wildlife Road, Fayetteville 72701.