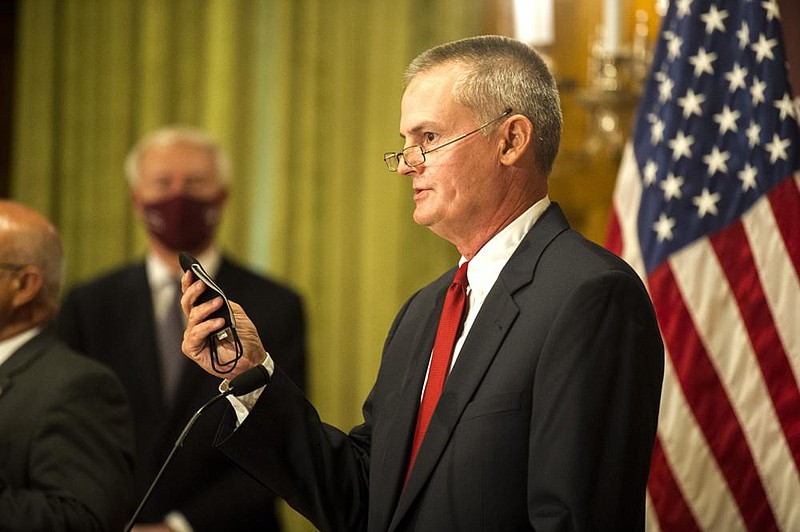 Lance Taylor, executive director of the Arkansas Activities Association, on Friday emphasizes the importance of wearing masks before and after practice. The association handles issues on sports and nonsports interscholastic activities. More photos at arkansasonline.com/81gov/. (Arkansas Democrat-Gazette/Stephen Swofford)

Gov. Asa Hutchinson on Friday told the state's high school athletes to grab their helmets and be ready for practice, even as the state's daily count of coronavirus cases jumped by 752 and deaths from the virus rose by 11.

"Sports is a very important part of the development of our youth," the governor said, adding that the districts were going to learn from the next three weeks of training and practice before schools open on Aug. 24.

"We'll learn what adjustments need to be made," he said. "And we'll improve our safety protocols."

Teams will be allowed to wear helmets through Aug. 7 for "no contact" team drills.

"My message for the football players on Monday is to grab your helmet for practice and then after practice, grab a mask," Hutchinson said. "Because our responsibility for safety extends beyond the practice field."

Hutchinson has asked the Arkansas Activities Association to submit a plan to the state Department of Health on what the association will do for the 2020 season as far as practices and games.

Friday afternoon, Hutchinson announced the creation of an advisory group led by Dr. Greg Bledsoe, the state's surgeon general, that will meet Monday to help the Health Department create a plan for sports during a pandemic.

[Video not showing up above? Click here to watch » https://www.youtube.com/watch?v=2tWz3oweqkw]

The announcement comes even as high schools around the state have announced coronavirus cases among student athletes.

Interim Health Secretary Jose Romero announced that the number of covid-19 patients hospitalized increased by three to 507; of those, the number on ventilators decreased by one to 100.

Romero said the number of active cases was 6,645, including 75 from nursing homes, 329 in correctional facilities and 6,241 from the general population.

Counties with the highest number of new cases included Sebastian with 81; Pulaski with 77; Benton with 51; Washington with 41; Independence with 31; Crittenden with 29; Union with 29; Mississippi with 25; Jefferson with 23; Saline with 21; and Craighead with 20.

Hutchinson said that 7,207 tests were administered in the state over the previous 24 hours.

The governor praised the Health Department's labs, saying the employees work 24 hours a day, seven days a week with rotating teams in order to meet the testing demands.

The Health Department labs process about 15% of all the state's covid-19 tests, according to department data.

Those tests administered by commercial providers and hospitals increased slightly over the past 24 hours, Hutchinson said.

The governor announced Wednesday that the White House had assured him in a conversation this week that testing across the nation will ramp up significantly in the coming month.

While he didn't give specifics, Hutchinson said the six commercial labs processing tests for Arkansas and the rest of the nation would get extra assistance related to supply chains and support.

Friday, Hutchinson said he had an additional conversation with Alex Azar, the nation's secretary of health and human services.

"We discussed the testing as well and the resources we hope would be brought to bear. I would like to think the increased testing from our commercial labs reflected in the last 24 hours is a good sign that they are increasing capacity," Hutchinson said. "But it's going to take longer. I expect that change to be reflected more in this next month. There are a few additional things in the works, but that's all I have for you at this point."

Hutchinson said he expects that the $600-a-week enhanced unemployment benefit will be decreased by Congress.

The benefit was created by the federal Coronavirus Aid, Relief, and Economic Security Act, which was approved in March by Congress. The $600 is paid in addition to the state's weekly unemployment insurance payment.

Hutchinson said the "economic situation of our country" is a "great concern."

"I would expect that [the $600 benefit] to be dropped by Congress in terms of reducing that amount. I don't know what they'll settle on," the governor said. "I do believe it is important that we provide people with and get them the jobs and the job opportunities that they want. So that is really a focus as well as a safety net. I just have to wait on congressional action. But we don't want to be paying more money to stay at home if there's an opportunity to work. And I know that's one of the things that Congress is debating."

Among the Arkansans who died of covid-19 this week was Leonard Hicks, a 71-year-old prisoner at the Ouachita River Unit in Malvern, who died Wednesday at UAMS Medical Center.

Hicks' daughter, Candy Lewis, said three of her father's cellmates had tested positive for the virus before he fell ill. He was taken to the hospital July 11 and almost immediately placed on a ventilator, she said.

Despite her father's problems with drugs, Lewis recalled that her dad, known as "Pee-Wee," went out of his way for others and was a big fan of Western movies. John Wayne films were his favorite, she said. Hicks was in the second year of a 17-year sentence for selling drugs and maintaining a drug premises in Union County, according to court records.

On Friday, a spokeswoman with the Arkansas Department of Corrections said that another prisoner at the Ouachita River Unit, a man in his 50s serving a sentence for rape, died at Baptist Health-Hot Spring County while undergoing treatment for covid-19.

At least 27 inmates in Arkansas have died of covid-19, according to a Health Department report from Thursday, and 1,259 inmates have tested positive at the Ouachita River Unit.

Rileymoore had been admitted to CHI St. Vincent Infirmary on July 22 with respiratory failure with covid-19 positive pneumonia. She had a previous medical history of obesity, diabetes and sleep apnea. She died Friday.

James Ollison, 72, of Dermott, died Friday in the intensive-care unit at CHI St. Vincent. He was admitted on July 24 for respiratory failure secondary to covid-19. He had a history of diabetes, hypertension and chronic obstructive pulmonary disease, the coroner's report said.

Hurley Berry, 86, of Hamburg, died Wednesday in the intensive-care unit at Baptist Health Medical Center in Little Rock. He had been admitted to the hospital on July 9 with covid-19 and pneumonia. He had a history of chronic obstructive pulmonary disease, bladder cancer and hypertension, the coroner's report said.

Jackie Ethridge, 65, of Dermott, died Wednesday at Baptist Health's hospital in North Little Rock. He was admitted to the hospital on July 16 from Dermott City Nursing home for hypoxia. He was tested on admission and was positive for covid-19. He had a history of dementia, hypertension, Alzheimer's and seizure disorder, the coroner's report said.

Dermott City Nursing Home has had 17 residents and 10 employees test positive for covid-19, according to a Health Department report released Friday.

Mickey Credit, 77, of Mayflower, died Tuesday in the intensive-care unit at Baptist Health Medical Center in Little Rock. He had been admitted to the hospital on July 1 with cough, fever and respiratory difficulty. He tested positive for covid-19. Credit had a previous medical history of diabetes, according to the coroner's report. 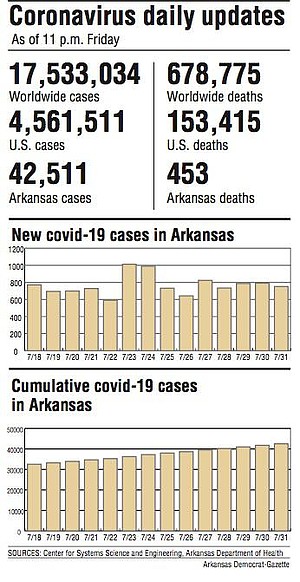