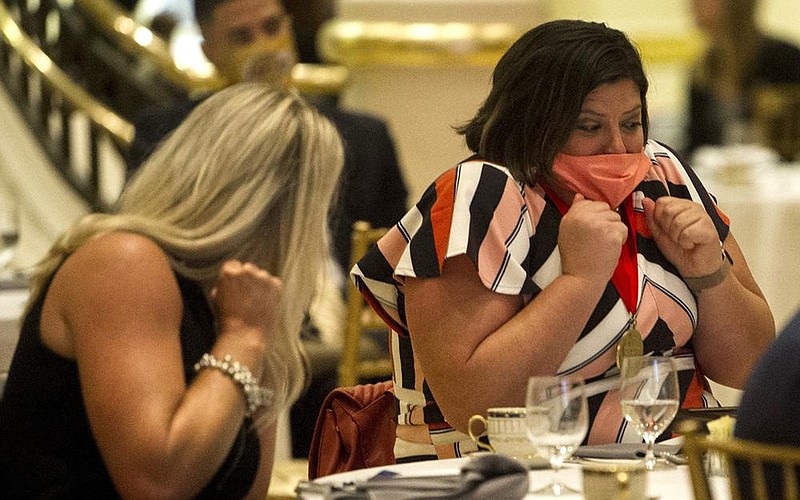 Four teachers from around the state Friday were named semifinalists for 2021-22 Arkansas Teacher of the Year.

Two library media specialists were included in the first year the specialty was eligible after action by the General Assembly. They were honored at the Arkansas Governor's Mansion Grand Ballroom on Friday. A third library media specialist, who was not selected as a semifinalist, was among 12 regional finalists who were also honored.

The four state semifinalists are:

[Video not showing up above? Click here to watch » https://www.youtube.com/watch?v=Fsqn6UQxe80]

In the coming weeks, a selection committee from the Division of Elementary and Secondary Education will visit the schools where the four teachers work, conduct classroom observations and interviews with them, and talk with their school administrators.

The winner will be announced later this year.

In addition to receiving cash awards, the winner will spend the 2021-22 school year on paid leave to compete for the National Teacher of the Year honor, serve as an ex-officio member of the Arkansas Board of Education and travel the state to participate in teacher and student programs.

Joel Lookadoo, a ninth grade algebra II teacher from the Springdale School District, is the 2020-21 Teacher of the Year.

Education Secretary Johnny Key said the inclusion of library media specialists is a testament to the influence that teachers of the year can have over public policy.

"One of our prior teachers of the year, Meghan Ables, brought the idea to us," Key said in opening remarks at Friday's reception. "She said, 'You know what, library media specialists are not eligible under Arkansas law to be Teacher of the Year and we need to change that.' Any of you who know Meghan know that she does not take no for an answer."

Key said Ables lobbied the General Assembly to include the category, resulting in legislation that was signed into law by the governor.

"So the power of teachers goes beyond the classroom and goes all the way to the halls of the Arkansas State Capitol," he said. "That's how important this day is."

Gov. Asa Hutchinson noted that Friday's event was the first major event to be held at the Governor's Mansion since the covid-19 pandemic forced the closure of schools, businesses and government offices throughout the U.S. and sent the economy into a nosedive.

"The Governor's Mansion has missed people," Hutchinson said. "To see one of our first engagements like this since the pandemic began really reflects the importance of this occasion."

Hutchinson reflected on the progression of education as teachers first teach students the alphabet, then how to read, write, form sentences and paragraphs, and eventually how to inform themselves about the world at large.

"Someday, some of them will write great speeches, novels or biographies," he said. "They will write poems or operators manuals. Some of those students whose lives you've poured yourself into will touch the lives of dozens, maybe thousands of others. ... That's the power of teaching."

The Teacher of the Year's tenure runs from July 1 to June 30, with that person becoming a nonvoting member of the state Board of Education, being involved in education policy discussions and having the opportunity to affect policy decisions.

"We use the Teacher of the Year to help promote the profession, to really be a voice for teachers, to help us understand what teachers are facing and dealing with out in the field," Key said. "That helps as we prepare for changes in legislation, changes in policy, financial issues that teachers deal with, and they will be a very strong voice for teachers that we have embedded in our department."

Brickey said that she was honored to have been selected Teacher of the Year of her district and region, and now as a semifinalist. She said that as a library media specialist she has the opportunity to connect with all the students.

"I not only get to connect them with books that would lead to them to become lifelong readers, but with our maker space I'm able to give them voice and choice and for them to build on natural talent and maybe hobbies that they didn't know about," she said. "That's my favorite part."

Henderson said she is a new arrival to Arkansas, this being her first year after having taught in Oklahoma for 14 years, and she said she immediately saw a big difference between the two states' approaches to education.

"There's not just the emphasis that Arkansas puts on education, but how they fund it and organize their schools and empower their teachers has really amazed me," she said. "So I feel even more honored to be a part of this group of educators."

Post said her emphasis as an alternative school educator is to help students who are in danger of falling by the wayside find their way back on track to a successful educational experience.

"A lot of the students that come to my school aren't there by choice," she said. "It's so neat to be a part of rebuilding their confidence in themselves, and as a math teacher, in their ability to problem-solve and begin to help them dream about future career opportunities."

Hardin said the pandemic has placed a focus on teachers and what they do, which she said she believes has given people greater appreciation for what teachers do on a day-to-day basis. She said the opportunity to be a positive influence in her students' lives is what drew her to teaching.

"What we do really allows some child somewhere to exercise agency in their life," she said. "It gives them an opportunity to have choice and to say I can rise above this, I have an education and nobody can take that away from me."