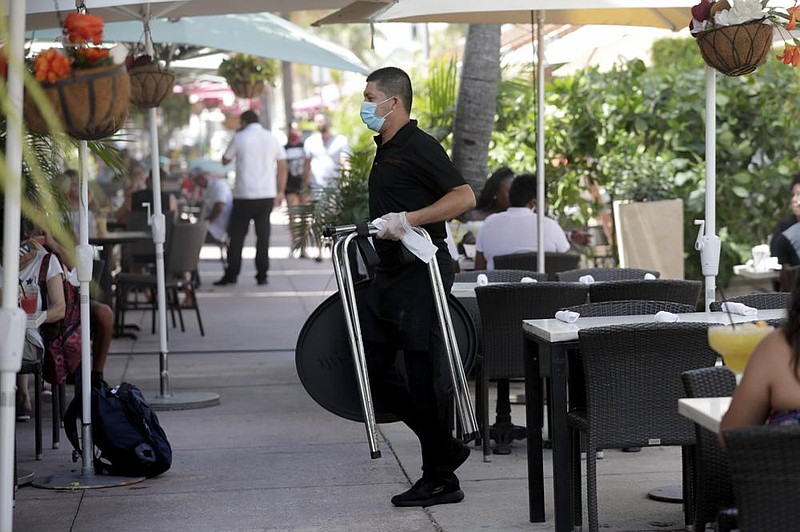 A waiter in protective gear works last month at a restaurant in Miami Beach, Fla. Income for U.S. workers fell 1.1% in June, as the coronavirus recession took a toll on businesses and employees. (AP/Lynne Sladky)

U.S. incomes fell more than expected in June as the effects of the government's one-time stimulus checks dissipated, though an increase in unemployment-insurance payments softened the blow.

Personal incomes declined 1.1% from May, a Commerce Department report showed Friday. The median estimate in a Bloomberg survey of economists called for a 0.6% drop. Consumer spending increased 5.6% in June, after jumping by the most on record a month earlier.

For the April-June quarter, pay and benefits rose 0.5%, according to the government's Employment Cost Index. That is down from 0.8% in the first three months of the year. Wages and salaries rose 0.4%, while benefits jumped 0.8%.

While the income decline in June reflected the continued unwinding of April's sharp gain from one-time stimulus, unemployment-insurance payments actually increased in June by an annualized $111 billion -- likely reflecting states working through backlogs of applications, even though joblessness has fallen. That increase, stemming mainly from the federal government's supplemental $600 in weekly jobless benefits, highlights the importance of the payments that expired Friday.

A separate report Friday showed consumer sentiment deteriorated in late July, in part because of the stimulus bill impasse on Capitol Hill as well as the increase in virus cases. The University of Michigan's final gauge for the month slid to 72.5 from a preliminary reading of 73.2.

At the same time, a gauge of Chicago-area manufacturing expanded last month for the first time since May of last year as orders and production moved back into expansion territory.

The Commerce Department's report showed wages and salaries rose 2.2%, reflecting rehiring as more businesses reopened across the country, though such compensation remained well below pre-pandemic levels.

Employers shed 22 million jobs in March and April before rehiring about one-third of those workers in May and June. That has left the unemployment rate at 11.1%, one of the highest rates since the Depression. With the unemployment rate so high, workers who still have jobs have less ability to resist pay cuts or demand raises.

If rehiring fails to come back quickly, a steep drop-off in federal support for the jobless could have significant implications both for incomes and ultimately personal consumption, the lifeblood of the U.S. economy, in the coming months.

Even though consumer spending posted a record increase in May and rose again in June, the level of spending remains below pre-pandemic levels. A Commerce Department report out Thursday showed inflation-adjusted personal spending fell at a record 34.6% annualized rate in the second quarter, with outlays for services plummeting at a 43.5% pace.

Real spending climbed 5.2% in June after surging 8.4% a month earlier. The increase in outlays in June was broad-based, reflecting an 8.8% jump in durable goods and a 5% pickup in services.

The personal savings rate, which had surged to a record in April as a result of the rise in government social benefits, fell for a second month to 19% from 24.2%.

The gauge of consumer prices that the Federal Reserve officially uses for its target rose 0.8% in June from a year earlier, well below the central bank's 2% goal. The core price index, which excludes more-volatile food and energy costs, increased 0.9%.

Information for this article was contributed by Reade Pickert of Bloomberg News and by Christopher Rugaber of The Associated Press.