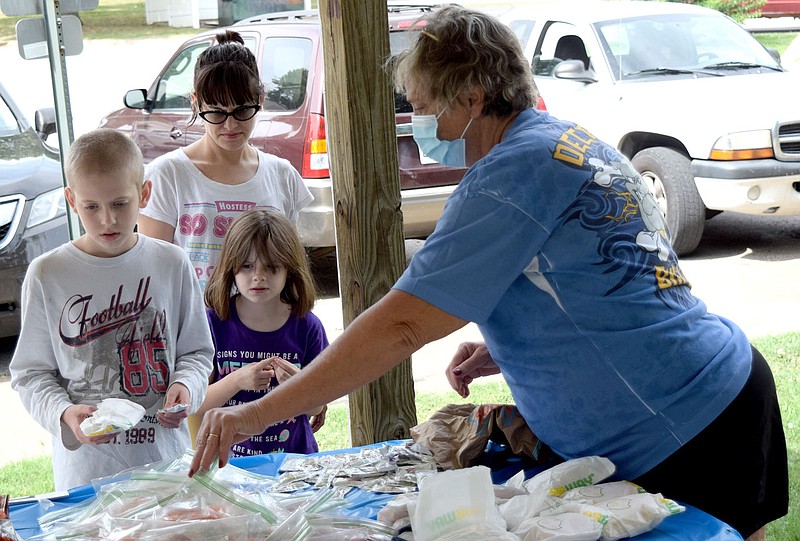 DECATUR — Since its conception two years ago, Pathways to Progress continues to work to help the community grow and prosper.

Pathways to Progress held its second Food for Kids meal program July 20 at the Roller Avenue and Garden Walk apartments in eastern Decatur. Pathways partnered with local restaurants such as Subway and with McKee Foods to provide a meal for area kids 18 and younger.

In 2018, Shanna Tucker, a Decatur native, was approached by Mayor Bob Tharp to form an organization to help promote the city growth and help its 1,700 residents get the help they need for everyday life. Pathways descended from the old Friends of Decatur committee Tharp formed shortly after taking office in 2015.

The Friends of Decatur was never able to get organized, which lead Tharp to start a different group to help meet the needs of its residents, giving birth to the Pathways group.

Early in 2019, Pathways received its 501(c)(3) nonprofit status from the Internal Revenue Service. This allows donors to contribute to the organization with the ability to deduct the donations from their taxes.

(3) that worked with the community through a nonprofit organization and be able to help make improvements for not only Decatur but the surrounding area,” Tucker said. “We formed Pathways to Progress, which is not affiliated with the city, but we work with them for the good of the community.”

The group’s first project was a bike giveaway. Bikes were donated to the organization to distribute to school children who need a way to travel around the city and to have a little fun in the process. It was a huge success, with more than 30 bikes going to kids. Pathways also helped hand out cookies and hot chocolate during the December 2019 Kansas City Southern’s Christmas Express train visit to the Decatur Depot.

Two projects that the Pathways group, consisting of five members, is working on is a food drive and a new food pantry.

“We are going to do four food drives over the course of three months and then reevaluate to see if we need to do less or more drives in the coming months,” said Tucker. “This first period will lay the foundation for the coming years.”

Pathways partnered with the Decatur Girl Scout troop, which had a food pantry next to Decatur Pawn, to start a food pantry in a location that will be more accessible to the community.

During the July 13 City Council meeting, Tucker presented a plan for a new location to council members and it was decided to move the pantry to the south end of Decatur City Hall.

By early August, the Pathways and Girl Scout food pantry will be up and ready for area residents to take what they need to put good home-cooked meals on the table, as well as receiving donations of food stock.

Donations to the food pantry can be dropped off at the box at city hall once it is up and operational. Tucker said only certain items will be accepted.

“The food pantry will be for nonperishable food items only,” Tucker said. “We will not have any refrigeration available so we can only take canned goods or things that are shelf-stable. We can also take items like jars, condiments or anything that bugs can’t get into and are sealed up and last a little while.”

Pathways to Progress has already made a huge difference in the Decatur community and, with the help of local businesses, families and individuals, will continue to serve the needs of area residents in the coming years. For more information on Pathways to Progress or to become a member, call the city hall at (479) 752-3912, option 4.

Mike Eckels may be reached by email at [email protected] .