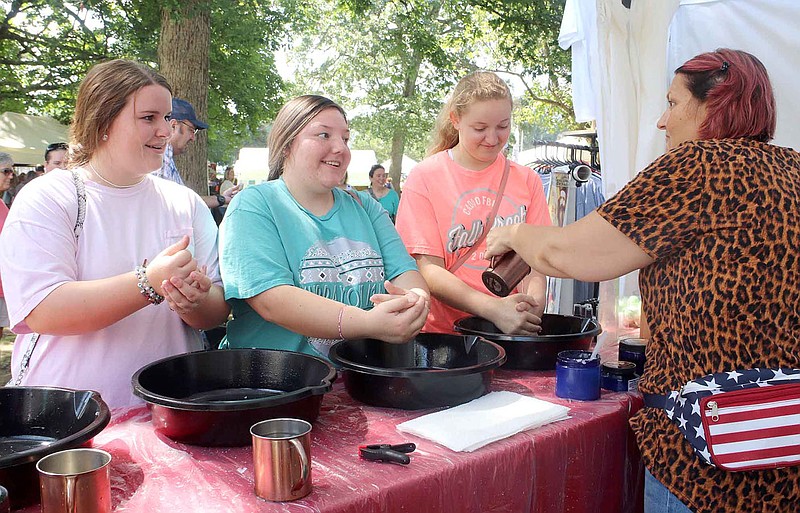 FILE PHOTO The Mountain Man scrub booth was one of about 130 vendors at the 68th Clothesline Fair last year. Prairie Grove Lions Club has canceled this year's Clothesline Fair and looks forward to seeing everyone in 2021.

PRAIRIE GROVE — It wasn’t unanimous but Prairie Grove Lions Club voted last week to cancel the 2020 Clothesline Fair for safety reasons because of the covid-19 pandemic, according to president Casey Copeland.

In a Facebook post for the Lions Club, Copeland wrote, “This difficult decision was made based on constant and growing concerns for the health and safety of our vendors, guests, volunteers, park staff, and the community at large. The decision was also based on considerations of the enormous task putting on the CLF would be for our volunteers and vendors under the current health directives.”

Lions Club member Rick Reed said he believes this is the first time the fair has been canceled.

“We’ve had bad weather but that didn’t stop it,” said Reed, who’s helped with the Clothesline Fair every Labor Day weekend since 1975.

Copeland said the vote was 7-4 to cancel, but several members were absent. He said he believes some of those members also would have voted not to have the fair.

Copeland said he didn’t have to cast a vote because there wasn’t a tie to break but noted he was not sure how he would have leaned.

“My job being a lawyer is that I’m trained to look at both sides,” Copeland said. “I wanted to have the fair but did not want to create a conflict with the state park’s office.”

In a Zoom meeting with officials from the Arkansas State Parks system last week, Copeland said they encouraged the Lions Club to be cautious and considerate of health concerns.

“They expressed significant concerns about it,” Copeland said.

Reed said he voted to cancel this year’s fair with the hope to be in “full swing” next year.

“Bringing a lot of people to Prairie Grove from all over, that’s a danger and a risk,” Reed said.

The Arkansas Department of Health approved the Lions Club’s health and safety plan for hosting the Clothesline Fair but turned down the club’s request for three exemptions from the requirements for large gatherings.

The club requested an exemption from the capacity limits, mandated masks and the enforcement of traffic flow at the event. The exemptions were based on the fact Prairie Grove Battlefield State Park is an open space and the club would not be using indoor spaces or close seating.

The club also asked for the opportunity to make changes to the plan in accordance with the directives and suggestions from the health department.

“The exemption requests were kinda important for us to put it on,” Copeland said, noting it would be hard to wear a mask outside for three days during the heat in August.

Copeland said the Lions Club also would have had to recruit many volunteers to help with the event to man three entry points and police the grounds to make sure patrons followed the restrictions for social distancing and masks.

Club members were concerned about the image of the group if they had to enforce the rules.

“That would have fallen on us,” Copeland said. “That is not something we would want.”

Copeland said he knew having the Clothesline Fair this year would be a lot of work but he had his “fingers crossed,” the number of positive cases would go down.

“Instead, it’s gone the other way,” Copeland said.

The Lions Club will continue with one of its missions to raise money for college scholarships for Prairie Grove graduates. It presents four $500 scholarships each year.

“If the Lions Club sponsors events, we hope the community will continue to support us,” Copeland said.

Lynn Kutter may be reached by email at [email protected] .