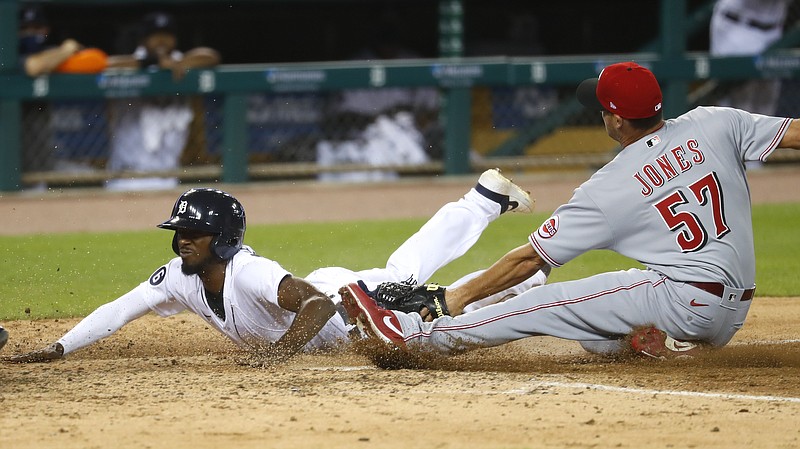 KANSAS CITY, Mo. -- Adam Engel hit a three-run home run in the second inning Friday night, and that was all the offense the Chicago White Sox needed in a 3-2 win over Kansas City that spoiled the Royals' home opener.

Dallas Keuchel (Arkansas Razorbacks) picked up the win for the White Sox. Alex Colome converted his first save opportunity.

Kuechel (2-0) worked out of trouble seemingly the entire game. He retired the Royals in order in only one inning, and allowed just two runs on seven hits in 51/3 innings. He walked one and struck out three.

Kris Bubic (0-1) settled down after struggling early in his big league debut for Kansas City. He allowed three runs (two earned) on three hits. He walked one and hit James McCann (Razorbacks) twice.

Bubic worked his way out of trouble in the first inning, getting a 5-4-3 double play. He wasn't as fortunate in the second. Eloy Jimenez reached on an error by second baseman Nicky Lopez. After Luis Robert reached on a fielder's choice, Bubic hit James McCann on the head with a pitch and Engel followed, blasted his first home run of the season into the White Sox bullpen.

The Royals answered with one in the third, but left the bases loaded. Lopez got Kansas City's first hit with one out, and he advanced to second on Adalberto Mondesi's two-out infield single. Salvador Perez drove in Lopez with a single to left. Jorge Soler walked, loading the bases, but Maikel Franco popped out to first, ending the inning.

Keuchel entered the sixth with a two-run lead, but that was cut in half when Ryan McBroom hit his first career home run, a 426-foot blast to left-center.

YANKEES 5, RED SOX 1 Aaron Judge homered for the third consecutive night, Jordan Montgomery cut up one of the league's hottest lineups in his 2020 debut and New York beat Boston in the Yankees' first home game of this season.

ORIOLES 6, RAYS 3 Anthony Santander hit an odd home run off Blake Snell and had three RBI to help host Baltimore beat Tampa Bay. The Orioles trailed 2-0 in the fourth inning before Renato Nunez doubled and Santander followed with a drive to center. Kevin Kiermaier backed up to the wall, leaped and stuck his glove high above the 7-foot barrier. The center fielder timed his jump perfectly, but the ball glanced off his mitt and dropped over the wall.

TIGERS 7, REDS 2 Spencer Turnbull and the Detroit bullpen combined on a three-hitter, Austin Romine and Travis Demeritte each drove in two runs and the Tigers beat visiting Cincinnati.

BRAVES 11, METS 10 Former Mets catcher Travis d'Arnaud drove in five runs, including three with a bases-loaded double that capped a five-run eighth, and host Atlanta rallied from a six-run deficit for a wild victory over New York.

PADRES 8, ROCKIES 7 Tommy Pham hit a three-run home run in the ninth after Fernando Tatis Jr. tied it with two outs, and San Diego rallied for a victory over Colorado to spoil the Rockies' home opener. Pham sent a fastball from closer Wade Davis (0-1) over the left-center wall on a 3-2 count to give the Padres an 8-5 lead. Davis got two quick outs in the inning before Tatis took him deep. 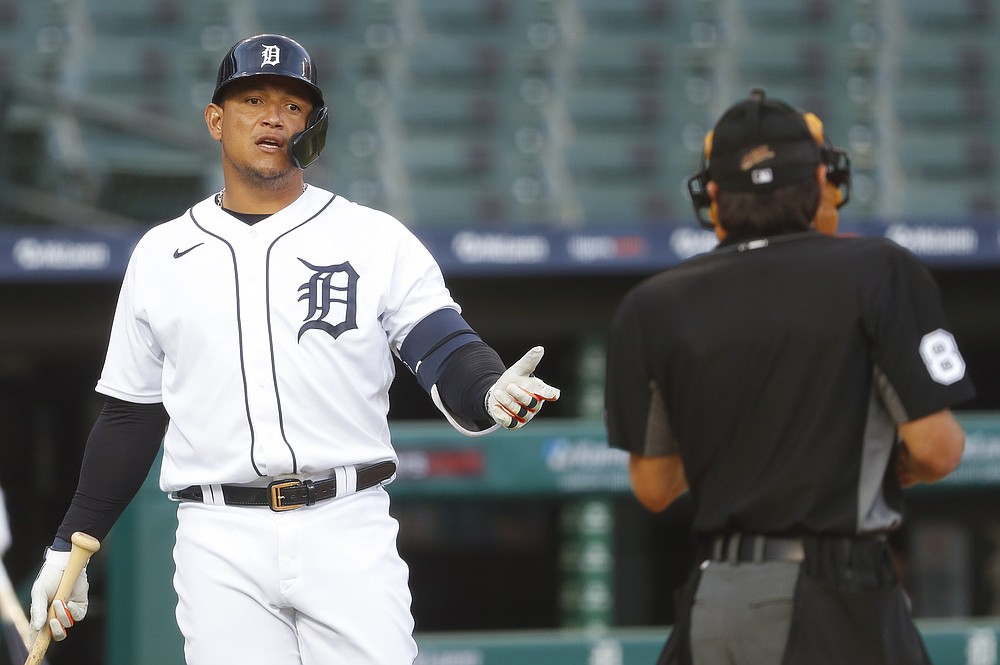 Detroit Tigers' Miguel Cabrera talks with home plate umpire David Rackley after striking out against the Cincinnati Reds in the fourth inning of a baseball game in Detroit, Friday, July 31, 2020. (AP Photo/Paul Sancya) 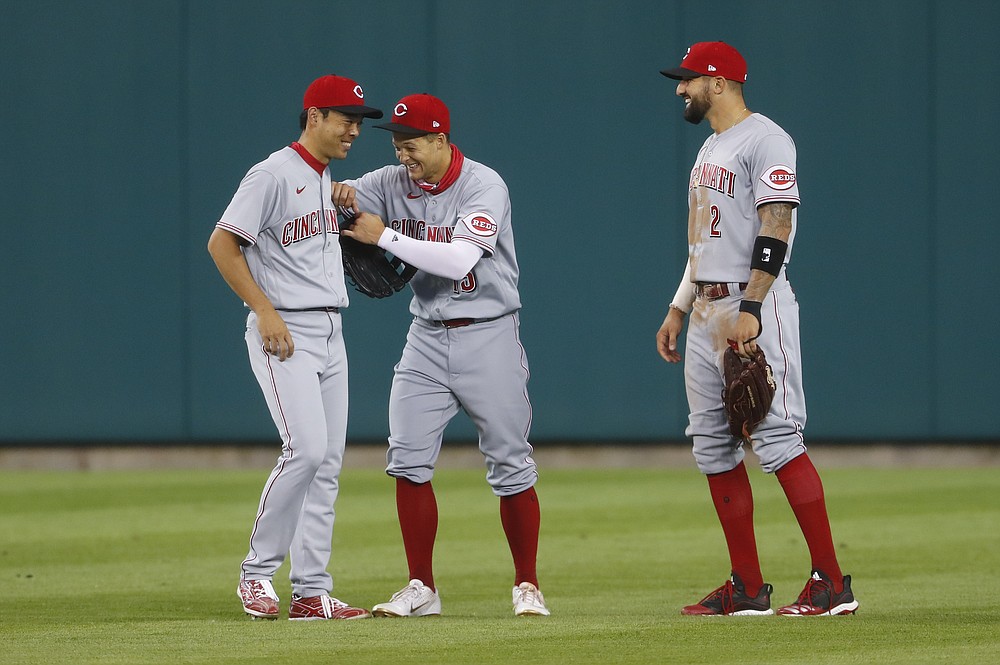 Cincinnati Reds outfielders Shogo Akiyama, from left, Nick Senzel (15) and Nicholas Castellanos (2) laugh together during a break in play in the seventh inning of a baseball game against the Detroit Tigers in Detroit, Friday, July 31, 2020. (AP Photo/Paul Sancya) 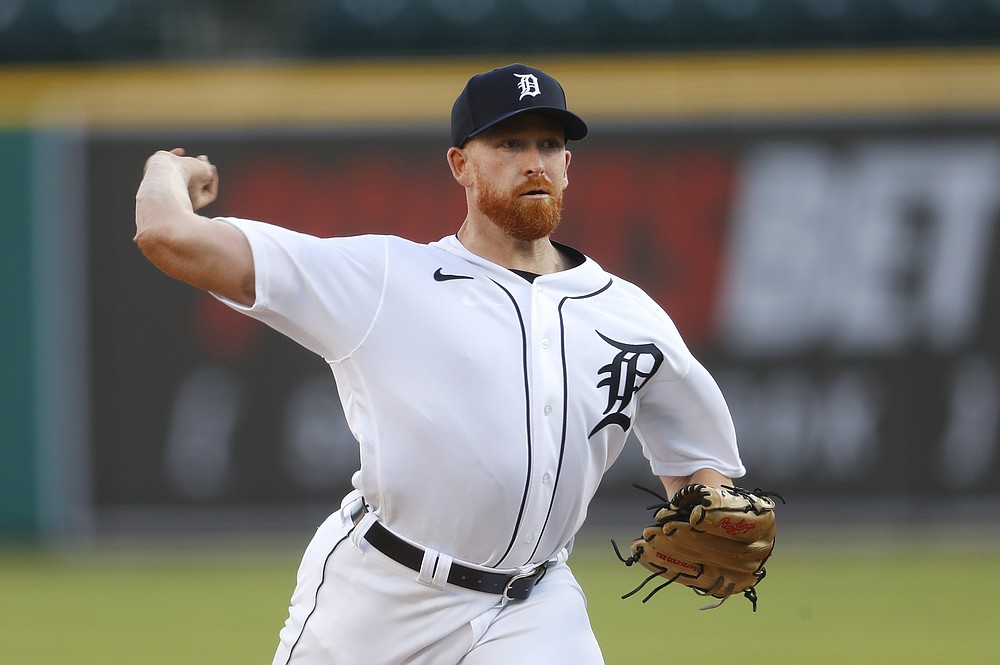